As the ferry broke away from the mainland and onto the cold Atlantic, I reflected about how different this trip was from the customary one I normally boarded from Malta to the sister island of Gozo. Both trips were 45 minutes long and both took place on a mid-sized ferry – but there, the similarities ended. I was, in fact, not going to the familiar, pretty island of Gozo in the Mediterranean Sea, but crossing the Atlantic Ocean from the seaside town of Oban, on the West Coast of Scotland, towards the Isle of Mull, one of the largest islands within the archipelago known as the Inner Hebrides.

My camera clicked madly as the crossing took us through a large number of small islands, both habited and uninhibited, which form part of this archipelago. Random ruined castles, modern lighthouses, tiny hamlets and small forests standing proudly amid the roar of the surf, filled my vision. I was definitely not in Kansas or the Maltese islands, anymore. 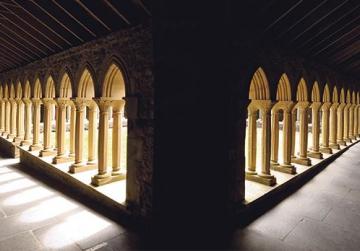 A view of the cloisters of Iona Abbey.

The one-day trip to visit three of the most famous islands within the Inner Hebrides had not been a spur of the moment decision. We had, in fact, booked and paid for it online weeks before actually setting foot on Scotland in order to make sure that the date was solidly set beforehand. We were lucky in that we managed to visit during the last week of September, since passage for tourists to two out of the three islands we were visiting, is never possible during winter time. Bookings were accepted up to the beginning of October, subject to weather conditions of course.

Leaving our rented car parked snugly at Oban, we collected our combo-tickets from the ticket office and set off towards the Ferry Terminal Railway Peer. There are a number of cruise companies which offer combo tickets at not much more than £45 per person. Such tickets usually include all the ferries to and from the specific islands one wishes to visit, as well as any possible coaches or buses and the relevant guides. In our case, we opted to visit the Islands of Mull, Iona and Staffa.

The ferry, which sported a wine bar and cafeteria, made port at Craignure on Mull, the second largest island in the Inner Hebrides after the Isle of Skye.

We were greeted by our coach-driver and guide, who was herself a native of Mull and who proceeded to drive us around the picturesque island for around an hour, recounting anecdotes about the various ruins, legends and even personages who had lived there.

I must admit that, without her lilting cheerful voice narrating so many colourful stories, I might have started to feel a little cramped at this point. This was because we had no time to stop anywhere or to walk around and visit Mull properly, since we had to travel directly to Fionnphort on the other side of the island in order to catch yet another ferry to the Isle of Iona. 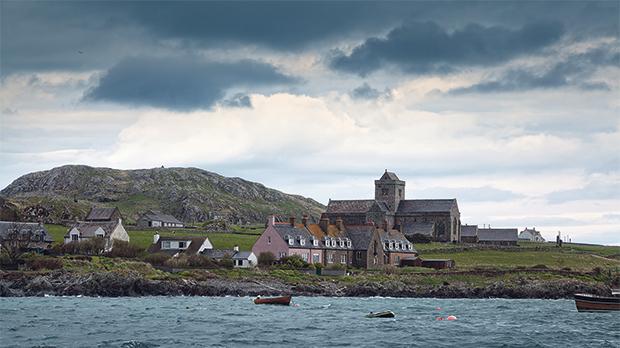 The day was cloudy, windy and quite cold and the gentle Scottish rain pattered on the windows of the coach, making it impossible for us to take any photos along the way.

We could still admire the isle itself, though. A lush picturesque symphony of moorland, mountain scenery and coastal views, dotted with small cottages and many sheep. Our guide informed us that on Mull there were, in fact, three sheep for every human being.

The ferry we boarded at Fionnphort was markedly smaller than the first one. There was a middle space reserved for one or two small cars and some railings for pedestrians to perch on at the sides.

The presence of the wind was much more pronounced on such a small craft. A couple of dogs yapped steadily as we bobbed up and down towards the smaller, yet more well-known island of Iona. Renowned for its natural beauty, Iona is famous for its Abbey, which is one of the most elaborate and best-preserved ecclesiastical buildings surviving from the Middle Ages. 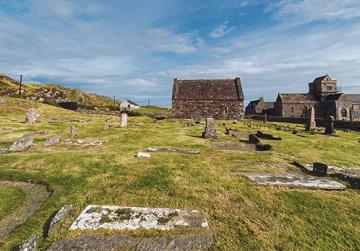 The Abbey is of particular historical and cultural interest in that it was here that St Columba, who brought Christianity to Scotland from Ireland, settled and built his first monastery. It is also the place of origin of the wondrous Book of Kells, an illuminated manuscript which is today kept at Trinity College in Dublin.

Personally, I am not much of a religious pilgrim. Yet, history, art and architecture fascinate me, which is why the Benedictine Abbey of Iona attracted me so much. The medieval arches, romantic columns and amazingly crafted stained glass windows were the perfect complement for the natural landscape of the Hebrides.

Shaggy highland cows with long horns and a peaceful expression looked at me quizzically while I breathed in the salty air and strolled along the rugged beach directly behind the Abbey.

William Wordsworth, John Keats, Lord Tennyson and Queen Victoria all expressed amazement after visiting it. Pink Floyd even named one of their earliest unreleased songs after the cave

The chill actually got to me at this point. I was very happy to purchase a pair of white cotton ear-muffs from the Abbey’s souvenir shop itself. I must have been quite a sight. Perhaps, that’s why the cows were staring at me.

After having lunch at one of the handful of small pubs on Iona, we prepared for the highlight of the day – the trip to the mythological tiny island of Staffa and the visit to the legendary Fingal’s Cave. Being part of a Nature Reserve and managed by the National Trust for Scotland, Fingal’s Cave is a unique natural monument formed entirely of hexagonally jointed basalt columns, similar to the Giant’s Causeway in Ireland, which I had visited a couple of years back.

We boarded a very small boat with a capacity of not more than 25 people. The wind had really picked up at this point and I started to get a tiny bit worried. What’s more, before starting the craft, the captain said that he had to inform us that the crossing would not be an easy one and that, in fact, some people from an earlier cruise had been pretty sick.

Going to the Isle of Staffa and back was going to take us approximately an hour and a half. He asked us if there was anyone who preferred to remain on land and be reimbursed the trip, since he would not be taking responsibility for any accidents. Five people got off the boat. I confess I was scared. My boyfriend was looking at me worried. I gritted my teeth and sat down. How bad could it get?

All went well, at first. The wind was behind us, so the boat crested the waves blithely and I got used to the rock and roll motion of the deck. It was fun, actually. The waves sprayed all over us as we tried to keep steady enough to use our cameras. There was so much to take in. 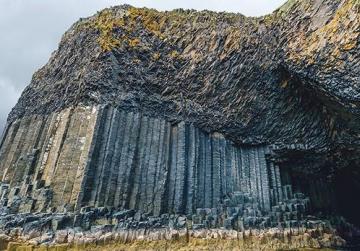 Fingal’s Cave on the uninhabited island of Staffa.

The Inner Hebrides consist of 35 inhabited islands and 44 uninhabited ones, and Staffa is one of the latter. As we took in the blueness of the sea and sky around us, caught between them like flies in amber, our captain told us of the facts and legends surrounding Fingal’s Cave. The 72 feet tall and 270 feet deep cave itself was known to to the ancient Irish and Scottish Celtic people as Uamh-Binn, meaning ‘the Cave of Melody’, due to the eerie sounds which emanate from its arching cathedral-like features when the wind and the echo of the waves sound just so.

Legend has it that the Irish warrior and leader Fionn Mac Cumhaill, who was as big as a giant, built a bridge here between the Isle of Staffa and the Giant’s Causeway in Ireland in order for him to reach his nemesis and rival Benandonner.

The legend, which connects the two structures, is geologically correct in fact, as both of them were created by the same ancient lava flow, which may have, at one time, formed a bridge. We are talking of around 60 million years ago here, so there were no human beings around to see it at the time.

As we got closer and closer to the islet and to the cave itself, anything seemed possible. The cave has a large arched entrance and is filled by the ocean. When I had booked our cruise, we had been promised that we could actually land on the island and walk the short distance to the cave, where a row of fractured columns form a walkway just above water level, permitting exploration on foot. Unfortunately, the captain at this point informed us that the sea was becoming too rough and that landing was dangerous. So, we had to be content with looking closely at the island from the sea. We didn’t even enter the mouth of the cave.

I admit that I was, and still am, bitterly disappointed about this. Scottish weather is fickle and changeable, however, especially at sea, so there was nothing to be done. It was after all the end of September. I would strongly recommend anyone who would like to visit the Hebrides to go during high summer when the weather is calmer.

Seeing Fingal’s Cave, even from afar, was a great experience. No wonder the famed composer Felix Mendelssohn was inspired to create The Hebrides Overture, also known as Fingal’s Cave, after visiting in 1829!

Famous landscape painter J.M.W Turner painted it, William Wordsworth, John Keats, Lord Tennyson and Queen Victoria all expressed amazement after visiting it and Pink Floyd even named one of their earliest unreleased songs after the cave.

Coming back, all the feelings of awe and amazement totally fled. The sea had gotten even rougher and this time the boat was going against the wind. I don’t usually suffer from sea-sickness but the trip was truly a nightmare.

I sat down in a corner, held on for dear life and ended up hugging a fire hydrant in an effort not to fall or roll off as the huge waves crashed against the tiny boat.  Those were the longest 45 minutes of my life.

After our arrival at the Isle of Mull, we still had to endure an hour-long trip in the coach, and another 45 minutes on the ferry from Fionnphort back to Oban where we had left the car.

It wasn’t an easy journey to say the least, but the enchantment of Fingal’s Cave, the charm of the Inner Hebrides and the depth of emotion I felt there will be truly remembered forever. As will, unfortunately, the hellish boat-ride amid the stormy Atlantic Ocean.