Wied Żnuber is a small valley situated amid the heavily industrialised estate of Ħal Far. As one proceeds across the many factories towards the quiet rural valley, one can appreciate the stark difference between these two settings within the same area. 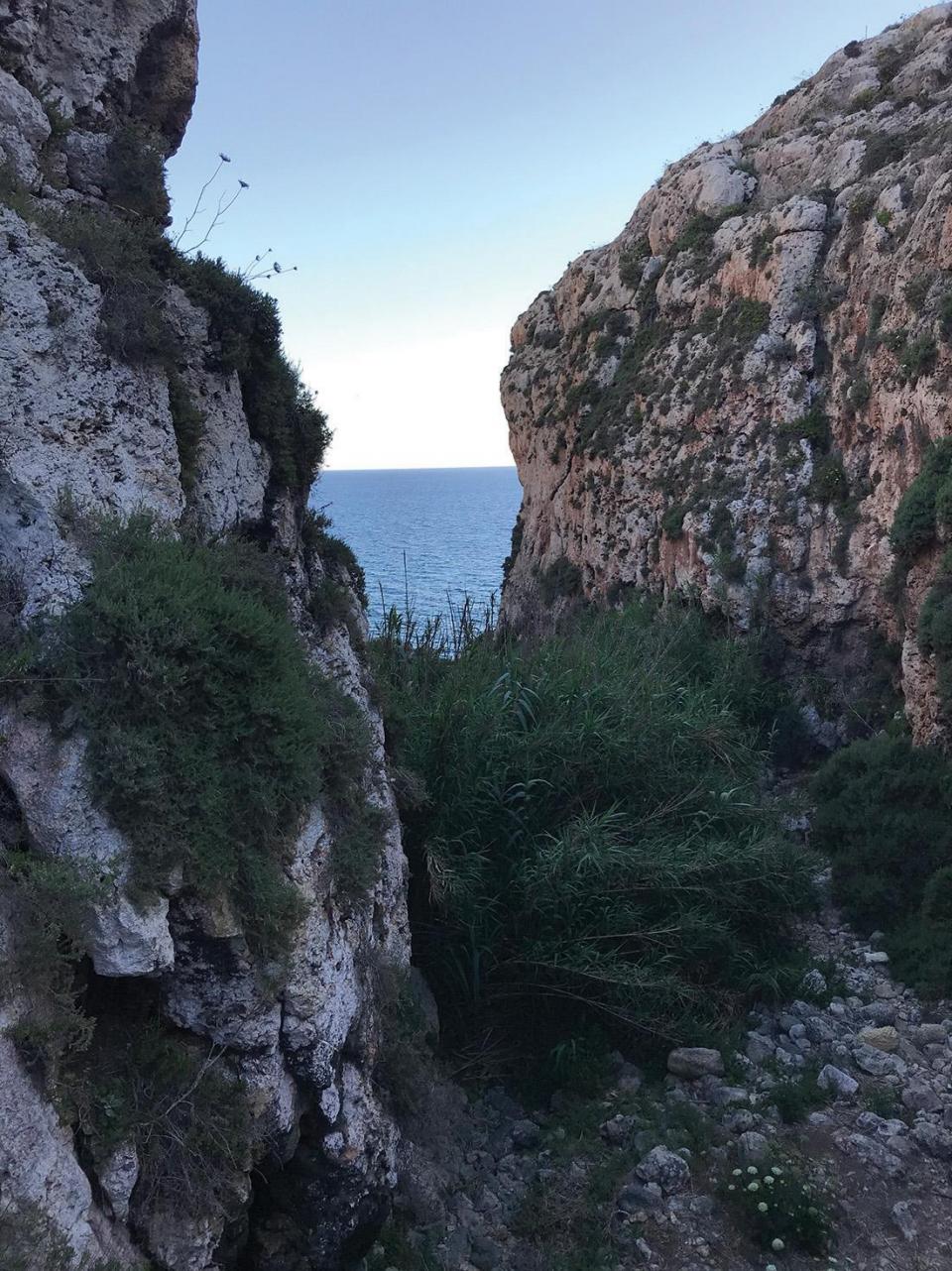 This valley leads down to the sea through a narrow and deep cleft in the face of Ħal Far cliffs. Hence, it provides an easily accessible inlet within the inhospitable cliffs making up the island’s southwest coast.

This inlet appears to have attracted a number of unwanted corsair incursions in the past, so much so that in 1654, a certain Cesarico Violandi was obliged to construct ‘una muraglia che sia sufficiente per impedire la salita di Turchi’ (a mural high enough to stop Turks’ ascent). Nowadays, there appears to be no remains of this 17th-century wall, as it was most probably replaced by the larger defensible masonry stop wall erected by the British Empire in the 1890s.

During the late 19th century, following the opening of the Suez Canal, Malta found itself in the middle of an important route between Europe and the East.

Wied Żnuber represented a weak gap within the southwest boundary of this defensive scheme. As a result, this issue was addressed by plugging this valley with a stop wall.

Wied Żnuber stop wall is reached by means of a set of rock-hewn steps within the rocky slope on the left side of the valley. The stop wall consists of two sections. The upper section comprises a short stretch of parapet wall with four musketry loopholes. Unfortunately, all of these musketry loopholes have lost their lintels. 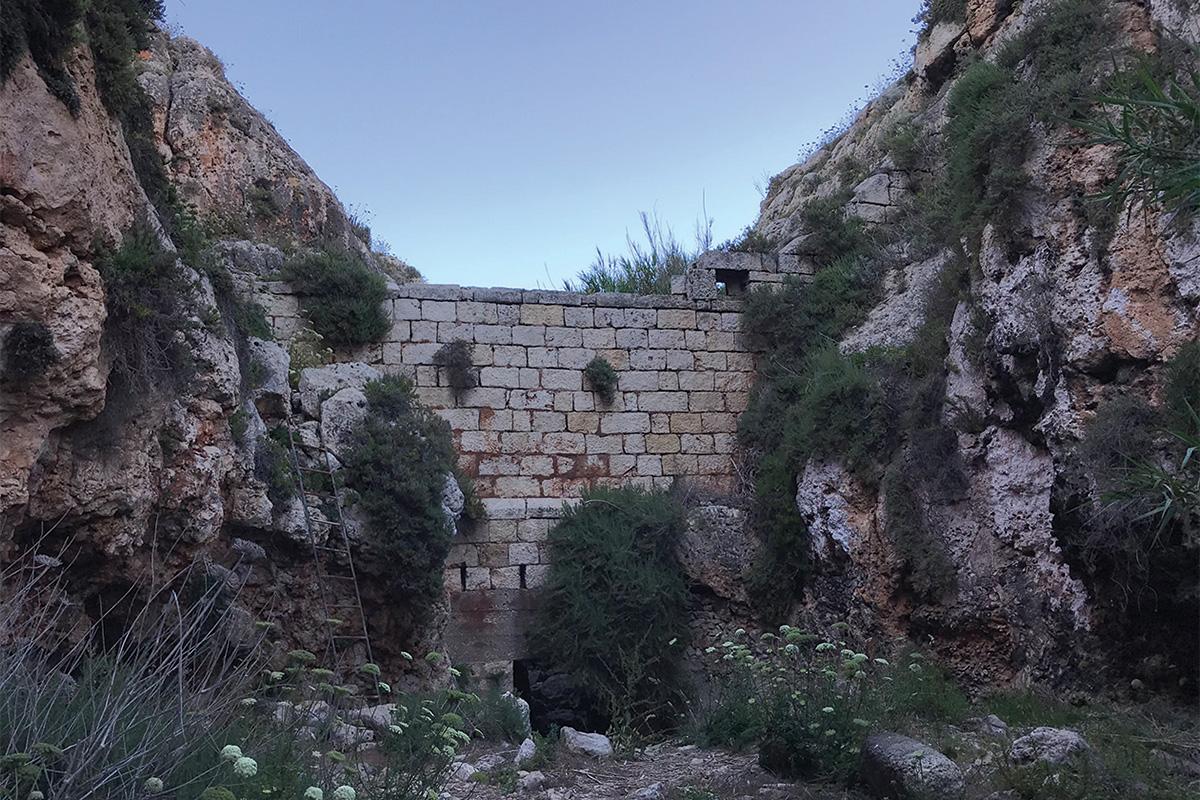 The larger lower section of the stop wall.

Apart from its defensive role, the upper section also served as a vedette, allowing soldiers manning this higher part of the defensible wall to have clear unobstructed views of the approaches of Wied Żnuber from the sea. 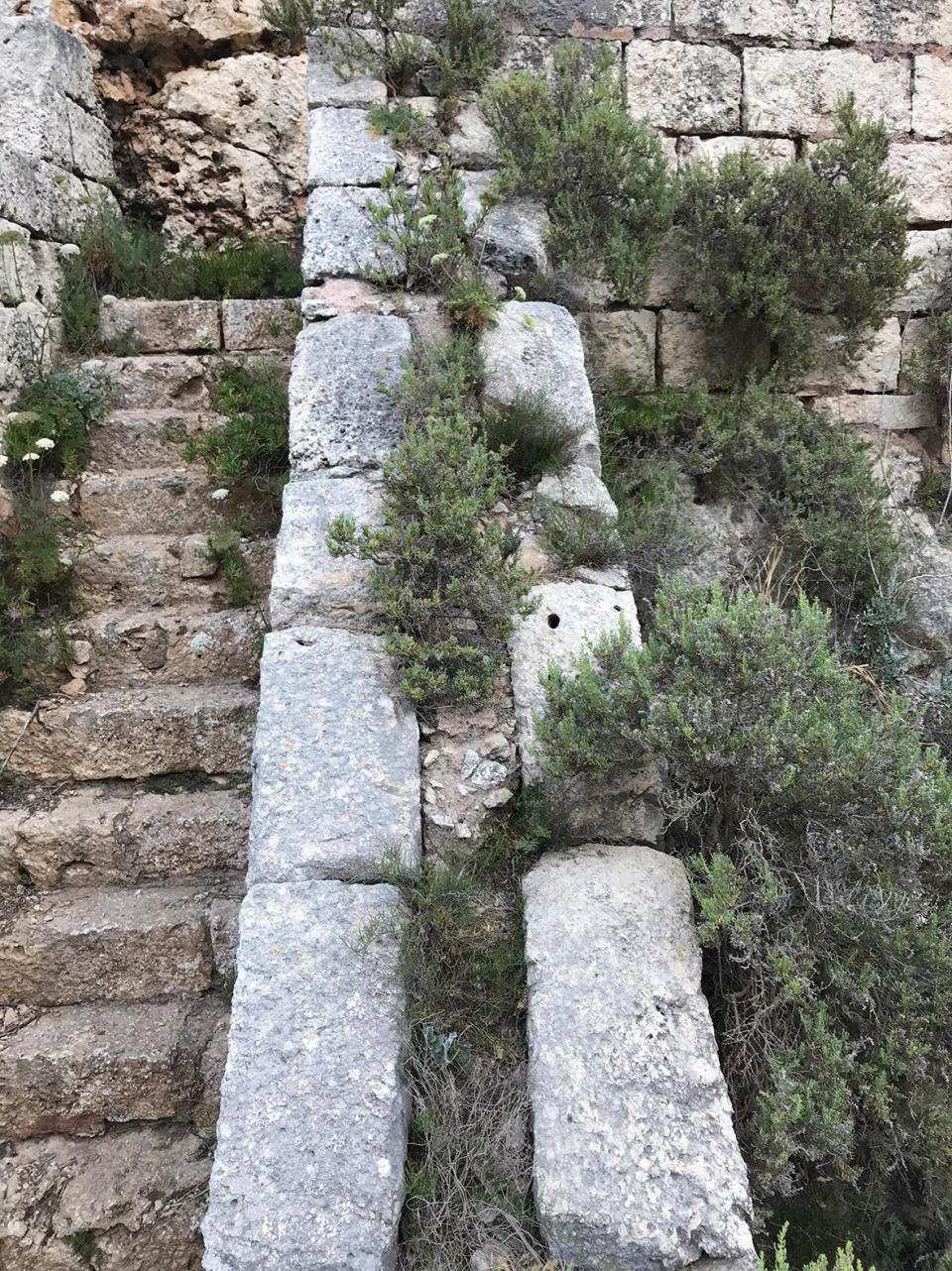 Details of the parapet wall. Note the two masonry outer walls consisting of lower coralline limestone blocks with rubble-fill in between, topped with a layer of lime mortar.

The lower section consists of a larger wall that runs across the valley and seals off the access up the valley. Just like the upper section, the lower wall was topped by a thick loopholed parapet. Regrettably, only one musketry loophole has survived from the lower part of the stop wall.

The musketry loopholes of Wied Żnuber stop wall were flared inwards i.e.: with an external narrow opening and a wide internal opening. This was achieved as the masonry blocks making up the parapet were carved and fashioned accordingly to provide soldiers with more space for movement and aiming, while remaining under cover. The upper and lower sections of the stop wall were connected together by means of a ramp and a set of steps protected by a parapet wall.

Continuous exposure to nature’s elements, vandalism and the lack of restoration interventions are threatening certain parts of this defensive wall

The stop wall was made up of two masonry outer shells consisting of lower coralline limestone blocks with rubble-fill in between. In some parts of the parapet, the rubble-fill was topped off with a layer of lime mortar. 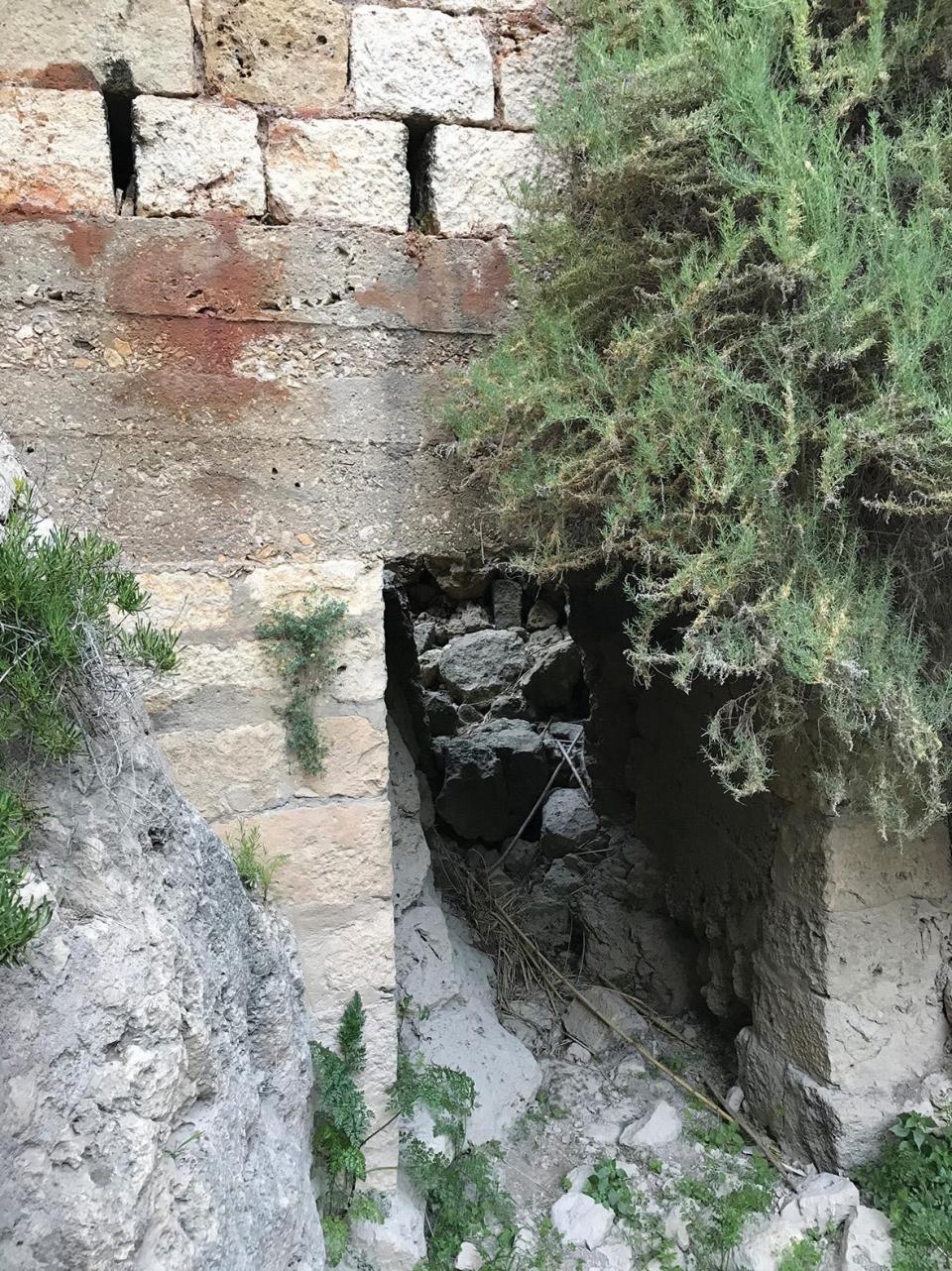 The culvert at the foot of the lower section of the stop wall served as an outlet for run-off rain water. Note the thick layer of reinforced concrete supporting the base of the stop wall.

It is interesting to note that there are traces of pozzolanic lime mortar pointing at Wied Żnuber stop wall. Pozzolana and deffun were added to the lime mixture to give the mortar enhanced waterproofing qualities.

In order to deal with the large volume of rainwater flowing down the slope of Wied Żnuber valley, a large rectangular culvert was created at the foot of the lower section of the stop wall. The base of this lower section is supported by a thick layer of reinforced concrete which lies over the culvert. This represents one of the earliest military structures to make use of reinforced concrete in Malta.

Other stop walls that were being constructed during the same time period i.e. the stop walls at Wied il-Faħam, Wied Anġlu and Binġemma Gap (which form part of the Victoria Lines) were also designed with similar culverts to allow efficient and adequate drainage of rainwater. The main difference is that the latter culverts were capped with a flat masonry arch instead of reinforced concrete.

The lower coralline limestone for this wall was quarried on site. On the left valley shoulder, one can find the remains of quarrying activity with various fornelli, remains of processed stones and various stone chippings that were dumped along the edge of the valley shoulder.

The fornello was a deep vertical hole drilled into the rock which was filled with explosives. When the explosive within the fornello was detonated, this generated shock waves that broke up the surrounding rock, generating stones for processing. 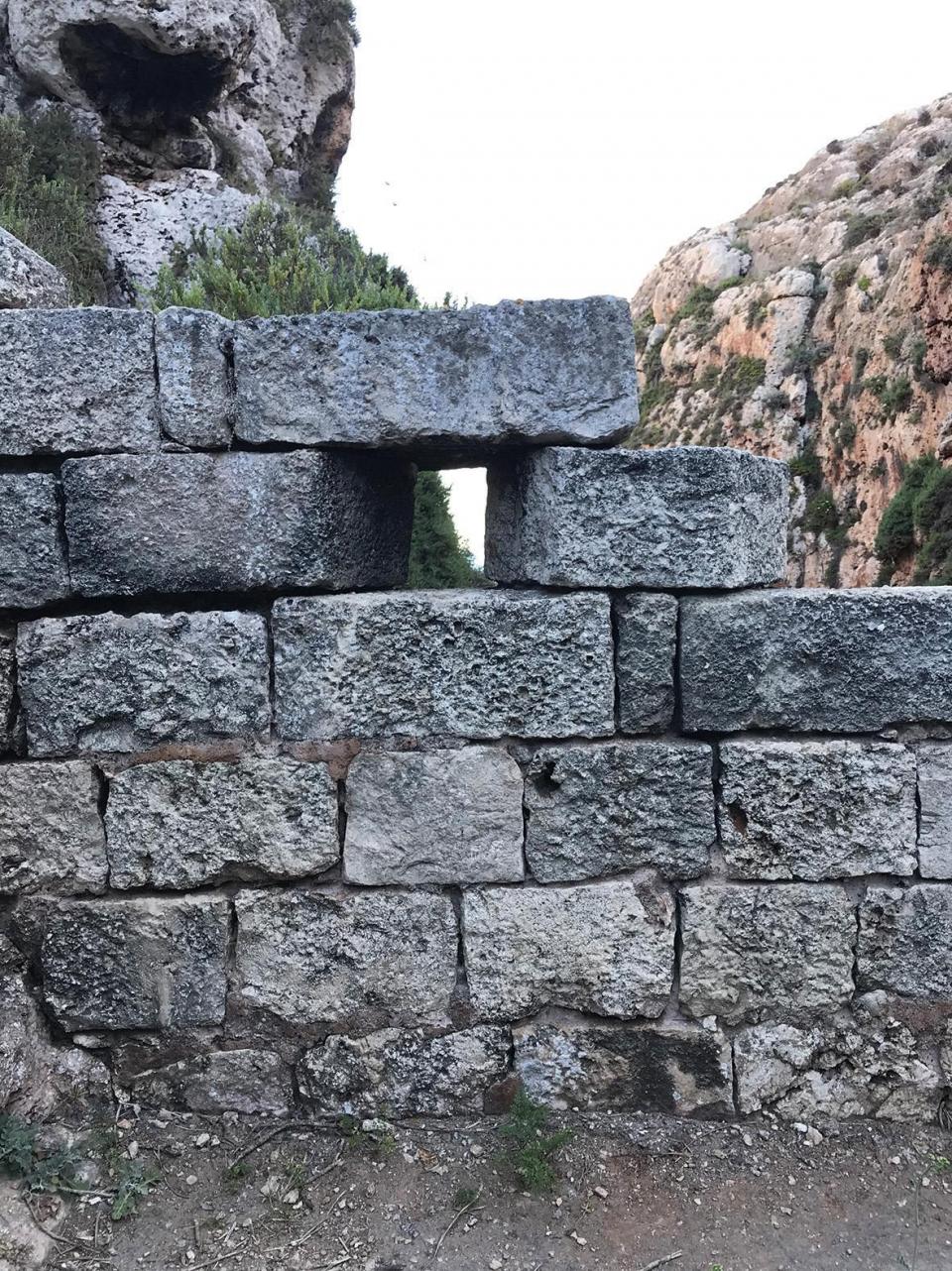 The only surviving musketry loophole within the parapet of the lower section of the Wied Żnuber stop wall.

In this quarry, one can still find traces of used as well as unused fornelli. The presence of this quarry close to the stop wall makes this site even more distinctive as it provides further information about the wall’s origins.

Notwithstanding the industrialisation of Ħal Far, this small valley and its stop wall have remained relatively unchanged throughout the years. Nonetheless, continuous exposure to nature’s elements, vandalism and the lack of restoration interventions are threatening certain parts of this defensive wall. Nowadays, this fortified wall is a silent sentinel boldly protecting a valley from a threat that has since disappeared.

The stop wall at Wied Żnuber documents a minor yet interesting type of fortification that should be appreciated and preserved for future generations.