Visitors to S.J. Fuerst’s latest exhibition will inevitably feel they have just tripped into a surreal world. 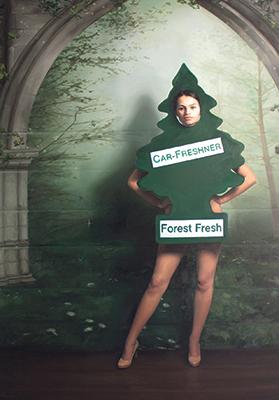 They are welcomed at Lily Agius Gallery, in Sliema, by a walk-through installation made up of 16 undecorated, artificial Christmas trees, along with a sound recording of birdsong and pine-scented air fresheners. As they roam around the space, they come across inflatable pigs and can admire large, quirky pop art-inspired oil paintings and fancy floppy discs.

“I like to momentarily take people out of reality and bring them into a playful, fantasy world,” the US artist, currently based in Gozo, says.

“I choose subjects people will recognise and connect with but present them in a way that perhaps they wouldn’t have expected. Hopefully, visitors will walk away thinking the exhibition and paintings were fun, beautiful and a little strange,” she continues. 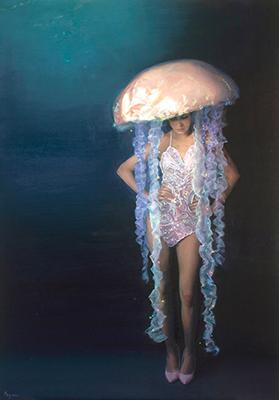 The title of her show, Forest Fresh, is taken from one of the works on display, featuring a model dressed up as a car freshener. Other paintings are inspired by the DreamWorks logo, with a female fisher in pyjamas, and by Darth Maul from Star Wars, starring a model wearing over-the-knee boots. There is also a representation of Circe from Homer’s Odyssey, surrounded by inflatable pigs and tigers, and a jellyfish that, on closer inspection, is a woman.

As a realist painter, Ms Fuerst painstakingly recreates her subjects, whether a model or an inflatable, taking six to eight weeks to complete a painting. Her effort is commendable as, at first glance, one might easily mistake her paintings for photography.

“Everything in my paintings exists just as I depict them. I think this makes a big difference,” she remarks.

The creative process starts when a toy or costume grabs the artist’s imagination. She then spends some time – which could mean months − to figure out the most interesting way to use that item in a painting. She is also very inspired by classical painting and fashion photography, with her favourite artists being John Singer Sargent, William-Adolphe Bouguereau, Jeff Koons and Tim Walker. 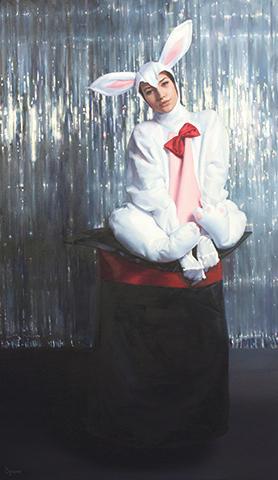 Once the idea for the painting has fully developed, she buys the costume and props and organises a photoshoot with a model.

“I take hundreds of photos to paint from and work from these to compose the final image, designing the expression and pose to best convey the mood I want in the piece,” she says.

Her models, who, she points out, wear mass-produced clothing instead of haute couture gowns, bring elegance and seriousness to what is usually “a very silly subject matter”.

The best part of using real inflatables is that she gets to keep all the toys.

“I am, thus, the happy owner of many life-size inflatable animals,” she admits.

A section of the gallery is dedicated to oil sketches on floppy discs. The idea to paint on them came from clearing out an old desk and thinking how sad it was to get rid of all the “cute disks”, which are now useless.

“I wanted to find a reason to keep them and painting on them was a natural choice for me,” Ms Fuerst notes. “Brightly-coloured floppy disks are also very visually appealing, so the end result becomes more than just a portrait study; it’s a way to celebrate a piece of pop culture from the not-too-distant past.” 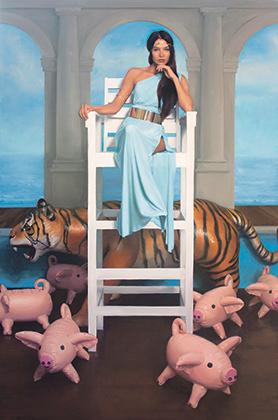 The artist, who studied in New York and Florence and has also lived in London, moved to Gozo about two-and-a-half years ago. She says this move did not influence her work, however, since then she started introducing landscape backdrops to her paintings, which could be a reflection of her move from a big city to being surrounded by nature.

“Malta and Gozo are both stunningly beautiful but the peace and quiet energy of Gozo really suits me. I spend most of my time in the studio focused on my work but now and then I just stop to daydream out of my window at my view of Ta’ Pinu with the sea on the horizon. I feel so lucky to be living here,” Ms Fuerst comments.

The only thing she cannot seem to adjust to, the artist confesses, are the fireworks throughout summer. “Even though I know when they’re coming, I still leap 10 feet in the air when they start going off.” 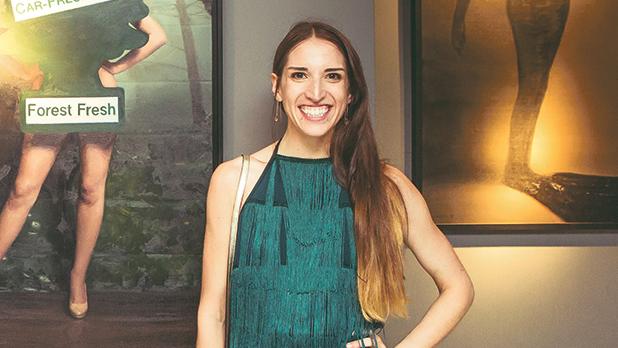