Experimental musician Renzo Spiteri tells Ramona Depares about Quintessence, the new work he premiered at FutureEverything Festival in the UK. 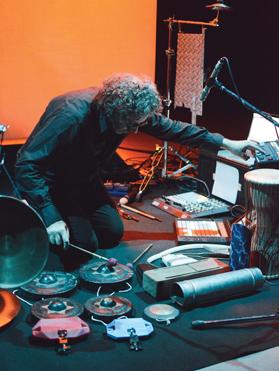 An immersive experience with truly hypnotic soundscapes that evoke myriad contrasting emotions during the space of less than an hour – this is how I would describe Renzo Spiteri’s new work Quintessence, which he recently premiered during the FutureEverything Festival in Manchester, UK, which is held in co-curation with the Royal Northern College of Music Manchester.

The 40-minute long piece sees Spiteri using the most unlikely objects and mediums to create a sequence of sounds that are as initially puzzling as they are entrancing.

The journey starts in a very subdued manner. The listener is not quite sure what is happening, what will follow next.

What the listener does know, however, is that whatever Spiteri is creating effortlessly engages all the senses. You look, you listen, you try to understand what message the artiste is trying to bring you.

Suddenly, the atmosphere changes. The music goes from understated to insistent, angry even. Female vocals are added, a mantra set against what almost sounds like a heartbeat.

The result has a primordial effect, almost hypnotic on the listener. Emotions run riot, Spiteri’s music taking us from a wary state of being, to expectancy, excitement, anger and – eventually – back to serenity. It is a piece that touches the soul directly.

How was the idea for Quintessence born?

There were a few different situations that triggered the birth of this work. The invitation to play at FutureEverything Festival came right at the moment when I was thinking of formulating ideas that were going around in my head and shape them into what would become my new solo performance.

I was searching ways and means of encapsulating two aspects of my artistic process – the need to stretch sonic possibilities in both acoustic instrumentation and electronic processing and the knowledge base acquired from endless hours playing with computer-aided creative processes.

An additional situation was the treatment of a particular theme that I wanted to put to music, a theme that I’d rather not state so as not to condition audiences and the interpretation of this solo piece.

Can you walk us through the creative process?

Working on a solo project is always a bit tricky. I search for that intimate space, the place that belongs to me and the tools around me, but I also would want to be ‘outside’ myself and be my very own extra pair of ears and eyes.

At a very embryonic stage I had also decided that so much minute detail would go into constructing the sounds triggered from my laptop, how they will behave within the performance space and also create a wide spectrum of aural qualities for the centre piece of Quintessence, which is a big, suspended metal sheet.

Then there was also the process of creating a specific orchestrated sound that combines the diverse instruments and electronics that I use.

One has to keep in mind that this performance is one, uninterrupted work that in its intensity and release goes through a lot of different levels of emotion.

What were the biggest challenges to translate it from concept to reality?

I wanted to present a journey, a work that captures the audience on a very personal level while still keeping the work abstract in nature.

There is the absence of a specific message, but there is the presence of the familiar. The familiarity of objects that are used on stage – a metal sheet; objects found around us, the beat of the heart, voices that whisper and voices that relate and so on.

I also wanted the audience to reflect. Therefore, I am demanding attention through a work that connects with each and every person in different ways.

How would you describe the moods and the music?

I wasn’t in search of creating moods when I was working on Quintessence. I wanted to channel personal thoughts and concerns into the work and create a tapestry of sounds that best transmit these elements. I knew that I wanted to be ‘in’ and ‘out’ of the piece, in a way that the audience feels free to close its eyes if they want to and experience a situation that does not necessarily call for a strong focal point on me as a performer.

The main focus is on the sound and what happens beyond the sphere of sound per se. Therefore, I would stay away from labeling moods or a specific musical quality apart from using a contemporary medium of expression.

So Quintessence is not about a message?

No, as mentioned earlier on there is no specific message in the piece. The work was not conceived or developed with that intent. I see this work as a moment that temporarily takes the audience into another world, detached from our own self perhaps. I feel better to think in terms of a sound tapestry that surrounds and transports the self, rather than messages.

Very stimulating. Being part of a festival is always a nice thing – one gets the chance to see other performances, attend talks, meet other artists and see or listen to their work and exchange ideas.

How did the people react to this new piece?

It’s so fascinating to listen to how different characters experience Quintessence. Some people have come back to me with very personal insights, all pretty much different from each other. And this is great. This is what this work is all about, really.

I’ve been told that once I’m done with my performance and headed back to my room, a good percentage of the audience takes its time to stand up and exit the hall.

I think this is a very respectful gesture towards the work. May I add that, apparently, a number of people seem to feel the need to go and touch the metal sheet.

I guess that’s because it takes such a life of its own that goes way beyond what one would normally expect from a simple thin metal sheet. I’ve managed to make it upstage me and I’m perfectly okay with that.