In the late 19th-century, a musical society called L’Unione was founded in Luqa. No celebrations can be held this year to pay tribute to those who worked hard for the band’s success since then. But today, as we celebrate the feast of St Andrew the Apostle with a Solemn Mass and procession, our thoughts go back in time to revive some of the most significant moments in L’Unione Philharmonic’s history.

L’Unione was founded in 1880 by maestro Vincenzo Camilleri and his four sons, who used to teach music to village boys at their summer re­si­dence in Strada Carmine during the holidays.

In 1883, the band was ready to take part for the first time in the feast of St Andrew, then held annually on November 30. But the local authorities withheld permission, possibly due to rivalry between members of the club, some of whom ended up forming another band club, named after the patron saint. Thus, the first documented official public appearance of the L’Unione band in Luqa was on the feast of the Immaculate Conception on December 8 of the same year.

From 1884 onwards, the L’Unione band started taking part in the festivities honouring St Andrew and a year later, it also took part solely in the village’s secondary feast in honour of the Blessed Virgin of Consolation, which enjoyed much devotion in those days.

In 1886, L’Unione Philharmonic Society took part in the inauguration ceremony of the Cavalieri di Malta Band in Sliema. This was founded by Ferdinando, Gavino and Emmanuele Camilleri, sons of the same Vincenzo Camilleri.

Later, under the direction of Prof. Gaetano Grech, the two L’Unione bands of Luqa and Vittoriosa played together on the 800th anniversary of the foundation of St Lawrence parish church of Vittoriosa in 1890. A year later, L’Unione band also took part in the special festivities held in Valletta to commemorate the diamond jubilee of Queen and Empress Victoria.

Our future will always be focused on music

The final years of the 19th century saw L’Unione Philharmonic at the height of its popularity, with many musical services and concerts held in numerous towns and villages, including Valletta, Vittoriosa, Senglea, Floriana, Żurrieq, Kirkop, Żabbar, Birżebbuġa and Sliema.

Worth mentioning are two  concerts held in Valletta in July 1895 as part of the festivities held on the elevation of the Shrine of Our Lady of Mount Carmel in Valletta to a basilica minoris. At the time, L’Unione was under the presidency of Vincenzo Cremona, a well-known merchant from Valletta who also happens to be the great-grandfather of Archbishop Emeritus Paul Cremona. 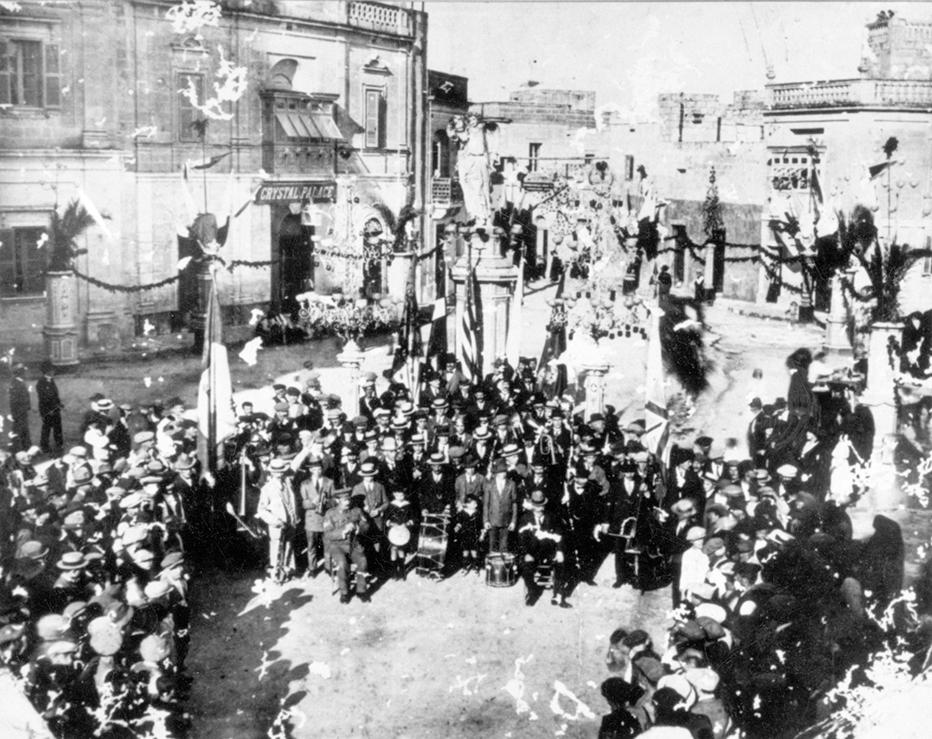 In the 20th century, L’Unione sustained its ongoing musical appearances under the direction of renowned maestros, such as Orlando Crescimanno, Emanuele Spiteri, Giuseppe Casa­pinta and Salvatore Mallia. In 1923, a new band uniform was inaugurated, and L’Unione Philharmonic took part in a commemorative concert in Piazza Chiesa, Luqa.

After the devastation of World War II, the first bandstand was inaugurated in 1953 by then prime minister George Borg Olivier. On that day, L’Unione took part in a commemorative concert under the direction of maestro Joseph Abela Scolaro. A second artistic bandstand was inaugurated by Governor-General Sir Maurice Dorman and Auxiliary Bishop Mgr Emmanuele Galea in 1969.

The last quarter of the 20th century was dominated by the musical direction of Charles Zammit, who continued in the footsteps of his predecessors to keep music alive. In fact, since 1983, L’Unione band has been holding an annual symphonic concert in leading local theatres and churches.

A truly memorable experience was when L’Unione went to Italy, where it had the opportunity to take part in the festivity of St Andrew in Amalfi, and subsequently, it had the privilege of meeting Pope John Paul II at the Vatican in 1997.

Our future, although somewhat blurred due to the current crisis, will be always focused on music ­‒ its appreciation, execution and teaching. In this way, L’Unione will strive to continue educating the younger Maltese generation to appreciate the valuable voluntary work that local band clubs do in order to promote our culture, patrimony and extraordinary heritage.