The history of the Maltese islands is a rich narrative of a privileged relationship with its surrounding sea – a timeline of colonial influences largely seduced by the islands’ geo-political location, natural harbours and commanding trading routes across the Mediterranean.

The Order of the Knights of St John had a long and profound relationship with the Mediterranean, becoming the finest navigators and fighting seamen of their time.  In 1530, Malta became the seat of the Order and the Knights soon committed to make the island a stronghold against the impending threat of an attack by the Ottoman. After the battle of the Great Siege in 1565, Malta continued to prosper under the Knights, also due to the expansion in maritime trade.

By the early 18th century, around 3,000 men were employed with the merchant fleet and another 700 with the Maltese Corso (the maritime fleet), which also helped support the financing of the Order. This wave of growth in the maritime industry led Grand Master Ramon Perellos y Roccaful, in 1697, to orchestrate the setting up of a Consolato del Mare, a sort of commercial court – the first of its kind in Malta – modelled on the already existing structures found in Barcelona, Valencia and Messina.

Its tribunal was composed of savvy merchants and mariners who would use their experience to help facilitate trade dealings and render the process more efficient. The Consolato del Mare established a legal framework, and intervened where necessary to resolve disputes and litigations. Its influence would extend beyond Maltese shipping to also fulfil the broader need for an adjudicating tribunal between European states, that was neutral, unbiased and balanced.

A rich and enticing insight into Malta’s past can be found in the manuscripts of the Consolato del Mare at the National Archives of Malta at the Banca Giuratale in Mdina. The documents date back to the early days of the Consolato in 1697, until its abolition by the British in 1814, having then been replaced with the Corte di Commercio.

The manuscripts contain information on maritime law, business practices such as the chartering of vessels, cases involving insurance, freight and trade networks, shipping destinations, navigational techniques and the working conditions of seamen and their wages.

The reader not only gets a broader understanding of the development of international commercial and contractual law, but is also exposed to the personal and social relationships of those days.

It is certainly gratifying to know that these recordings have survived through the centuries. But this did not just happen by chance. These documents have been in dire need of proper cleaning, preservation and conservation.

Following an appeal by historian Joan Abela, MSV Life, Malta’s largest life insurer, together with several other individuals and firms, contributed towards what turned out to be a successful fund-raising campaign to initiate Phase I of a preservation project. This was done in collaboration with the Malta Chamber of Commerce, Enterprise and Industry. 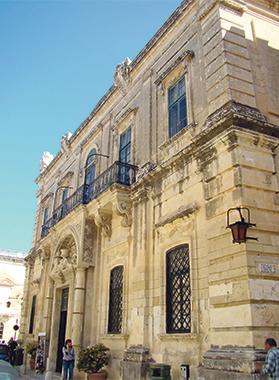 “We believe that the companies that perform best over time are those that build a social purpose into their operations that is as important as their economic purpose.

Ever since our establishment in 1994, we have sought to inculcate responsible entrepreneurship into our fabric by engaging in making a contribution to the benefit of society and the community in which we operate,” said MSV Life CEO David G. Curmi. “Acknowledging and respecting the country’s origins and heritage enhances the quality of life and environment we live in, which are important components of any society’s wellbeing.”

A collection of 473 items made up of 22 bundles and 253 bound volumes currently occupy an impressive 50 metres of open shelving at the Banco Giuratale in Mdina. Irene Sestili, a graduate in History and Archival studies from the University of Roma La Sapienza and the State Archive of Rome respectively, was entrusted with the conservation work under the supervision of the conservators of the national archives.

After technical surveys carried out on the collection by professional archivists and conservators of the national archives, it was proposed that the project be divided into three phases: Phase I, which was launched on  June 1, 2015, was completed earlier this year and included the removal of supporting wrappers and poor quality boards from the bindles and volumes, the sorting of the documents in chronological sequence, paginating and a dry cleaning of the collection. A detailed survey was then carried out to establish the type and degree of damage in the collection.

Phase II of the project will consist of an analysis of the condition survey. This will help the conservators to prepare a work plan for the entire collection. In the third and final stage of the project there will be one-to-one interventions on the documents to ensure that the collection is conserved to its original state.

While the manuscripts of the Consolato del Mare are a treasure trove for those of us having a direct interest in the maritime industry and its evolution through history, scholars and researchers alike would also come across insightful information about the social relations of the time, particularly that of the lives of seafarers.

The documents also offer an interesting read about Malta’s commercial trade relations at the time with other countries of the Mediterranean and beyond.