The islands of Malta witnessed an increase in migration to north Africa in the second half of the 19th century. The local economy lacked resources to feed the ever-growing population, making the agrarian sector the main food provider. However, even this sector fell short of expectations because it depended on the weather, coupled with diseases that befell animal husbandry from time to time.

Government jobs were scarce and many people were unemployed, and thus being reduced to a life of destitution and illnesses. Hence, people started to look for employment in the Mediterranean coastal countries, especially in the French-occupied countries of Tunisia and Algeria.

Xagħra-born Giuseppe Rapa emigrated to Algeria when he was still in a teenager in search of work and for a better future life. He succeeded in getting a job in Bône [now known as Annaba], a port city in the northeastern corner of Algeria, close to the border with Tunisia, and used to return to Gozo from time to time.

It was during one of these trips that he encountered his future wife, Carmela Spiteri – a lace worker – with whom he tied the knot on November 20, 1886, at Xagħra parish church. Giuseppe emigrated again alone to Algeria for work and sent money to support his new family. In the first five years of marriage, they had two children Antonio on July 6, 1889, and Lorenzo on Christmas Day of 130 years ago in 1891.

On finding a secure job while at the same time facing the emotional difficulty of being separated from his family for long stretches of time, Giuseppe decided to take his whole family with him and settle in Algeria for good, notwithstanding the uneasiness expressed by his young wife. The younger child, Lorenzo, later known as Laurent, was just two years old when he left Gozo, never to return.

On arrival in Algeria, an administrative twist left an imprint on the surname of the family forever. On asking Giuseppe for his surname, the passport officer at Bône port put it down as ‘Ropa’ on hearing the former uttering it with the Gozitan dialect. Eventually, the family settled in Hippone at Allelick (Annaba), a village near Bône, when the father rented stretches of land to grow fruit and vegetables to sell in the market.

The Ropa family had six children, namely Antonio, Lorenzo, Marì, Salvatore (later on to become Dominican friar Fr Pio Rapa), Agostino and Speranza. The Ropa family suffered the loss of their beloved young mother at the age of 42 in 1909, leaving the last child as a toddler, just two years old. She was buried in Bône. By the end of World War I, all the children, including the father, except for Salvatore, emigrated and settled in France. In his old age, the father returned to his native village of Xagħra for good.

The childhood and upbringing of Laurent Ropa is best portrayed in his novel La Chant de la Noria (‘The Song of the Watermill’) published in 1932. The novel is inspired by his childhood surroundings and the difficulties encountered by his parents. Being the second child of the family, he and his elder brother, Antonio, gave a helping hand to the well-being of their family.

At the age of six, he started attending school, which was six kilometres away from the family abode. He travelled on foot to and from school every day. At the early age of eight, Laurent and his brother Antonio engaged themselves with a bricks factory or as dockers to unload bricks shipped from Marseille at the port of Bône. Laurent also worked as a street vendor selling fruit and vegetables for some time. These jobs were done during school days. In his own words: “Soon, with my brother (Antonio) we took advantage of the car that transported vegetables to the marketplace: waking up at three o’clock every morning.... On Thursdays and during the summer holidays, I was the keeper of the noria – it was about preventing the horse or the mule on duty from stopping – and I used to lead the oxen to the fields.”

At the age of 12, Laurent started to show an interest in studies of books. “I was already doing verses. My teacher used to insist that I return in the classroom.” Notwithstanding the poverty which befell his family at this early stage in life, Laurent sat for the competitive exam for the entrance at the Normal School of Constantine, which he passed with flying colours.

On March 15, 1913, the 22-year-old Laurent, still a British subject, was neutralised as French. A year later, at the dawn of World War I, being endowed with a schooling background, he was enlisted as a sub-lieutenant with the Zouaves regiments and sent to the battlefront in France. He twice sustained injuries and ended the war as a lieutenant in Tunisia where he was discharged from military service. He was awarded the Military Medal and the Croix de Guerre.

While recovering from his first injury at a hospital in Sarthe, France, he met his future wife, Marguerite Gervaiseau, a teacher by profession, who worked as a nurse at the time. They were married on February 7, 1917, at the church of his wife’s native village of Piacé, in the department of Sarthe, northwestern France. They established their matrimonial home in that small village. Laurent was a teacher in Piacé and was promoted to headteacher until his retirement after 21 years in the education service. They had two children, Denis and Edith.

Laurent showed a keen inclination towards literature from an early age. Culture and the French language were his main staple: “Writing, is to meditate, to pray, to sing.” He jotted down his first poems in French at the age of 14. His early literature was greatly influenced by the writings of the French poet and writer Victor Hugo. 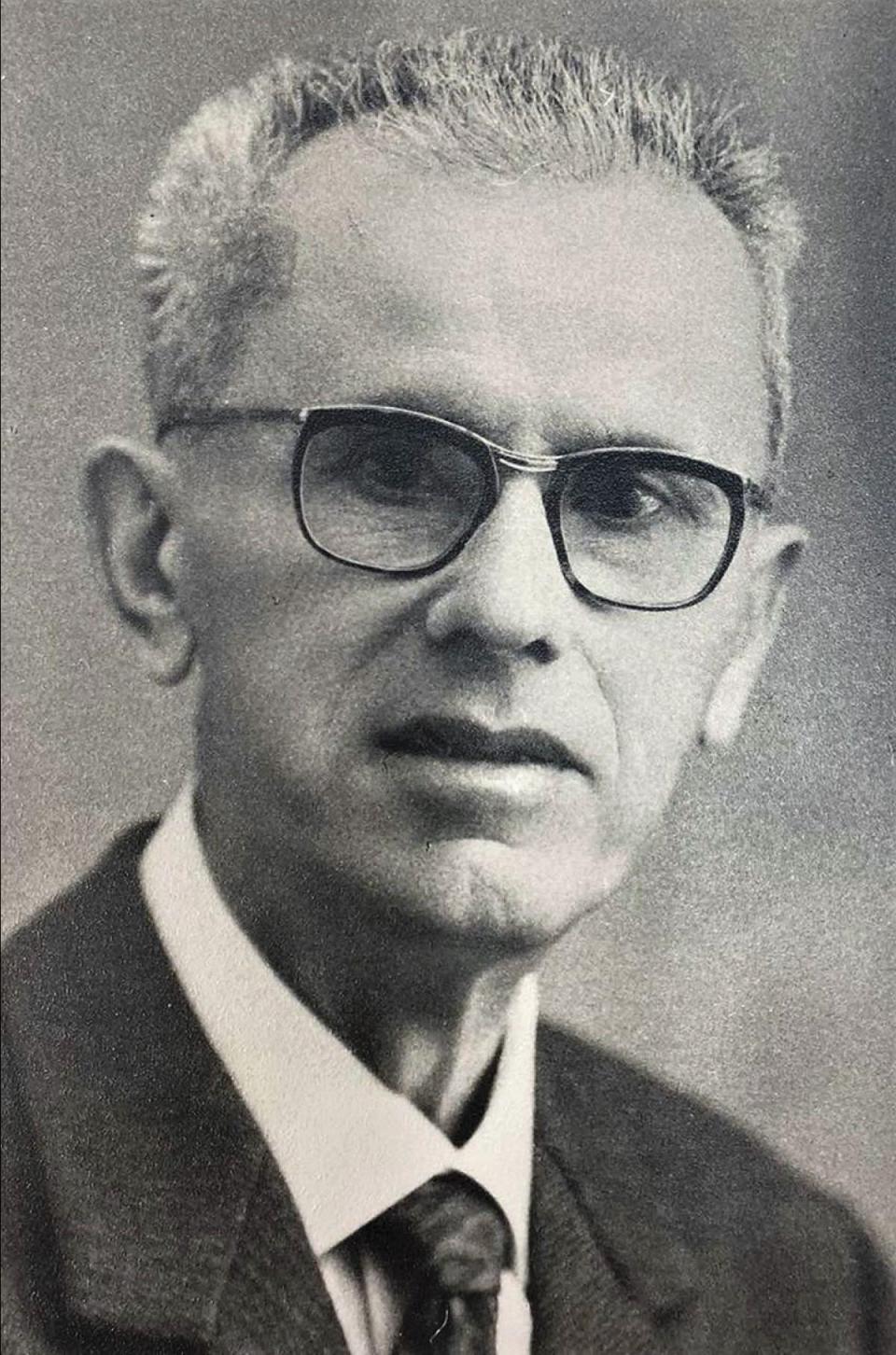 In 1932, Laurent published his first novel The Song of the Noria, followed by Kâline and Bou-Ras in 1936 and 1960 respectively. The first novel was very well received and reviewed with acclamation. It described the often miserable life of Maltese emigrants in Algeria. This publication was later translated into Maltese by Joseph Aquilina and published in 1971. The novel is considered by the French Algerian novelist Robert Randau as “one of the most beautiful books written on Algeria”. In the other two novels, Laurent showed pride of his family origins and patriotism.

Laurent spread his literary prowess to the promotion of Maltese culture and identity in Algeria and in France. Throughout his activities, he maintained relationships with members of Maltese emigrants around the world through the cultivation and development of the Maltese language. Sometimes, he was surprised and displeased at the fact that Maltese living in Algeria felt proud of becoming French citizens and were hastening to get rid of their national language. This was clearly expressed in his regular contributions to the newspaper Mélita published in Susa (Sousse), a city in Tunisia, of which he was also editor for a period of time.

Laurent’s literary achievements came out clearly in his writing of poems. He published them in three volumes in 1950, 1953 and 1968 respectively. His first poems were published in 1932 in the book Anthologie des Poetes Neo-Classiques. 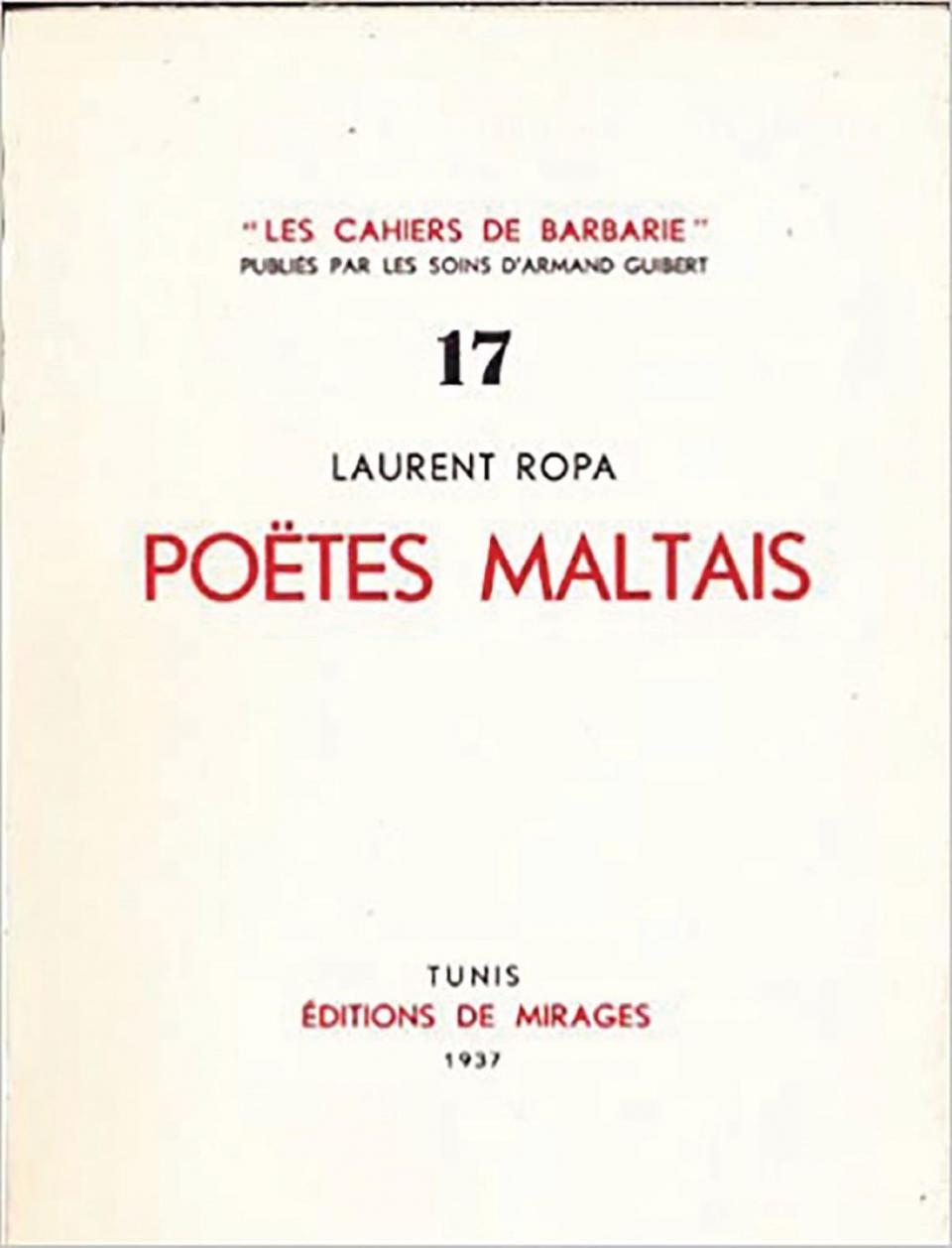 Ropa’s 1937 publication about Maltese poets and their poems in French.

Laurent would write endlessly about all topics of Maltese interest in French language. He even translated poems by Fr Karm Psaila. Hence, Maltese literary works attracted the attention of foreign academics for the first time. In 1937, he published poems by many of the Maltese poets in Poetes Maltais. It was through Ropa’s efforts that Maltese literature started to gain deserved recognition within European literary circles. In fact, referring to Maltese literature, the French journal Le Petit Matin of April 10, 1937, published that the literature of the world was enriched by a new soul and language.

Laurent excelled also in writing letters to a number of Maltese literary giants including Fr Psaila, Joseph Aquilina and Fr Peter Paul Saydon. He succeeded in meeting the latter two during the summer of 1938 at Chartres train station in Paris. Ropa developed a strong bond with Fr Psaila. He even mentioned him as Malta’s national poet for the first time in his contribution Malta et sa litterature in November 1935 in the issue of La Grande Revue. Thereafter, Psaila’s title as national poet started to gain ground among Maltese local academics and people in general at the time. 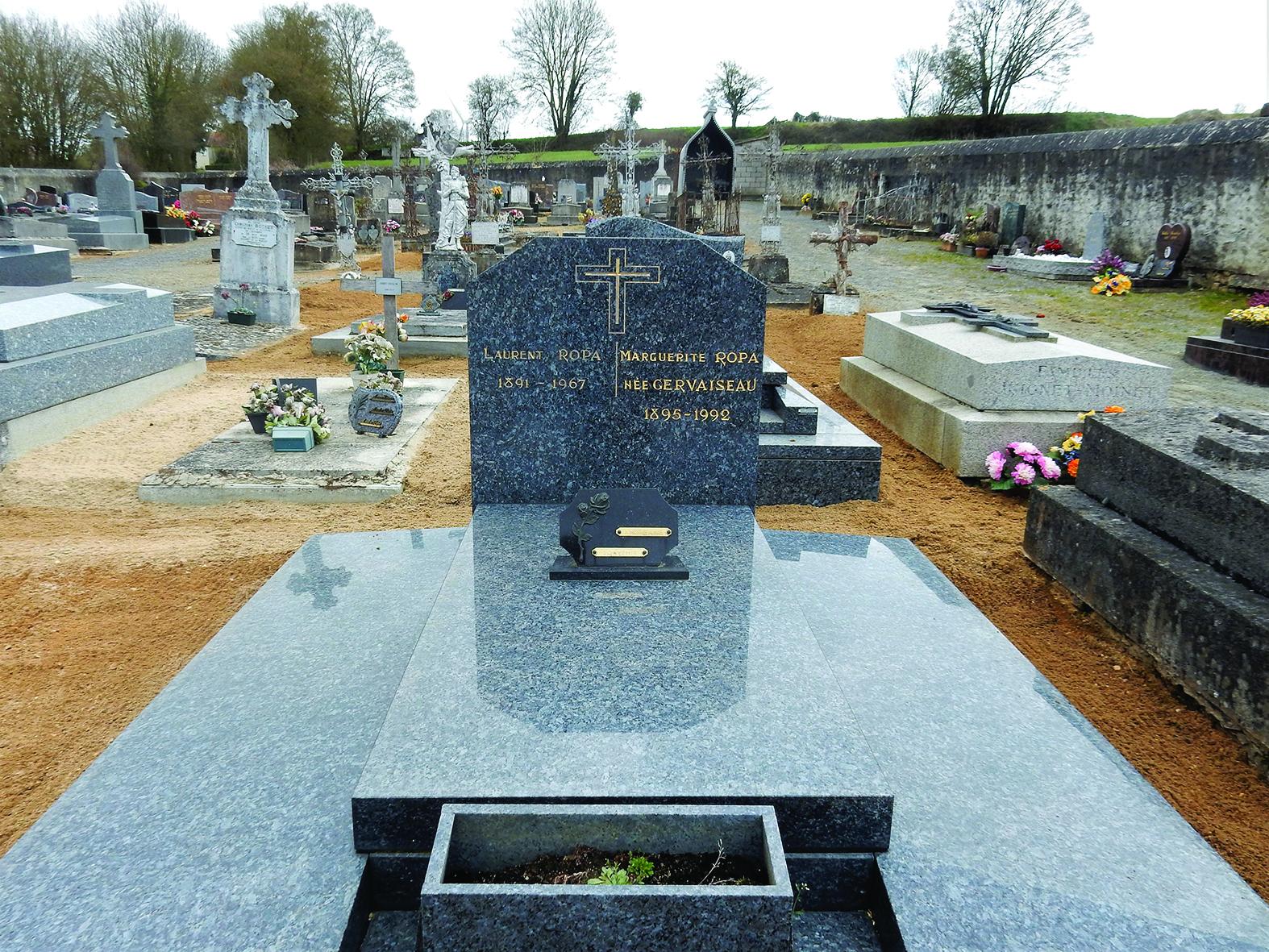 The tombstone of Laurent and Marguerite Ropa in Piacé, France. 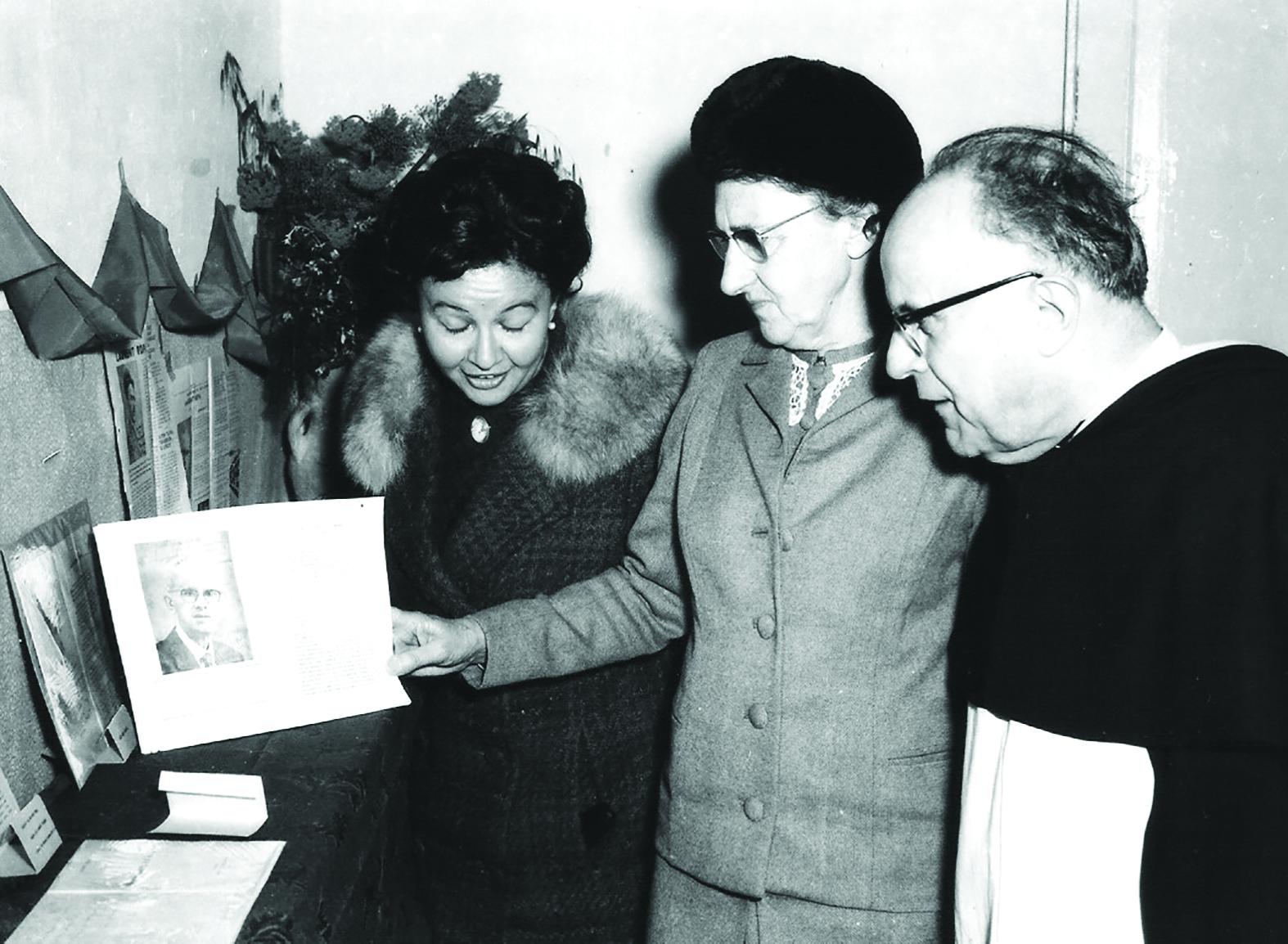 Laurent’s widow Marguerite Ropa (centre) and his brother Fr Pio Rapa at the exhibition about Laurent Ropa held in Xagħra in 1970.

Laurent died on March 29, 1967, in Piacé at the age of 76. His surviving widow paid a visit to the Maltese islands in 1970. She unveiled a memorial wall marble plaque at Laurent’s native village at Xagħra on April 29, 1970, which was blessed by Fr Pio Rapa, Laurent’s younger brother. The ceremony was attended by numerous people of distinction and members of the public. It was organised by the Gozo Civic Council and coordinated by Joe Attard Tabone. 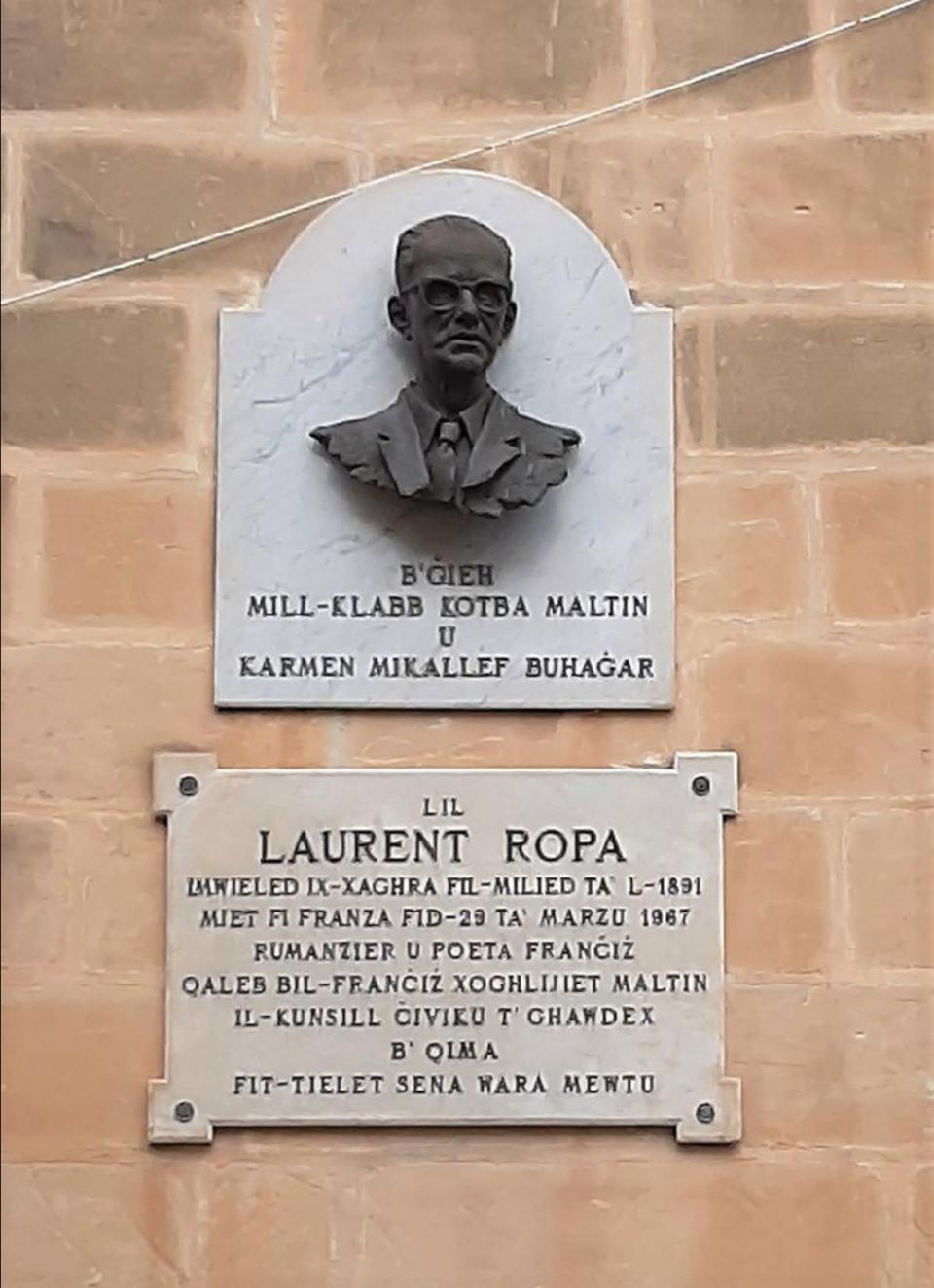 The commemorative marble plaque at Xagħra.

In April 1975, a free-standing memorial in homage to Laurent Ropa was set up in the public gardens of Villa Rundle on the initiative of Paul Mizzi of the Klabb Kotba Maltin in Gozo, with the collaboration of the departments of Maltese and French of the then Malta Royal University. His wife Marguerite passed away on January 5, 1992, at Tours in France at the age of 97. They are still survived by grandchildren on their daughter’s side, the son having remained a bachelor.