Dramatic arrests, political intrigue, potential pardons… speculation. Claudia Calleja looks back at one of the most turbulent weeks in Malta’s political and criminal history

Malta was shocked to the core when a bomb was detonated under journalist Daphne Caruana Galizia’s car in October 16, 2017.

After two years of protests and pressure on the authorities to arrest the people behind the murder, a pardon was on the table for a suspected middleman and another was requested by a high-profile businessman.

Both suspects were under arrest as protests grew calling on the Prime Minister to resign, even if he pledged to get to the bottom of it.

It all started on Tuesday morning when readers woke up to Times of Malta’s report that a presidential pardon was on offer for a key suspect who claimed to know who masterminded Ms Caruana Galizia’s assassination.

Later that morning, Prime Minister Joseph Muscat confirmed that the suspected “middleman” – later named as Melvin Theuma – had been arrested by police and Europol officials on November 14 during a raid that targeted an alleged money laundering ring. The middleman is believed to have linked the person suspected of commissioning the murder to the three men accused of carrying out the murder, as well as those who helped procure the explosive device. So far, three men – brothers Alfred and George Degiorgio and Vince Muscat – have been charged with triggering the car bomb which killed the 53-year-old journalist.

Dr Muscat told journalists he had signed a letter ensuring he would recommend a presidential pardon once the middleman’s evidence and testimony was given and corroborated in court. The pardon would be given for his involvement in the murder plot as well as for past crimes on condition that he cooperate with the authorities.

On Saturday, Times of Malta was informed the Prime Minister was expected to agree to the pardon.

Arrest of a tycoon

The second shockwave came the following day, on Wednesday early morning, when business tycoon Yorgen Fenech, owner of secret company 17 Black, was arrested by the Armed Forces of Malta after he was intercepted at sea aboard luxury family yacht Gio. The yacht had left Portomaso marina in St Julian’s around 5.30am and was believed to have been heading for Italy.

Later that morning, the Prime Minister said Mr Fenech was a “person of interest” in the investigation into the murder of Ms Caruana Galizia. Two days later, Dr Muscat said the arrest was not a result of details supplied by the middleman.

Later on Wednesday, it emerged that Mr Fenech had resigned from his position at the helm of the Tumas Group according to documents filed on Tuesday, a day before his arrest. He also stepped down as director of Electrogas, the company which runs the new Delimara power station. Mr Fenech also resigned from Tumas Gaming Ltd and Tumas Investments Ltd. It emerged that Mr Fenech had also put his personal 26-metre yacht, Gio 2, for sale for €4 million after buying it for €5.5 million last year.

The Caruana Galizia family described the arrest as “an overdue and important development in the investigation” into the assassination. The family said it expected the authorities to continue investigating the links that Ms Caruana Galizia had uncovered between Mr Fenech and the Prime Minister’s chief of staff Keith Schembri and Tourism Minister Konrad Mizzi. 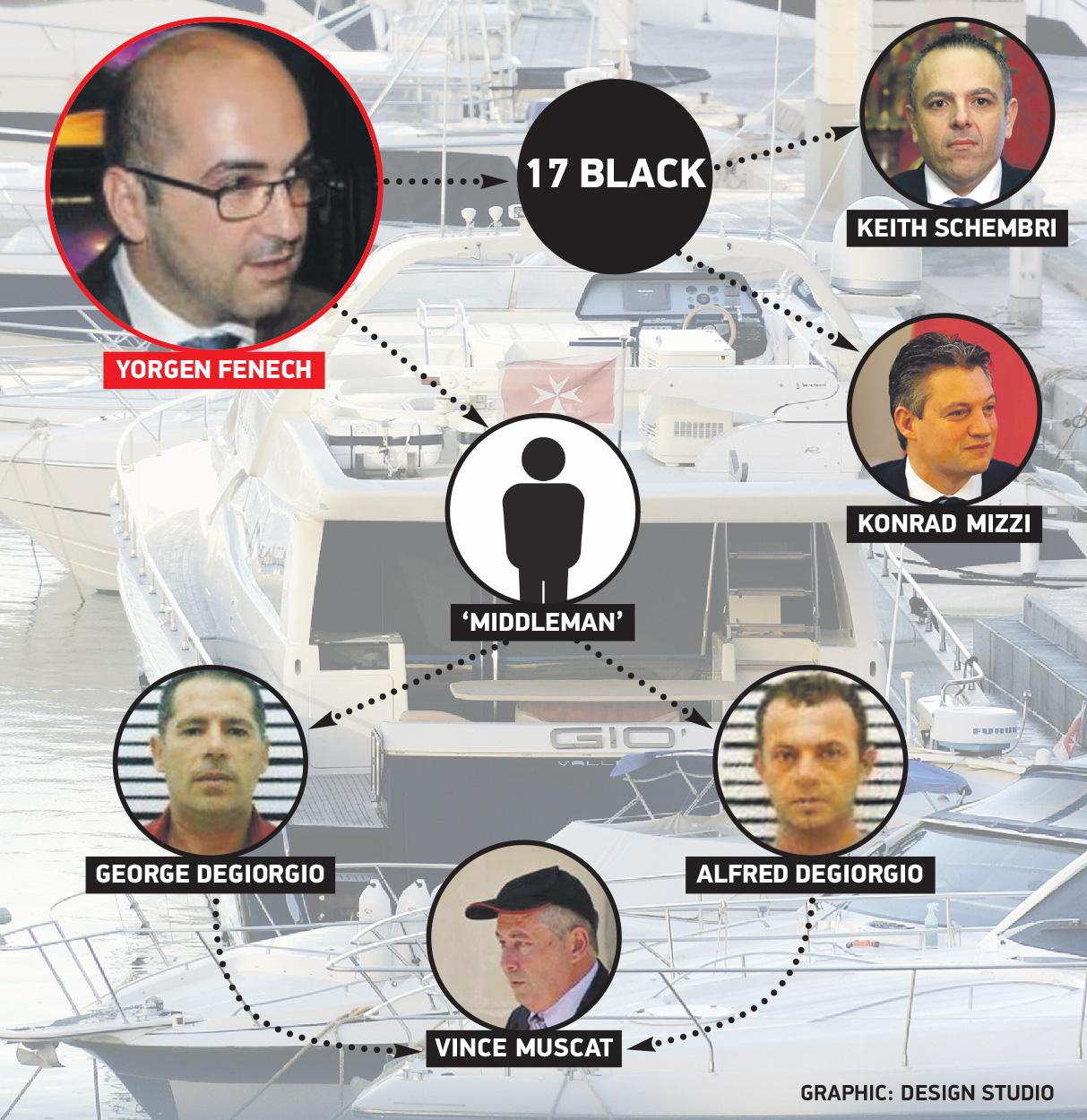 Yorgen Fenech, the owner of 17 Black, was arrested on Wednesday as a ‘person of interest’ in Daphne Caruana Galizia’s murder investigation. The company was named in an email under a plan to funnel millions to the Panama companies of Keith Schembri and Konrad Mizzi. Fenech is a suspected mastermind in the murder, with the alleged ‘middleman’ Melvin Theuma also under arrest. He is suspected of arranging for the Degiorgios and Vince Muscat to put a bomb under the journalist’s car. The trio are pleading not guilty in a trial that has just got underway.

The arrest of Mr Fenech, the owner of 17 Black, piled pressure on the Prime Minister to assume political responsibility. 17 Black was identified in a leaked e-mail as one of two sources of income for Panama companies Hearnville and Tillgate, which were set up by OPM consultants Nexia BT for Mr Mizzi and Mr Schembri.

On Wednesday evening, and again on Friday evening, anti-corruption protesters took to the streets in Valletta demanding the Prime Minister’s resignation in light of the link between 17 Black and two senior government officials. The Opposition walked out of Parliament on Wednesday evening in protest over Dr Muscat’s refusal to sack Mr Schembri and Mr Mizzi.

Denying he was protecting anyone, Dr Muscat said he would not step down insisting the “country needs leadership”.

On Thursday night, 48 hours after his arrest, Mr Fenech was granted police bail as investigators needed more time to question him before pressing charges – only to be rearrested for further questioning on Friday morning.

In another twist, Mr Theuma admitted himself to Mater Dei Hospital on Friday morning – amid high security – complaining of “medical issues”. He was released later that day.

Then, in another day of high drama on Saturday, it was Mr Fenech’s turn to be hospitalised after he had applied for his own presidential pardon to give information on the murder.

And as if that wasn’t enough for one week, Economy Minister Chris Cardona was called in for questioning by the police, although he is not being treated as a suspect.

October 16, 2017 – Journalist Daphne Caruana Galizia is killed by a powerful car bomb that explodes close to her home in Bidnija.

December 4, 2017 – Investigators arrest 10 suspects in connection with the journalist’s murder. Some of the suspects, including brothers Alfred Degiorgio (known as Il-Fulu) and George Degiorgio (Iċ-Ċiniz) as well as Vince Muscat, (known as il-Koħħu), were known to the police.

December 5, 2017 – The Degiorgio brothers and Mr Muscat are arraigned before a magistrate late in the evening. The three men plead not guilty to the car bomb murder and are remanded in custody. Their assets are frozen by the courts.

June 26, 2019 – A report by the Council of Europe on the state of the rule of law in Malta flags serious concerns with the investigation into the murder. 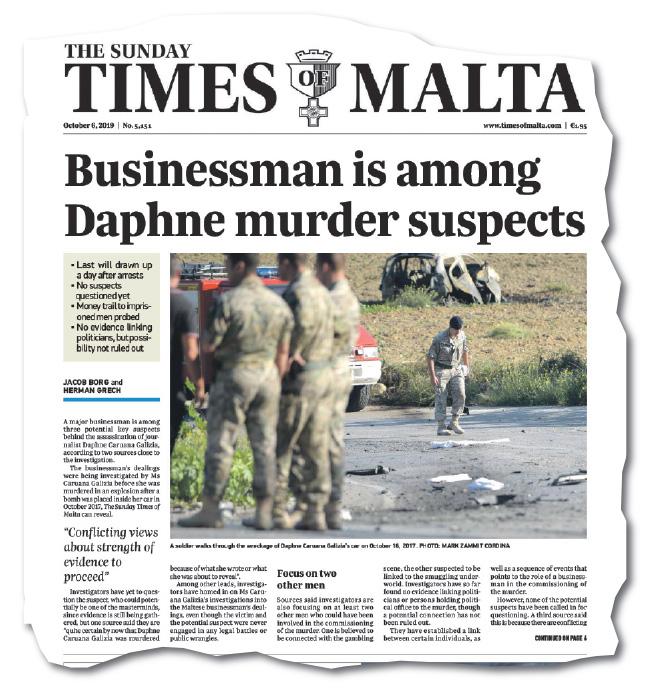 The October 6 front page which precipitated the arrests.

October 6, 2019 – The Sunday Times of Malta reveals that a prominent businessman is among three potential key suspects behind the assassination. It does not mention names, but hints towards a number of individuals watched by the police.

October 13, 2019 – Vince Muscat tries to negotiate a reduced sentence in exchange for testimony.

October 27, 2019 – His lawyer drops his client just three months after taking over as his legal counsel in the case.

November 14, 2019 - The suspected ‘middleman’ is arrested by police during a raid that targeted an alleged money laundering ring he forms part of.

November 19, 2019 – The Prime Minister confirms he will grant a presidential pardon to the suspected ‘middleman’ as long as he collaborates, and the information provided is sufficient to prosecute the mastermind.

November 20, 2019 - 17 Black owner Yorgen Fenech is arrested at dawn after he is intercepted at sea aboard his yacht by Armed Forces of Malta personnel.