Speaking at a press conference on Tuesday, he said businesses had made many sacrifices in recent months but the government was determined not to let anyone stand alone.

The main points of the new assistance are:

Flanked by Enterprise Minister Miriam Dalli, Abela said the government is giving an additional €20 million in aid to businesses, and tax credits of €78 million, which could have been lost, are having their term extended by three years. 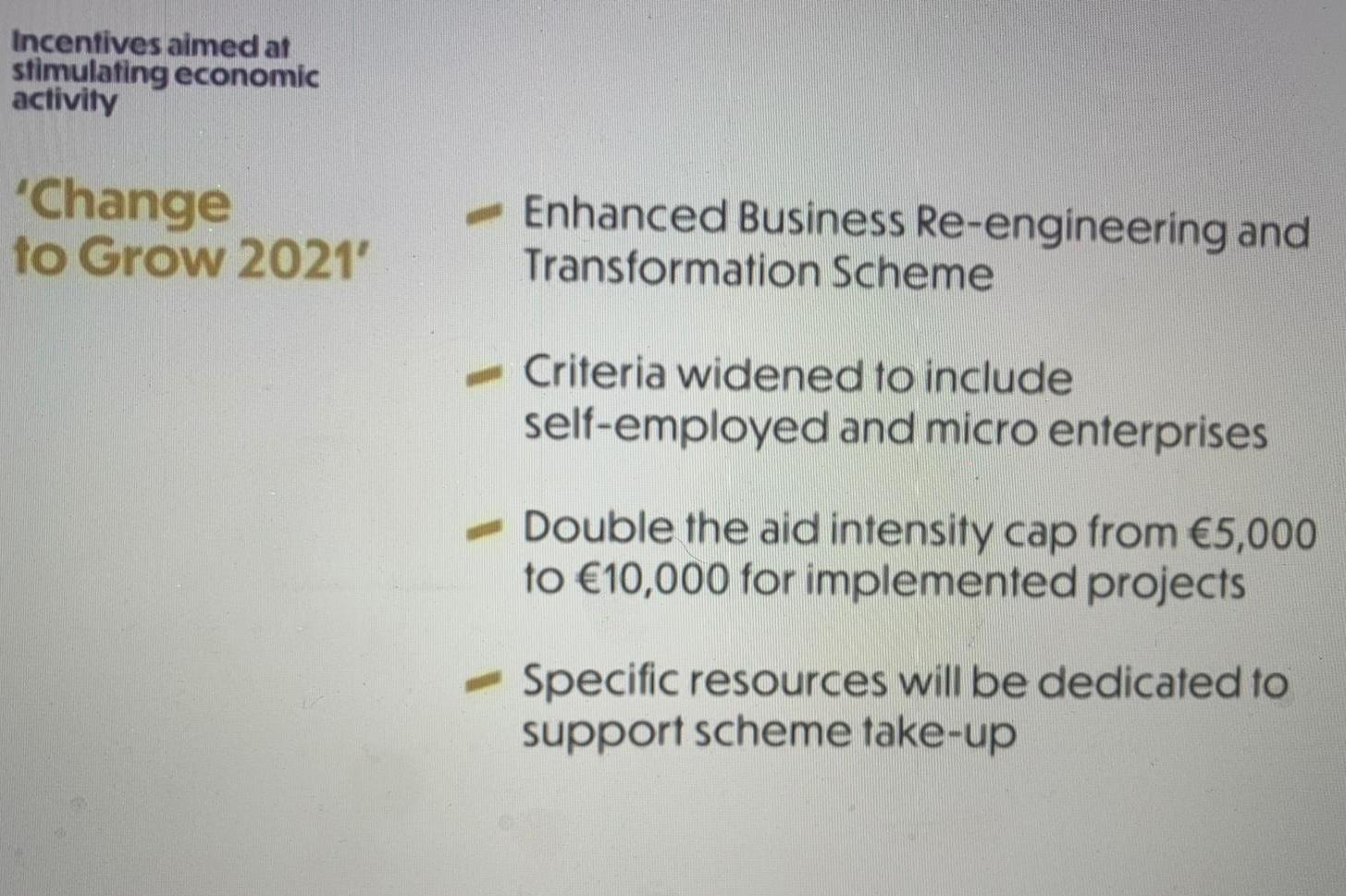 He pointed out that by the end of April, the government will have issued €455 million in wage supplements and other assistance, including rent subsidies, to help tide over the pandemic.

Some 100,000 employees have benefited from the wage subsidy system to date.

The Nationalist Party welcomed the measures but argued that they were short-term patches to long-term problems. 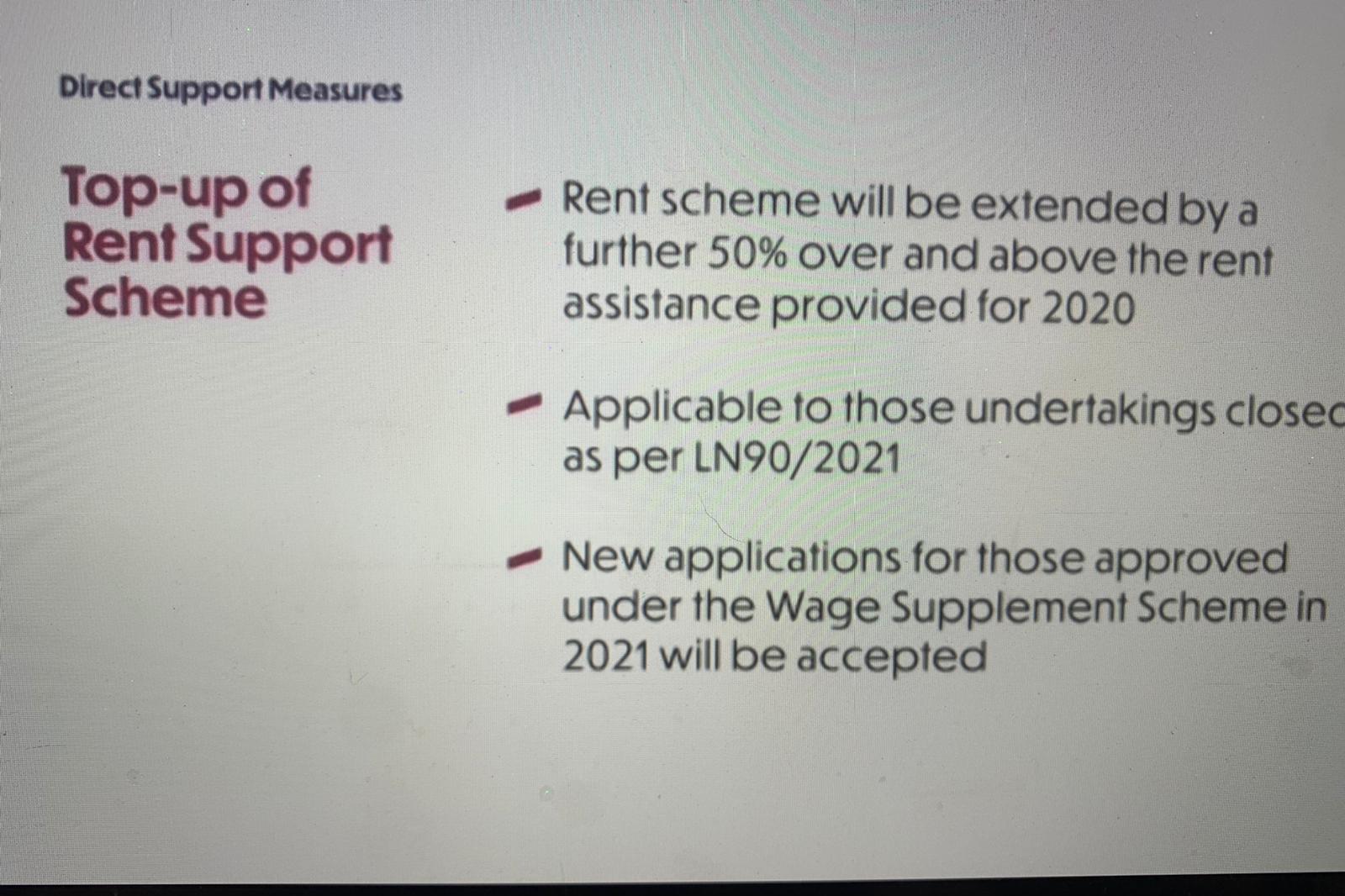 Enterprise Minister Miriam Dalli said the new assistance measures were geared to inject liquidity and stimulate activity in the economy. The assistance will include subsidies on rent and electricity bills.

Businesses that remain closed after May 10 will be given a one-time grant of €1,000. 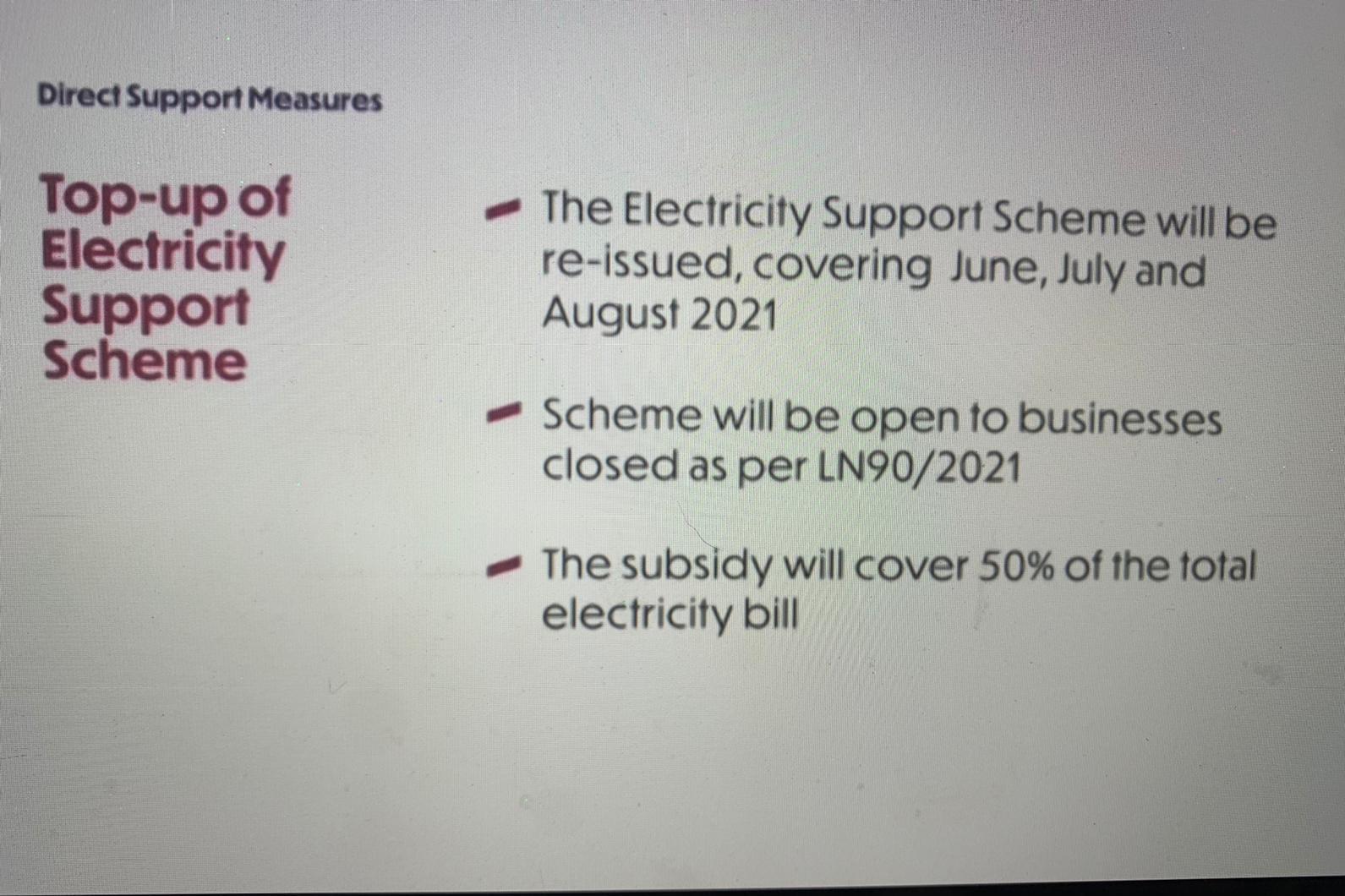 Schemes will also be offered for 'smart and sustainable investment' while entrepreneurs who suffered psychologically during the pandemic will also find help, Dalli said. 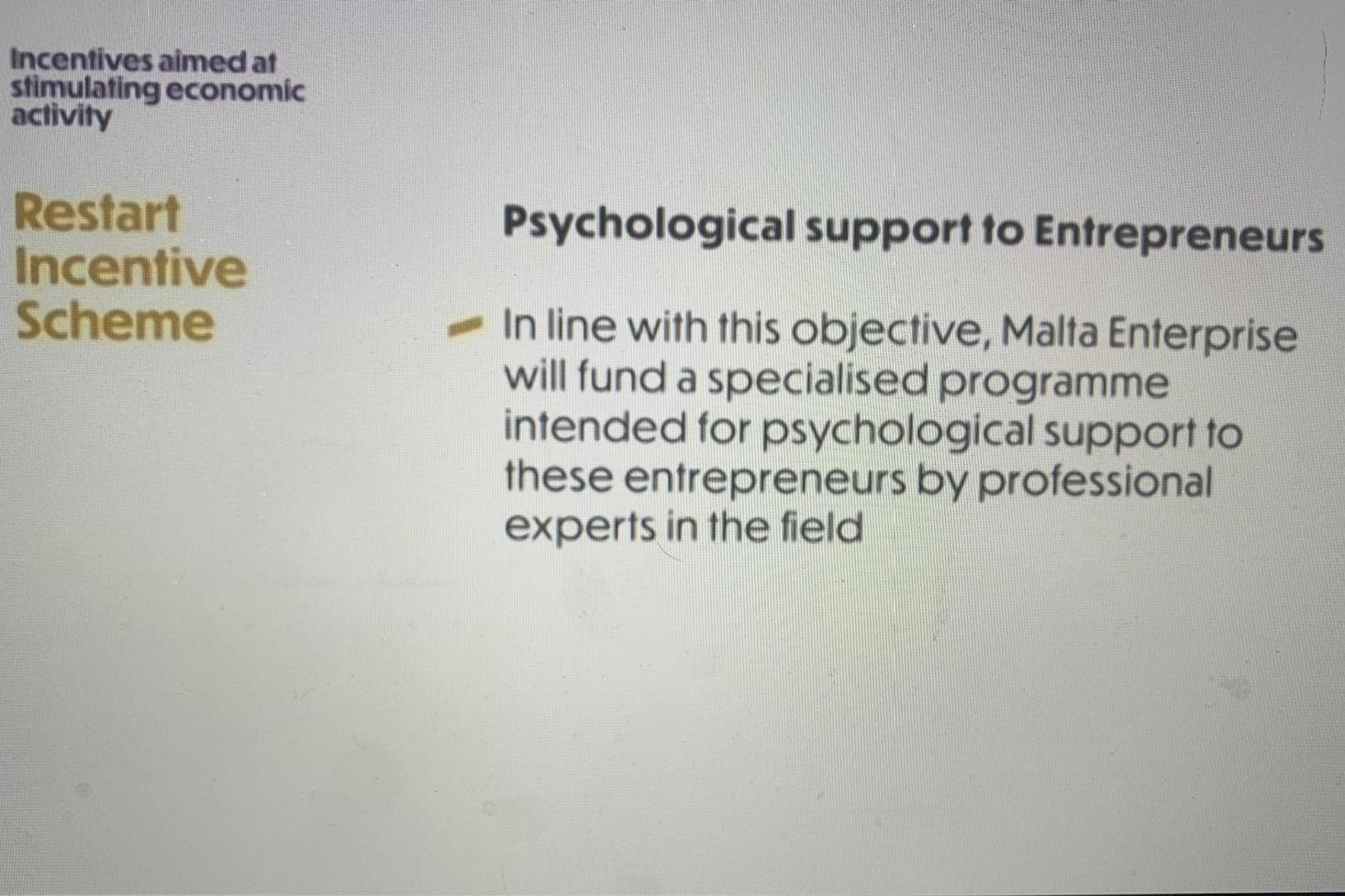 Tax credit certificates will be extended by three years to help in business liquidity. 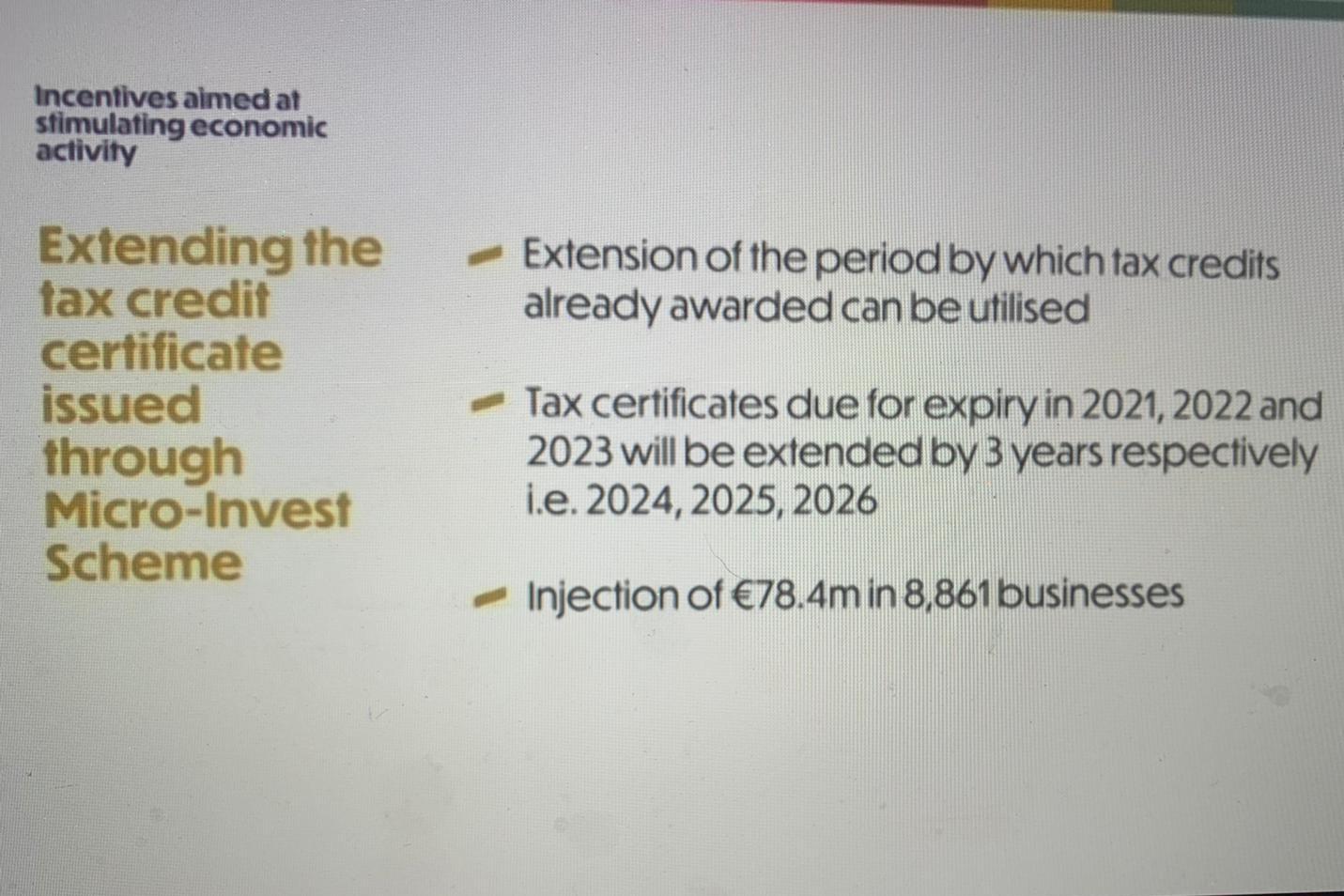 'Curfew is not perpetual' - Abela

Replying to questions, the prime minister said that had the government not intervened in the way it did over the past months, tens of thousands of people would have become unemployed. That ugly forecast never materialised, he said.

The measures being announced were sustainable, he added, but he was appealing to all those involved in a coordinated assault on the country to stifle investment, to stop.

He also reiterated that the government is aiming for a robust economic recovery and will not be imposing new taxes.

Asked why restaurants would only be allowed to reopen up to 5pm as from May 10, the prime minister said the decision was based on scientific advice. He appreciated the sacrifices that are being made, but said his appeal is not to rush but to be cautious.

"The curfew isn’t perpetual and will eventually be reviewed," he said.

Questioned on forecasts for the summer, the prime minister said tourist bookings to date were encouraging and he looked forward to a good summer.

In a statement, the Chamber for SMEs (former GRTU) welcomed the new financial assistance.

"The schemes announced today are the result of intense consultations and numerous meetings with different sectors to assess the COVID-19 impact and their specific needs," the chamber said.

It thanked Miriam Dalli for her and her ministry’s positive attitude to listen with genuine willingness to help businesses weather the crisis.

"The continuous support which government is giving to businesses facing difficulties is a clear demonstration that our decision-makers believe that investing in our economy to keep it going is the best way to manage its way out successfully from what is a very difficult situation for all," the Malta Hotels and Restaurants Association said.

The Malta Chamber of Commerce, Enterprise and Industry noted that some of the schemes being enhanced were those it had championed and proposed and said the incentives offered "go beyond addressing the immediate liquidity needs, and are aimed at supporting and re-energising businesses and the Maltese economy in the process of recovery."

Measures also received praise from the Gozo Business Chamber, which said that the government had introduced both direct support measures and other incentives aimed at stimulating economic activity.

Nationalist Party economy spokesperson Kristy Debono said that the aid package announced by the government would be helpful to local business owners, but argued that the measures were short-term ones that would not help stimulate longer-term growth.

She cited a study that found that 20 per cent of restaurants have shut down as a result of the pandemic and a marginal increase in the share of the population classified as materially deprived.

“When compared to 2019, residents’ consumption fell by €400 million while that by tourists and other visitors fell by €1.4 billion,” Debono noted. “In this context, the aid announced today is just a speck compared to the blow our businesses have suffered.”