International scientists turned up in Malta for a non-existent conference co-organised by the Civil Liberties Ministry after the event was relocated from Valletta to New York without prior notice.

At least 11 foreign academics, from as far afield as Canada, Australia and the US, travelled to Malta for the International Day of Women and Girls in Science conference on February 10, co-organised by the Royal Academy of Science International Trust (RASIT).

But it was only after they had landed that they were informed the venue had been changed – six weeks ago – to the UN general headquarters in New York, enraged participants told the Times of Malta.

Minister Helena Dalli attended the high-level event in New York on Friday together with other dignitaries, academics and civil society organisations. The minister had announced the important conference, then planned to be hosted at the Mediterranean Conference Centre, in Valletta, last February.

The decision to move it to New York was made in late December but this was never communicated publicly. Participants stranded in Malta were instead invited by the ministry to a ‘parallel event’ consisting of a live-stream of the New York conference, which was also publicly available online.

Several others are understood to have returned home immediately when informed of the blunder and did not attend the ‘parallel event’. 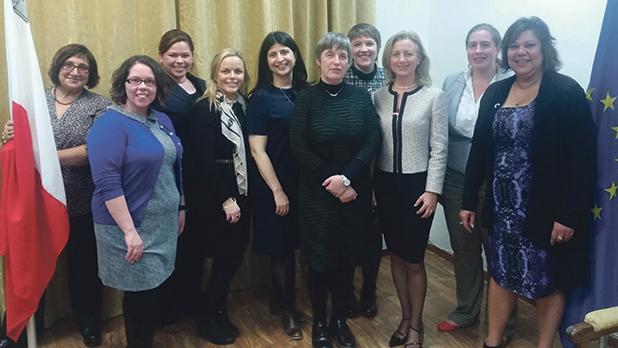 Academics crossed the globe, only to be told the conference was actually in New York.

Leila Joyce Seals, a geologist at the University of Kansas, travelled to Malta along with her colleague, Mackenzie Cremeans, on February 4. She told this newspaper that, on the day of her flight, the event website still listed the venue as being Malta, with no mention of a parallel event.

Ms Joyce Seals was only informed of the change by e-mail two days before the conference and her colleague received no notification whatsoever.

“The biggest problem is not the inconvenience of travelling half way around the world for an event in driving distance of my home,” Ms Joyce Seals said. “We received grant funding specifically to attend this conference. Because we are now not attending, our funding board could very easily refuse future funding proposals and we could be asked to repay the funding with our own personal money, which would cause financial hardship.”

Ms Joyce Seals said the botched organisation could also damage Malta’s standing with international funding bodies, which might be reluctant to give grants for events on the island after the confusion caused by this incident.

A frenzied exchange of e-mails with the Civil Liberties Ministry was met only with insistence that the ministry had not been responsible for registering participants.

RASIT, which co-organised the event, laid responsibility for the failure to inform participants squarely with Maltese officials. In an e-mail to participants, a spokeswoman said that, after early discussions about the event, “there was a lack of communication from our colleagues at the ministry in Malta”.

After several recommendations, the decision was made to move the event to New York. The spokeswoman said Dr Dalli was asked to prepare a letter informing participants of the change in venue, which RASIT would send, but ministry staff “did not act accordingly”.

“RASIT, in close collaboration with the Maltese mission to the UN, were busy organising the event in NYC and, at the same time, were giving explanations to many participants who registered for Malta,” she added.

When contacted, Silvan Agius, head of the human rights directorate within the ministry, denied blame for the incident. He insisted the venue had been changed on RASIT’s own initiative without a clear confirmation to the government and that the same organisation was responsible for the failure to update the conference website accordingly.

Mr Agius said the government had been responsible only for invitations to State officials while RASIT invited academics. He added there had been no specific commitment by the government to notify academics of the change, as claimed by RASIT. “We sent out notifications to everyone we were aware of as soon as we could and organised the best alternative possible,” he said.

“While we regret what happened, we have to stress that the event in New York was a great success. We want to continue our good relations with RASIT and put this incident behind us.”