Actor Omar Sharif, best known for his portrayal of Doctor Zhivago in the hit 1966 film and for his work in Lawrence of Arabia, died of a heart attack yesterday, his agent said. He was 83.

Steve Kenis confirmed the death of one of the few Arab actors to make it big in Hollywood. “Omar Sharif died in Cairo of a heart attack sometime this afternoon,” Kenis said when reached by telephone.

He also confirmed that Sharif, who played a wide range of dashing and dignified characters while building a reputation as an expert bridge player, had been suffering from Alzheimer’s disease. Tributes to Sharif were quick to flow on social media. Egyptian actor Khaled El Nabawy on his Twitter feed, @KhaledElNabawy, said: “RIP OMAR SHARIF, Goodbye to a living legend, good bye to a source of inspiration for generations to come.”

Sharif won international fame and an Oscar-nomination for best supporting actor for his role in Lawrence of Arabia with Peter O’Toole. He later became a huge star in his own right for his portrayal of the title character in the film based on Boris Pasternak’s novel Doctor Zhivago.

Born Michel Shalhoub on April 10, 1932, to a wealthy family in Alexandria, Egypt, Sharif became interested in acting while studying mathematics and physics at university in Cairo.

He worked in his father’s timber business for several years before realising his dream with a role in an Egyptian movie, The Blazing Sun in 1954 opposite the Middle East’s biggest female star, Faten Hamama.

Raised as a Roman Catholic, Sharif converted to Islam and married Hamama in 1955, taking on his new name. They had a son, Tarek, who at age nine played Yuri in Doctor Zhivago, but the couple divorced in 1974. Hamama died in January of this year.

Goodbye to a living legend, goodbye to a source of inspiration for generations to come

Despite Sharif’s image as a sex symbol and eligible bachelor, he did not remarry, saying he never fell in love with another woman.

“I’ve always been extremely lucky in my life,” he told Al Jazeera television in 2007, while reflecting on how he “might have been happier” staying in Egypt where he had a contented family life and was already a star. 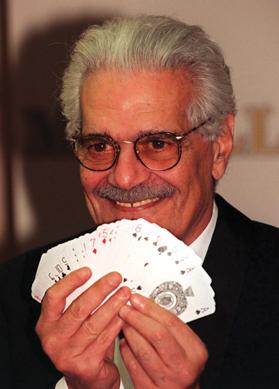 Film star Omar Sharif who passed away yesterday was quoted as saying he would rather play bridge than make a bad movie. Photo: PA Wire

“Even for Lawrence of Arabia I didn’t ask to be an international actor,” he said. “When going to America and becoming famous, it gave me glory but it gave me loneliness also and a lot of missing my own land and my own people and my own family.” With more Egyptian movies to his credit, he was picked by director David Lean to play Sherif Ali in the epic Lawrence of Arabia alongside O’Toole, Alec Guinness and Anthony Quinn. His portrayal of Lawrence’s friend earned Sharif an Academy Award nomination for best supporting actor and a contract with Columbia Studios. It won him renewed admiration when the film was restored and re-released in 1989.

After Lawrence of Arabia, Sharif played Sophia Loren’s Armenian husband in The Fall of the Roman Empire and several other roles before landing the title role in Doctor Zhivago.

Despite criticism, the film and Sharif’s portrayal of a physician and poet caught up in the Russian revolution were a hit. Confirming his flexibility, Sharif next played a Nazi officer in The Night of the Generals, a Jewish gambler in Funny Girl opposite Barbra Streisand and an Austrian prince in Mayerling. In later years, he appeared in TV mini-series and a steady string of films. For his 2003 role as an elderly Muslim shopkeeper in the French film Monsieur Ibrahim, he won the best actor award at the Venice Film Festival.

Reportedly fluent in English, French and Greek, Sharif became known for his passion for bridge and thoroughbred race horses. He wrote many books and newspaper columns about bridge and licensed his name to a computer game called Omar Sharif Bridge.

“I’d rather be playing bridge than making a bad movie,” he was once quoted as saying.

“I decided I didn’t want to be a slave to any passion any more except for my work,” he said. “I had too many passions – bridge, horses, gambling. I want to live a different kind of life, be with my family more because I didn’t give them enough time.”