Nationalist leader Adrian Delia warned on Monday that he is prepared to go on the warpath against his opponents within his own party.

The message, which was relayed to Times of Malta, was sent via WhatsApp at 5am to the members of the party’s administrative council.

It came as The Sunday Times of Malta reported that the PN’s executive committee, its second-highest decision-making body, is set to tackle allegations of domestic abuse being made against Dr Delia.

The PN leader is facing pressure to resign after allegations of domestic violence were made against him by his wife in separation proceedings. There have also been potential compromising leaks of audio and video files concerning Dr Delia, some in a domestic setting.

“Today Christmas time has ended. For most a time of peace and caring. It was alas for us a time of battle,” Dr Delia wrote in his post.

“In war there are mercenaries who wage it merely for monetary gain. Most are so. Few, indeed very few, heroes for love of God and country. Sometimes they turn the battle and at times of rare they win the war. Eternally history lauds them. But sadly most are lost not by lack of them but by traitors who cross the line and sell their souls an instance distraught which can a nations destiny forebear. 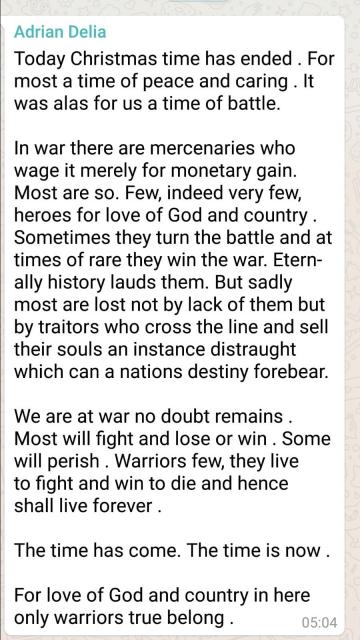 “We are at war no doubt remains. Most will fight and lose or win. Some will perish. Warriors few, they live to fight and win to die and hence shall live forever “The time has come. The time is now.

“For love of God and country in here only warriors true belong,” he wrote.

One member who received the message replied bluntly: "if you want war, you will get it."

Dr Delia has consistently vowed to stay on, branding accusations against him as part of a plan to oust him by exploiting “private life” issues.

On Saturday, his communications officer replied to questions over a rumour that he has considered stepping down by saying that “Dr Delia has never submitted his resignation and has no intention of resigning from the position of Leader of the Opposition and Leader of the PN”.

PN executive committee president Mark Anthony Sammut told The Sunday Times that the allegations against Dr Delia were “very serious and should be addressed by the party organs”.

Only about eight of the 28 Nationalist MPs are so far known to have publicly pledged their support to Dr Delia on Facebook.