Nationalist Party leader Adrian Delia is being urged to skip a speech he has planned for Sunday and instead “reflect on the current crisis within the Nationalist Party”.

Dr Delia is scheduled to hold a political gathering at the PN's Mellieħa club on Sunday morning. However, in a letter delivered to him on Saturday, the PN’s Mellieħa regional committee implored him to “see reason”.

A source on the committee told Times of Malta that the members unanimously agreed that given the current turmoil within the party, it would be a disservice to PN supporters to act as though it was “business as usual”.

“We are in a situation where we have just had a number of very senior resignations from the party leadership. There is an ongoing debate over the very future of the party, so we don’t think this is the time to be standing up at a podium and criticising the Labour government,” the source said.

Members of the regional committee were also concerned that if Dr Delia were to hold a political activity in Mellieħa – considered to be one of his strongholds – the chance of tensions rising were too great. 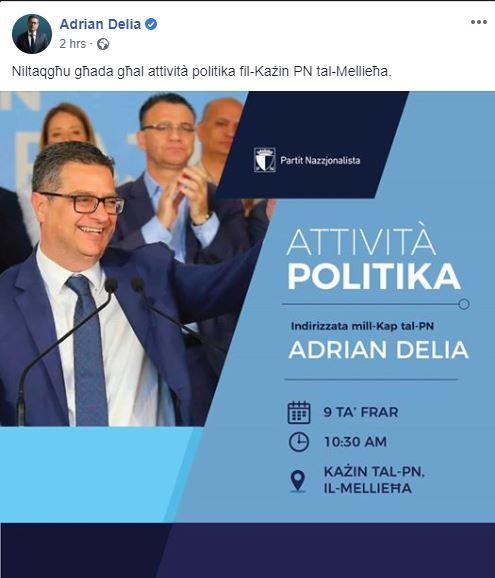 “What if he goes on about the internal divide we have at the moment and someone says something and the whole thing gets out of hand? What we need now is mature internal discussion, not a Sunday sermon,” the source said.

Dr Delia is facing mounting pressure to step down from his own colleagues in the Nationalist Party.

Dr Delia however has dismissed that claim, insisting that he still enjoys the support of his party’s parliamentary group.

Earlier on Saturday, he gave an interview on party radio station NET FM in which he slammed his internal adversaries, saying "some think that the PN belongs to them".

Delia to forge ahead with activity

On Saturday afternoon, party sources confirmed that Dr Delia planned to forge ahead with the Sunday activity. An SMS was sent out shortly after Times of Malta’s report, urging PN activists to attend.

Meanwhile, sources in the regional committee said that if it were up to them, they would shut the Mellieħa party club doors.

In a statement later in the evening, the Mellieħa party club said that at no time was a decision taken to not allow the PN leader to enter the premises.