There was once a man of average build, stationed on a Maltese galley, who was unfortunately known for the craft of being able to break wind in a thousand ways. His Muslim peers, who detested this act, had to put up with him while he let rip 200 at one go.

Called Buonavoglia, this man made it into the description of en Bażbaż (to rip a long one) in the first comprehensive dictionary written by a Maltese person – which has just been published after more than two centuries. 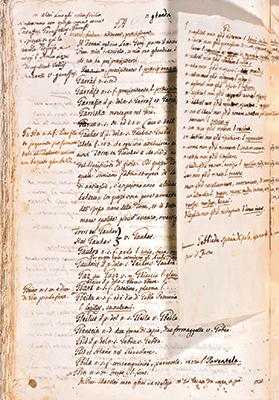 De Soldanis left some notes in his manuscript.

Anyone familiar with Maltese lexicography knows that the first published Maltese dictionary is Mikiel Anton Vassalli’s Lexicon, originally issued in Rome in 1796.

But 30 years before him, Ġan Franġisk Agius de Soldanis completed his own dictionary, Damma Tal Kliem Kartaginis mscerred fel Fom tal Maltin u Ghaucin (A collection of words on the lips of the Maltese and Gozitans.)

It took de Soldanis 17 years to finish his manuscript, translating words from a Gozitan dialect into Old Italian. Unfortunately, he had to wait 250 years for it to be published. And it happened in Florence, which is right where he would have wanted to publish it.

According to university lecturer Olvin Vella, there are four reasons de Soldanis probably did not manage to print it back then: lack of financial capital, being taken ill soon after completing it, the necessity of spending years in Italy while it was being printed and a small market of readers.

In those times, only about two-and-a-half per cent of the Maltese population of 100,000 was literate. In fact, Ignazio Saverio Mifsud had faced a similar problem, and the pages of his printed Biblioteca Maltese were eventually used to wrap peppers when paper was scarce.

De Soldanis’ work does not read like a typical dictionary but is more like an encyclopaedia about life in 18th-century Malta.

For Dr Vella, de Soldanis was the first person to write about the Maltese language so passionately. In fact, he feared that the language was dying a slow death, especially compared to that found in manuscripts penned a couple of centuries before.

So he documented the language using its phonetic characteristics, and his dictionary even includes sounds found only within the spoken vocabulary.

One such word is aihaghau, similar in a way to ‘cheers’ or saħħa today. De Soldanis notes that it was uttered specifically by men who were tipsy or drunk on alcohol, usually in social company or around a table.

No document about Maltese life would be complete without colourful swearing and vulgarity, and de Soldanis, a Catholic Canon, included some in his work, as he thought it derived from Punic times and therefore had great linguistic value.

He also took the liberty of including his opinion in several definitions, such as in the description of the Fungus Rock, known today as Ġebla tal-Ġeneral.

De Soldanis, a Gozitan just like Daniel Cilia, who designed Damma, says that Gherk General, should actually be referred to as Fungo Gozitano, not Maltese.

Damma is a group effort: it was digitally transcribed by Rosabelle Carabott and Joanne Trevisan under the direction of Dr Vella, designed by Daniel Cilia and published by the Kunsill Nazzjonali tal-Ilsien Malti, the National Library, the Department of Maltese, l-Akkademja tal-Malti, Heritage Malta, the University of Malta Research Innovation and Development Trust, BPC International and the Gozo Ministry. 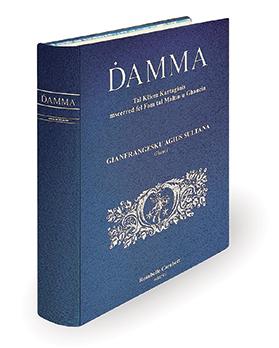 The publication of Damma was a dream come true for the university, and it took Ms Carabott seven years to revise and edit it.

Mr Cilia has paid attention to every detail – from the colour of the paper it was printed on to the creation of drop caps for every letter of the Maltese alphabet. He also made sure the colour of the font illustrated the effect of ink oxidisation, something that is quite common in old manuscripts.

The publication of Damma is faithful to de Soldanis’s final copy, which would have been sent to the printer in 1766. Those words that he actually struck out in the manuscript have been greyed out in the publication, while his footnotes, marked with a doodle of a pointing forefinger, called manicula, have also been reproduced.

The front page was designed on the instructions provided by de Soldanis in his 18th-century draft.

The publication of Damma has been welcomed in the local market, and half of the first run has already found a home.

A few of the dictionary’s words of note

■ Ghaujema: in Malta, a lot of women, especially those from Senglea, swim so well that they swim better than men.

■ Kagħka: pastries that come in different shapes and sizes, usually in the shape of a circle… those made at the monastery of St Ursula (the traditional ‘bones of the dead’ in November) were distributed after the feast of the birth of our Redeemer, maybe to indicate the Saviour’s eternity.

■ Fegkulla: dough shaped like the figure of a man or woman with a coloured egg on its chest or hands, baked during Holy Week and gifted to children to eat at Easter.