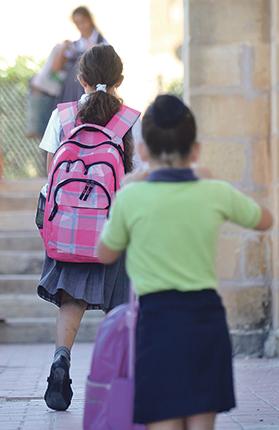 Children are regularly in class today, as the teachers’ strike was called off on Monday. Photo: Chris Sant Fournier

Teachers will be giving feedback on improvements to their working conditions in the coming weeks as the MUT launches a consultation process before concluding talks with the government by the end of the year.

On Monday, the Malta Union of Teachers called off a nationwide strike, which would have affected all State and Church schools, after an agreement on its pay raise request was reached. The strike was to take place today.

Talks with the government are, however, still under way as discussions shift to improvements in working conditions.

MUT president Marco Bonnici told the Times of Malta now that a salary agreement had been reached, the discussion would focus on working conditions.

While that agreement had yet to be reached, he was adamant that the MUT’s target was to have a new collective agreement in place by the end of this year.

On the financial agreement, which will see teachers receive an increase of over 20 per cent over the next five years, Mr Bonnici said that while the details were still being finalised, he could confirm that the increase will not be four per cent per year for five years, as reported erroneously by some teachers.

Asked to clarify how it would be calculated, the MUT head refused to divulge further details, stating only that the financial package was still being finalised and details would be made available to members in the coming weeks.

“We plan on having a consultation period very soon where our members can evaluate the agreement and put forward their feedback and possible suggestions, so that by the end of the year we can sign the agreement,” Mr Bonnici explained.

The agreement came after months of meetings between the government and the union, which was initially dissatisfied with the government’s response.

In a last-ditch effort to put pressure on the government, the MUT issued a set of directives last month, set to culminate in a day-long strike.