According to the World Stroke Organisation, there are approximately 13.7 million new cases of stroke each year. To some extent, this may not be news to the vast majority of people. In all likelihood, the average reader will have come across someone who suffered a stroke, whether within immediate family or merely acquaintances. However, what very few people know is that at the heart of all these cases is a pervasive condition called Atherosclerosis – which lies silent and asymptomatic in most people for many years, before it finally surfaces with debilitating consequences.

Atherosclerosis is a vascular disease which is characterised by the thickening and hardening of blood vessel walls. When fatty substances such as cholesterol, or cellular waste products start to accumulate on the inner linings of an artery, they cause a progressive narrowing of the vessel’s opening, and consequently restrict the free flow of blood. This build-up is referred to as ‘plaque’, and it may eventually lead to the total blockage of a blood vessel.

Heart attacks are one such symptomatic manifestation of these occlusions, brought about by the narrowing of arteries of the heart vessels. Another example would be when plaque in a vessel close to the brain ruptures. This may lead to the formation of a blood clot, which may then block a narrower vessel in the brain and cause a stroke.

Atheroscleroris lies silent and asymptomatic in most people for years

When atherosclerotic plaque accumulates in the walls of an artery, the obstruction of blood flow that ensues is more commonly referred to as a ‘stenosis’. Localisation and grading of the severity of a stenosis forms a large part of the diagnostic process that is carried out when examining a patient who is complaining of symptomatic plaque deposits. Enter ultrasound imaging. It is low cost, non-invasive and permits a quick assessment of stenosis by measuring vessel thickness, making it extremely popular for this purpose.

Ultrasound is very often one of the first line tools used to assess a patient’s carotid artery in the neck, before deciding whether to refer the patient for more advanced or invasive imaging methods such as magnetic geomancer (MR)-based angiography or computer tomography (CT) based angiography. The latter methods are not only more expensive to carry out but pose slight risks to the patient.

CT angiography, for instance, is considered to be an invasive technique due to the radiographic exposure it causes to the patient. Angiographic techniques in general also carry some risk of toxicity to the kidneys, due to the chemical contrast agent that needs to be injected into veins in order to show up on either CT or MR modalities.

In ultrasound, a classic technique that is well-established to image arteries is 2D Doppler Imaging. Unfortunately, the benefits of this technique come at the expense of effectiveness, because although a trained ultrasound user might be able to utilise this tool rather proficiently, it also has its own limitations, which render it inaccurate in certain circumstances. For example, this technique may prove inaccurate if the disease is spread across most of the length of a vessel, or in vessels with low to moderate degrees of blockage. 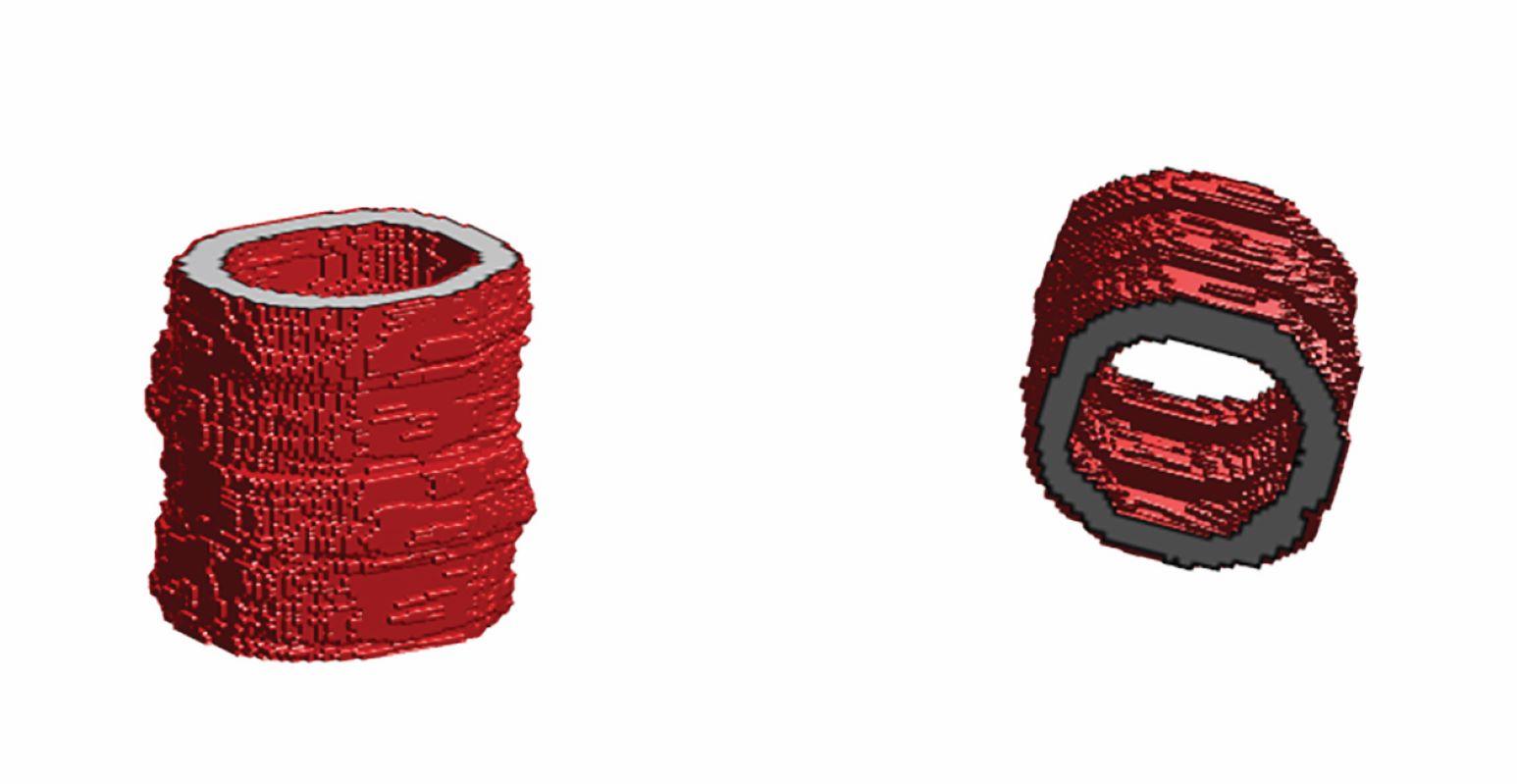 Research is showing that 3D monitoring of plaque progression may provide a better indication of sites in the artery which are at risk of rupture. Various metrics have been proposed. The most sensitive one quantifies plaque by measuring vessel wall volume (VOW). This is done by using the segmented boundaries of the outer and inner layers of the artery wall. Imagine two pipes, one within the other; the thicker the volume between the outer and the inner pipe, the higher the degree of plaque presence. There is, therefore, a correlation between the vessel wall volume and plaque.

Methods to segment the inner and outer walls of the artery are required to help generate VWV measurements with high accuracy and if possible – automatically, so that the doctor may be more efficient and faster in obtaining the measurements he or she needs.

The work in my doctoral research carried out at Cardiff University, and in collaboration with the Centre for Biomedical Cybernetics at the University of Malta, has sought to study this problem and to propose new software tools that may be incorporated into ultrasound machines to help this measurement process take place automatically and accurately.

The solution proposed is based on artificial intelligence using neural networks. Artificial neural networks (ANNs) are computational systems that mimic the way humans learn. Networks are made up of nodes – similar to the brain’s neurons. They are applied to the problem by being taught how to behave after being shown several examples, along with a corresponding desired behaviour. After sufficient training, if the network is successful, it may carry out the task on its own with minimal supervision.

ANNs find application in a wide variety of areas. Recently, deep (or in other words, very large) structures of ANNs have been proposed to solve more complex medical image processing tasks, including segmentation, and results obtain­ed have outperformed many of the other classical segmentation techniques.

For the problem at hand, a number of patients were recruited to have images of their carotid artery taken using a research ultrasound machine available at the University of Malta. Both healthy and symptomatic patients were recruit­ed. The ultrasound images of their carotid artery provided a clear indication of how much plaque or otherwise was present along the artery walls.

With the help of experienced sonographers, the ultrasound images were labelled such that the inner and outer walls of arteries were marked. A deep neural network was then built in software and trained on the labelled ultrasound images for it to learn how to identify the arterial walls by itself. The network was further enhanced by constructing within it a model, containing certain ‘rules’ regarding the shape of arteries in general.

The rules provide basic concepts to the network – for example that the artery cross sections are of course expected to be cylindrical or elliptical, but never rectangular – so as to ensure that it does not learn nonsensical models. This ensures that what the network learns, in turn leads to it producing correct outputs when it is then asked to find the artery wall boundaries on its own. After the network is trained with several thousand examples, its performance was tested by asking it to detect the arterial walls in ultrasound images it had never seen before.

The result was pleasantly successful. The neural network was able to automatically detect arterial wall boundaries on its own, and to help correctly determine the vessel wall volume to within less than five per cent difference than that measured by a human expert.

Further research could pave the way for the technique to be incorporated in ultrasound machines, and to help doctors diagnose atherosclerosis more efficiently.

The research work summarised in this article was partially funded by a Malta Government Scholarship Scheme grant.

Dr Ing. Carl Azzopardi carries out research on medical imaging with the Centre for Biomedical Cybernetics, University of Malta. He is head of biomedical engineering at St James Hospital Group and managing director of Bioscint Engineering Ltd.