Air-conditioning temperature limits and new lighting rules have been introduced for the public sector as global energy prices skyrocket.

According to guidelines issued to all government and public sector entities, air conditioning is to be set at a minimum of 24 degrees Celsius when cooling and no higher than 21 degrees on heating.

An exception has been made for hospitals.

The rules, issued by the Energy Ministry, also call for all façade lighting on public buildings and monuments to be switched off late at night. 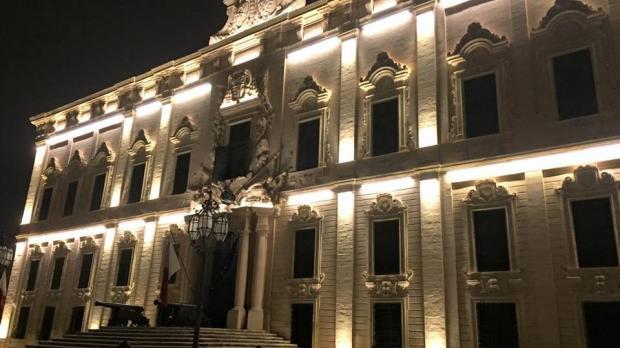 The decorative lighting on the facades of public buildings and monuments will be switched off late at night.

MaltaToday reported the new rules on Sunday, with the ministry confirming details of the new policy to Times of Malta.

A spokesperson for the ministry said the new guidelines are a voluntary measure, to encourage efficiency and energy saving across the public sector.

"Whilst Malta has obtained a derogation from a mandatory reduction in gas consumption, it still wants to maintain its ambition towards the national energy targets. This will be done through incentivising energy efficiency and consumption reduction to continue paving the way towards a climate neutral by 2050," the spokesperson said.

"In the case of the public sector, the guidelines issued provide actions to be applied public sector in all public buildings. The action is being carried out in collaboration with the Office of the Principle Permanent Secretary and seeks to minimise energy-wasting habits. The guidelines are applicable for all public buildings, entities and ministries."

The new guidelines call for appliances to be switched off when not being used and encourage the use of more energy-efficient light fittings.

In April, the government committed €200 million to protect consumers from surging energy prices which went through the roof as a consequence of the Russian invasion of Ukraine.

On Friday Times of Malta reported that the funds allocated by the government to subsidise utility bills will have to be topped up by another €50 million to cover rising electricity costs.

Government projections indicate that the situation could be even worse next year.

Enemalta projects that the subsidies could cost the taxpayer something between €300 million and €400 million to keep consumer prices stable throughout 2023.

Malta is currently buying electricity from the European grid for more than five times the price it used to in 2020.

The price Enemalta pays for electricity from the interconnector is determined by a daily auction on the open market.

Malta only partially relies on the interconnector from Italy to meet electricity demand.

The country’s energy supply is a mix of the interconnector cable and the gas-fired power station in Marsaxlokk.

Several European Union nations have launched power-saving drives as they seek to reign in soaring gas and electricity bills and conserve resources.

A snapshot of national efforts so far:

- Public buildings - Italy launched earlier this year what it called "Operation Thermostat" to try to lower heating and cut back on air conditioning in schools and public buildings.

France and Germany have also called on their public sectors to lead the way in saving power in the same way. In Germany, public buildings including the Bundestag, or parliament, will have to do without hot water.

- Closed doors, open shops - In France shops that use air conditioning must keep their doors closed or face a fine.

And in Germany shops have launched an advertising campaign to inform customers that they can go inside, even if the doors are closed.

In Spain, since August 10 air conditioning has to be turned down and be set at no lower than 27 degrees Celsius during the warmest months of the year, in rules affecting everything from public transport to shops, offices, theatres and cinemas.

The legislation also affects heating in winter, when temperatures can be set no higher than 19C.

By the end of September, any air-conditioned or heated premises in Spain must have an automatic door-closing mechanism installed to avoid energy waste.

A two-square-metre digital LCD screen uses the equivalent of the average annual consumption of a household for lighting and household appliances, except heating.

Several cities have lowered the temperature in their swimming pools and made cuts in urban lighting.

A housing cooperative in the eastern city of Dresden made national headlines when it announced it would limit hot water to certain times of day.

And Vonovia, Germany's largest property group, plans to limit the temperature in its 350,000 homes to 17 degrees Celsius at night.

In Finland people are being urged to spend less time in their beloved saunas.

- Public lighting - In Vienna, there will be no Christmas lights this year on the Ring, the famous boulevard that encircles the centre of the Austrian capital.

And the lights at the Christmas market in the square in front of the city hall will only be switched on at night and not at dusk, about an hour later, on average, every day.

In Spain, from 10 pm shops have to switch off window-display lighting in a move also affecting the illumination of public buildings.

In Germany, the Bavarian city of Augsburg has turned off its fountains, dimmed the facades of public buildings at night and is debating switching off some under-used traffic lights.

- Small daily gestures - Under its "A degree lower" campaign, Finland will from October encourage its citizens to turn down their radiators, take shorter showers and not heat their garages.