It said measurements over the past week were 100-200 times higher than the levels expected in areas not exposed to any pollution sources.

The air over Valletta and Senglea was found to have a high concentration of ultrafine particles during the time ships are transiting the Grand Harbour. These included cruise liners and smaller vessels.

Such particles, which are deposited in the lungs and transferred into the blood, are a major risk to human health as they trigger severe heart and lung diseases, the society said.

The analysis was made by scientist Kare Press-Kristensen, Senior Advisor for Green Transition Denmark, an independent NGO promoting the green and sustainable transformation of society.

He presented the results at a press conference with BirdLife Malta officials led by head of conservation Nicholas Barbara. 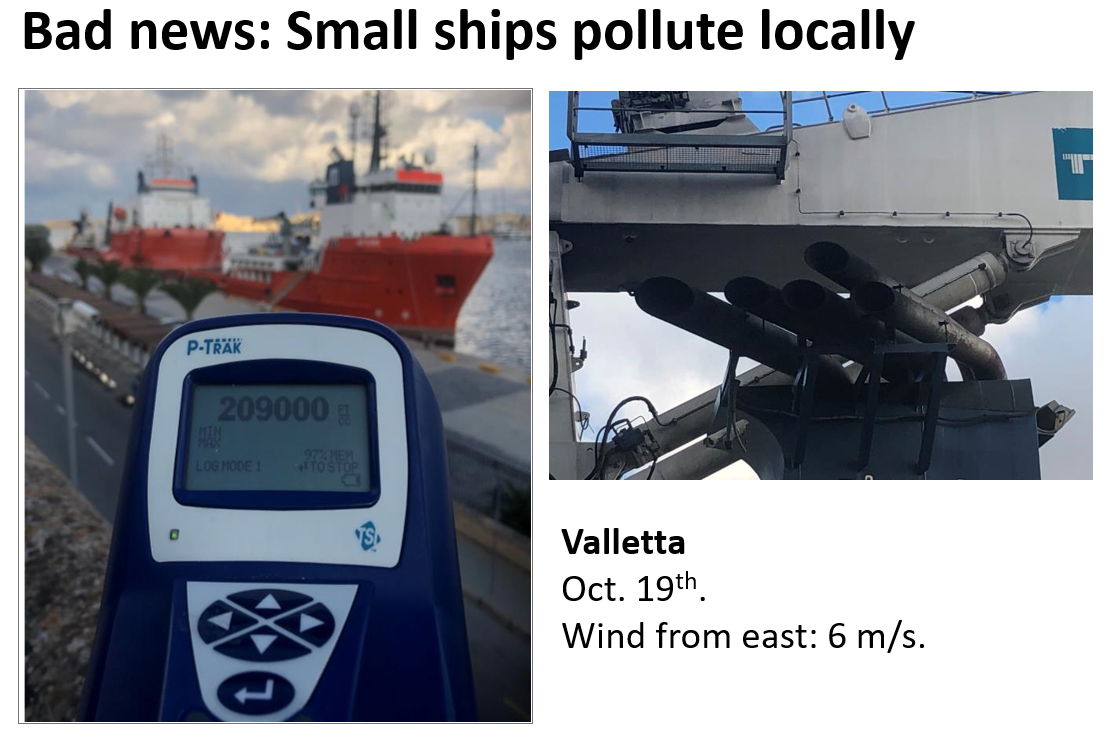 Press-Kristensen carried out the analysis for LIFE4MEDECA, an EU LIFE-funded project leading efforts for the establishment of an Emission Control Area (ECA) in the Mediterranean basin.

The partnership groups organisations from several Mediterranean countries and its advisory board includes the European Commission.

BirdLife is a member of the network Together against Air Pollution from Ships raising awareness about the damage caused to health and climate by maritime transport air pollution in the Mediterranean. The network wants to see large ships obliged to use cleaner fuels and flue gas cleaning systems, limiting sulphur (SOx) content and nitrogen (NOx) emissions when entering the Mediterranean.

Kare Press-Kristensen said while there is clean air on the island, the bad news is that small ships pollute locally whilst large ships visiting the Maltese Islands pollute entire cities.

The effects of air pollution on human health include cardiovascular diseases such as strokes and heart diseases, together with airway diseases and cancer, which are the main causes of death in Malta.

Speaking about solutions, he listed the benefits of Emission Control Areas in Europe such as the Northern European ECA comprising the Baltic and North Seas. Thanks to stricter controls in those areas, a high reduction in sulphur on land (50% drop in 2015) was registered together with significant health and economic benefits for society which came about without any notable price increases for consumers or extra costs for ship owners and authorities.

While also mentioning the use of electric ferries as an area of great potential in Malta, another important solution, he said, was the use of shore power at berth which would also significantly improve public health in Malta.

In 2020, Infrastructure Malta launched the Grand Harbour Clean Air Project, a €50 million shoreside electricity project whose aim is to cut over 90% of air pollution that cruise liners and Ro-Ro ships produce when visiting the Grand Harbour. Shore-to-ship power facilities will allow cruise liners to switch off their gas or HFO-fired engines and plug in to shoreside electricity points.

Estimates show how shore power can also be good for business, with negligible extra costs per passenger per port.

An example cited during the press conference showed that whilst a cruise ship uses about 30 kWh per passenger and normally produces electricity for €0.18/kWh, if port electricity could be sold for €0.23/kWh (€0.05 higher), the extra cost per passenger per port would amount to just €1.50 or 1% (30 kWh x €0.05 per kWh) which is less than the price of a cup of coffee at a cruise port.

Translated into a typical seven-day cruise visiting four ports, the increase would be €6. (€670 without shore power vs €676 with shore power).

Press-Kristensen also underlined the need for electrically powered ferries, noting that they were particularly needed in Malta since the harbour is surrounded by a densely populated area and people therefore suffer whichever the wind blows.

In a statement, ERA acknowledged the impact of port activities on air quality and said that it has already held discussions over the matter with Birdlife.

The Environment and Resources Authority and the University of Malta have been monitoring the air quality downwind of the Grand Harbour in Gardjola Gardens, Senglea, since May 2020.

"The impact of the shipping industry on ambient air quality cannot be measured at random over selected days but has to look at reliable averages over extended periods of time.

"Further scientific data is necessary to be able to evaluate the situation and enough samples need to be taken after cruise-ship activities return to post-pandemic normality in order to have a clear picture of the situation," it said.

ERA added that Transport Malta has already taken steps to improve the situation, through, among others, a €50 million shore-to-ship project that allows vessels to run off power coming from the shore rather than from onboard generators, contributing to significantly cleaner air in the area.