The unmanned private business jet that slammed into a building on Wednesday was properly secured and parked according to procedure, preliminary investigations show.

The Air Accidents Investigation Bureau’s chief investigator, Frank Zammit, told Times of Malta he had “no doubt that everything was done as it should be”.

He said the indications so far were that the Dassault Falcon 7x was properly secured, adding it seemed the parking procedure had been followed to the letter. 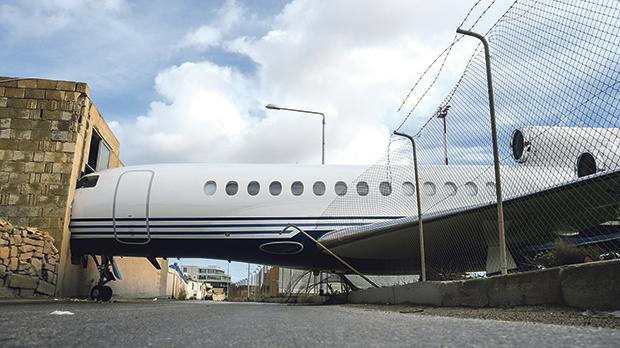 The Polidano Group-owned building did not suffer extensive damage although the machinery inside will cost the company “tens of thousands”, according to the company’s legal representative Jean Paul Sammut. Photo: Jonathan Borg

Mr Zammit said the first signs were that, rather than the chocks giving way, the strong winds prevailing late Wednesday probably forced the three-engined, French built plane to move from its berth. It careened to the side of Apron 4, slid downhill gaining momentum, smashed through part of the airport fence, crossed a perimeter road and crashed into the Polidano Group building 70 metres away from its parking spot.

“It was a one-off accident, an act of God we could not have been prepared for,” Mr Zammit said.

Once the Bureau of Air Accident Investigation concludes its work and draws up its report, it is expected to transmit its findings to safety investigations across Europe.

Mr Zammit dismissed reports that damages were put at anything up to €2 million, insisting it was too premature to make such an estimate at this stage. The nose and cockpit suffered the most, though it has still to be established to what extent.

Asked whether any safety procedures were likely to be changed as a result of the accident, Mr Zammit said that there were no such plans at the time being though all depended on the outcome of the inquiry.

The airplane was moved to a hangar on Thursday evening, after the arrival of team of French aviation experts. The Civil Protection Department, the Armed Forces of Malta, the police and a teaching team from Malta International Airport assisted in the operation, an airport spokeswoman said.

A temporary fence has been erected.

This was not the first time bad weather wreaked havoc at the Luqa airport.

A cyclone in 1936 had left a trail of destruction at the then Ħal Far aerodrome. Three hangars and all the aircraft belonging to two Naval Air squadrons based there were destroyed, according to aviation historian Richard Caruana. 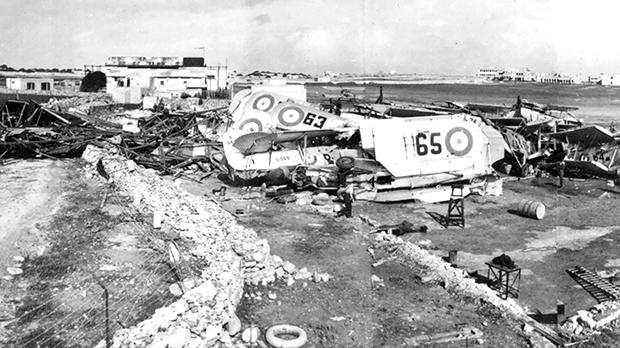