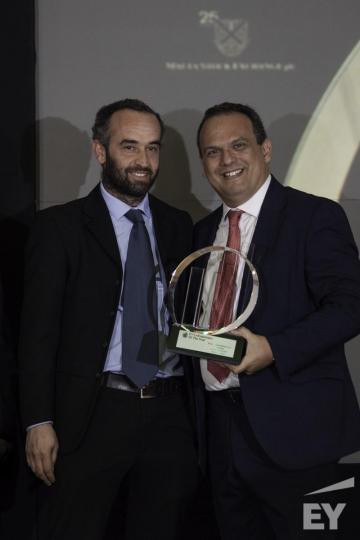 The accolade means Mr Pisani will be heading to compete in EY's World Entrepreneur of the Year award in Monaco in June. He will be joined by some of the world's key game changers and innovators from over 70 countries. Previous winners in Monaco have included trail-blazing entrepreneurial drivers from a wide range of fields – Amazon to Cirque du Soleil to LinkedIn.

Commenting on this first Maltese edition of these awards, Ronald Attard, EY Malta’s Managing Partner said: “Tonight, we at EY Malta are very proud to bring this strong and globally recognised tradition to Malta. I hope that this tradition takes root and continues to flourish in the coming years.

"Initially we were impressed by the interest this initiative generated. When we looked at the nominations, however, we were even more impressed – by their quality, their volume and depth of their response."

EY has been holding the awards for three decades. They have now spread to over 70 countries, creating a global network of 50,000 entrepreneurs. Over half of today’s top 100 NASDAQ companies have won EY’s Entrepreneur of the Year award, and most received the award before they achieved top 100