I have only had the pleasure to come across Joe Pulè recently, through our common interest in translation and a number of online pages that writers in Maltese use to share questions and suggestions. I was surprised and happy to be asked to write this review, especially since I was looking forward to the publication of Pulè’s translation of Alphonse Daudet’s Lettres du mon moulin.

My impression of Pulè is that of an unassuming academic who, having left the University of Malta in the late 1970s where he was Professor of Mathematics, has travelled his fair share of Europe and after teaching and carrying out research in Mathematical Physics for over 40 years at University College, Dublin, is now retired with his wife in Ireland.

In more ways than one, he re­minds me of Daudet. It is possible that these similarities at­trac­ted Pulè to the French writer in the first place. This is Pulè’s first publication, although by no means his first liaison with translation. Pulè wrote these stories based in the Mediterranean, in Maltese translation, while in Ireland.

Daudet wrote the short stories that make up this volume while in Paris, re­calling what had been an idyllic stay in Provence in southern France – the setting makes up the main and most memorable element of his writing. But he travelled often, and for long stretches at a time, to Corsica and Algeria, and these experiences provide him with further settings in his  Les Organes and Les Sauterelles.

Daudet was only 23 when he started thinking about writing the stories in this collection. It was the summer of 1863 and what in­spired him was Fontvieille, the village that featured the mill made famous by Daudet’s writing. In spite of various other ac­tivi­ties that Daudet was involved in, including acting as third secretary for the Duc de Morny, Napoleon III’s half-brother, between 1860 and 1865, and writing for newspapers, as well as persistent ill-health, his literary skills shone through and gained a loyal and loving reading public. 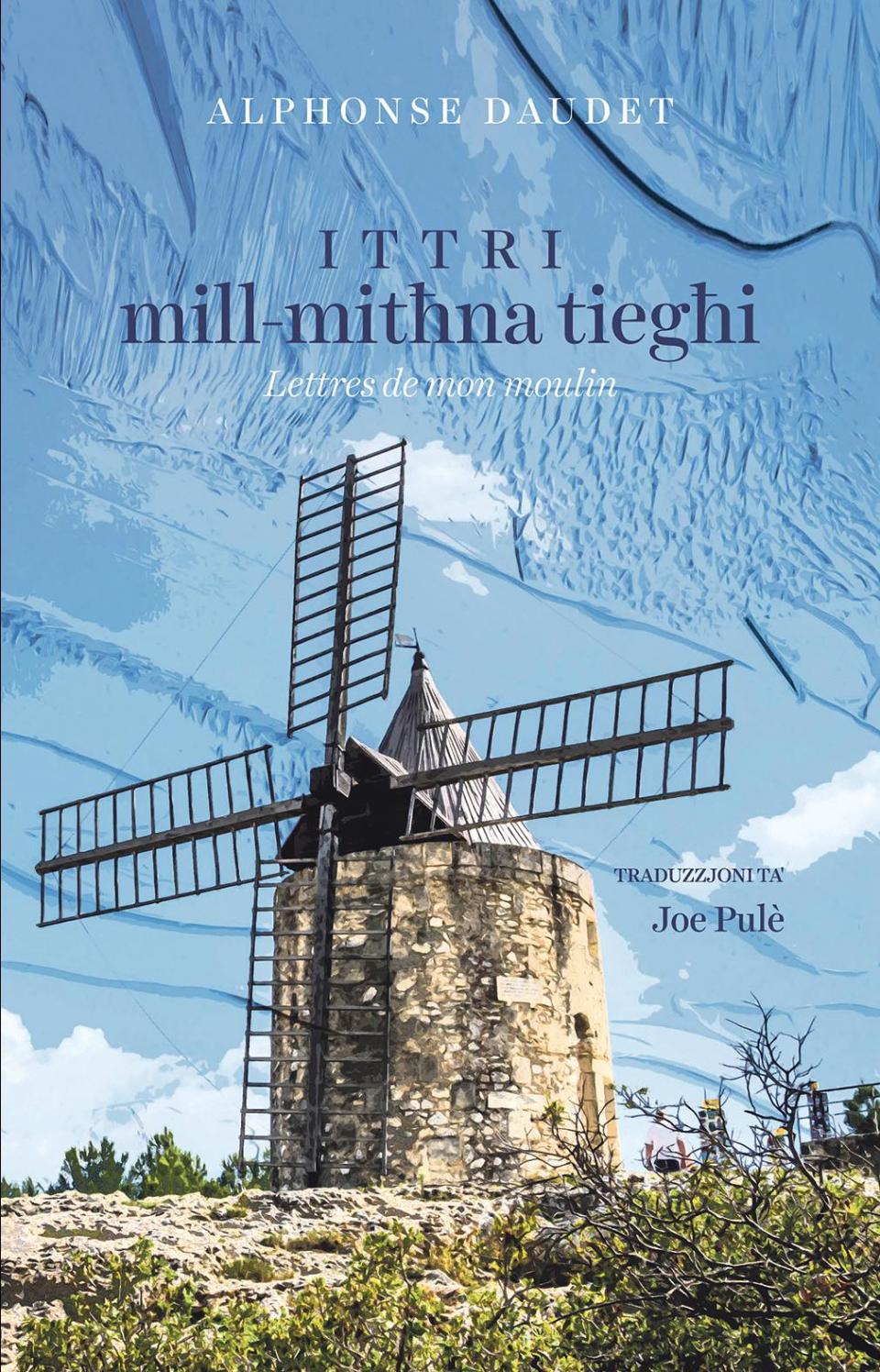 Legend had it that Daudet bought the mill that gives this collection its name, and saw through most of his life there in the company of a panoply of odd villagers, farmers and their non-human companions, be they animals or natural elements. The myth persists, but is untrue. Daudet was fêted as an adopted son of the South and an ambassador for Provence, an image supported by his friendship with Frédéric Mistral. But unlike the 1904 Nobel Prize winner, Daudet did not share the same enthusiasm for a return to the use of provençal, the language of troubadours, and the independence of Provence.

Together with his early popular stories, Daudet became most­ly known for L’Arlesienne, a three-act drama with music by Georges Bizet, Le Petit Chose, Tartarin de Tarascon, Contes du lundi and Lettres de mon moulin. Dau­det’s pop­u­larity with readers of French has been constant through the years particularly thanks to gene­rations of young school children who have read and studied some if not all of these texts.

In Malta, students of French used to be encouraged to engage with Daudet, mostly for his accessible, imaginative and creative construction of settings, characters and stories that propel readers to learn more about France in the 19th century and the harmonious ways in which a language as beautiful as French can be used. Some of Daudet’s writings have also been translated by Toni Aquilina and Paul Zahra.

Daudet’s charming use of the language both helps and hinders any translator. On the one hand, his descriptions of settings, his portraits of human characters, his elaboration of animal ones, and the sharp and sometimes humorous and cheeky observations are sure to attract and inspire writers who engage with him. On the other, these characteristics are a challenge that has to be overcome through close reading, writing and re-writing Daudet’s turn of phrase, and being brave, clever and skilled enough to faithfully extract Dau­det’s vision and es­sence while writing it in ways that speak to his readers in the Maltese language. Pulè achieves just that.

There are many things I enjoyed about this edition. I liked Pulè and his editor’s decision to employ various tools to immerse us into Daudet’s way of bringing his stories to life. They keep original terms in French or Provencal as well as Arabic and employ them regularly to colourful effect throughout the stories. They distinguish between the different languages in subtle, clear ways, and have them play with the Maltese text in correct yet entertaining as well as cheeky ones. Notes to the text are done well, are not intrusive, and help the reader de­velop a mental and emotional setting, and become more curious about Pro­vence, Corsica and Algeria.

The importance of animals in Daudet, and Pulè’s skill to bring everything close up and personal, is an element that stands out in this translation. The birds, rabbits and goats that star and even make their voices heard in L-Ewwel Jiem fil-Mitħna, Il-Mogħża ta’ Monsieur Seguin and Il-Bagħla tal-Papa are unforgettable companions.

People are not too far behind in the way a few brush strokes capture their main physical, and more importantly, intellectual and emotional features. It is no surprise the Belgian cartoonist Mitteï was inspired to illustrate Daudet’s country folk and life so effectively.

The people we meet, and the animals that surround their ad­ventures, endeavours and misfortunes, are literary, if not literally, alive and kicking. Conflicting situations are particularly effective at bringing them to life, and ironies that lie in religious tensions are also used to humorous effect:

Lettres de mon moulin is a hymn to Provence and the Mediterranean, including that light that Albert Camus wrote so evocatively about in the early 20th century. It recalls as well as recreates traditions, ways of speaking and behaving, village life and general behaviour that belong to a bygone, as well as invented, era. Readers of the mid-to-late 19th century enjoyed this type of literature that allow­ed a mental escape as well as an inspiration to a real, or mythical, return to a slower, more charmful as well as charmed way of life, as opposed to the faster pace instilled by various trappings of the industrial revolution.

Readers today also enjoy heeding the call of the past, real or fictional. Reading 19th and early 20th century English literature in my University student days  op­posed bucolic and naturalistical portrayals by poets and writers like Thomas Hardy to the resolute industrial development led by technological changes of the time.

Daudet bemoans the industrialisation of bread making and the abandoning of traditional ways and folklore in food and culture, like the traditional wine (moskat) and dances (farandoli), in a way that foreshadows current nostalgic and economic revivals of traditional ways of life that are healthier as well as in demand.

One of my earliest experiences of reading French literature in Maltese goes back to Toni Aquilina’s translation of Camus L’Eté, a text that basks in the Algerian sun of Oran and the surrounding landscape. As with Aquilina, arguably the foremost accessible setter of standards for French literature writing in Maltese translation, as shown once again by his latest translation of Maupassant’s work, Pulè manages to develop his craft and transport Daudet’s mill, and its environs, from the 19th to the 21st century with an enthralling narrative that does justice to the original and meets the expectations of contemporary readers of international literature in translation. The stories by Daudet may be read for fun and to provide an escape from mundane, urban humdrum. But in doing so, they provide us with a healthy lifeline and an energetic propulsion into whatever the future may bring, allowing us to find strength and fortitude in the past while encouraging us to envision aesthetical and even poetic scenarios for our future.

I read Pulè’s translation while revisiting a French translation of Alberto Tabucchi’s Sostiene Pereira, which narrates the dusk of the musty, ageing journalist Pereira rediscovering a new élan in life at the crossroads of the nascent dictatorships in Portugal and Spain in the 1930s, formidably interpreted by Marcello Mastroianni in the 1995 film adaptation. Daudet is a favourite of Pereira, allowing him to recall the best days of his youthful life while studying, swimming and wooing his future wife at the university city of Coimbria. But the nostalgic element invigorates future action to be taken when faced by decadence, political insipidity and ensuing danger. Likewise, clear lessons for the present and  future may be gleaned from Pulè’s translation of what may be considered a very inspirational text, with added relevance and poignancy in today’s Maltese society run over by short-sited economic gain and less-than visionary social structures.

One thing I asked myself while preparing to write this review was where should the focus of the article lie: on Daudet or on Pulè’s Daudet? What has made answering this question very hard lies in one of the best things about this translation. In fact, it is what good translations should do: make the text their own, reduce the possibilities of deve­loping any jarring or irreconcilable differences while making the interpretation of the text a strong and special one.

I hope Pulè keeps entertaining  and challenging us through his translations, and the publisher keeps exploring new horizons and encouraging readers to en­gage with classic texts in Maltese to redisover their relevance to our lives. As the writer grows older, and the publisher wiser, may they keep age at bay, and stay young at heart and in spirit.