One of only three “almost complete” Renaissance altarpieces by artist Antonio de Saliba to survive anywhere in the world has been restored to its former glory, using 3D scanning of paintings for the first time in Malta.

On display in its home at the newly refurbished Mdina Cathedral Museum, the Triptych of the Madonna del Soccorso, dating back to the late 1490s, constitutes three of eight paintings by Sicilian artists Antonio de Saliba and Salvo d’Antonio in Maltese public collections. 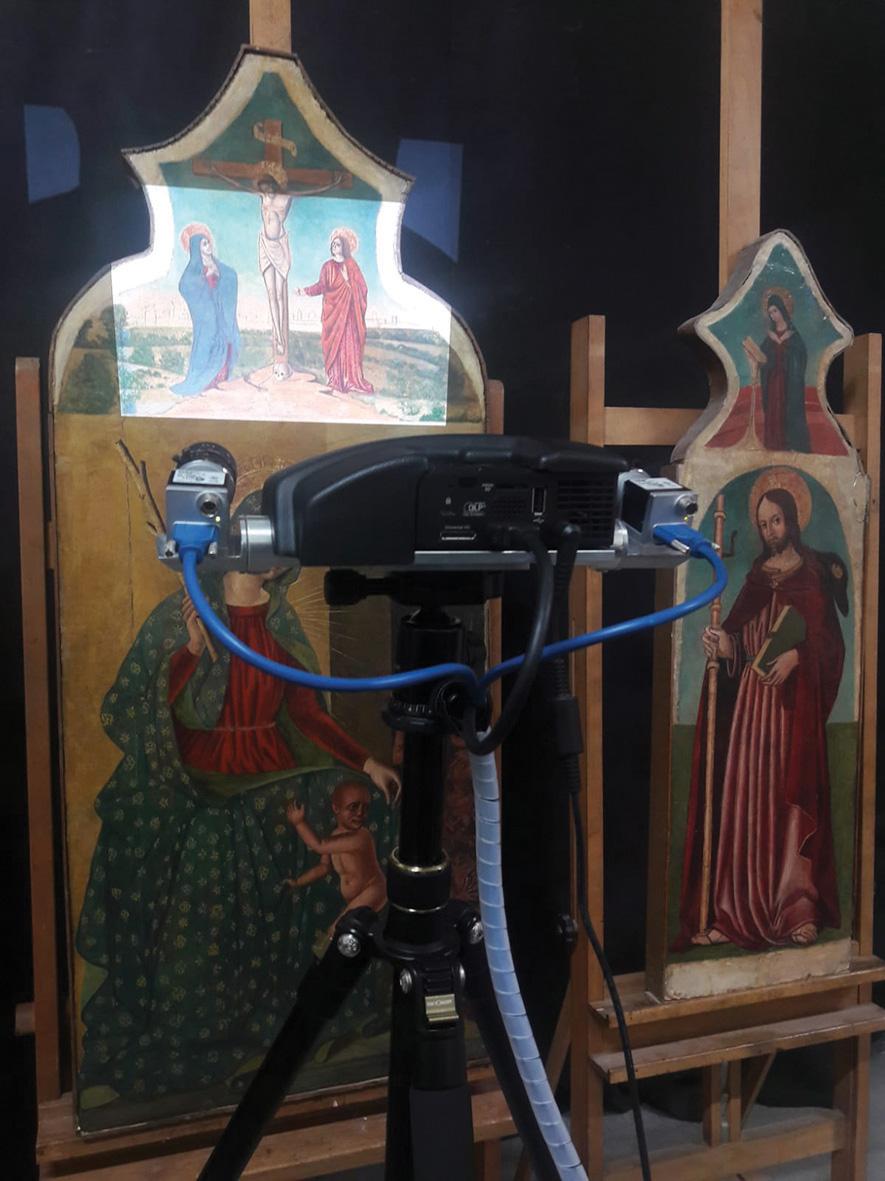 All their other known paintings are fragments from dismembered altarpieces, which have lost most of their components, said Charlene Vella, lecturer in the Department of Art and Art History at the University of Malta.

“The paintings are important because they all reached Malta before the arrival of the Knights of the Order of St John, indicating the sophisticated type of artistic patronage on the island pre-1530 that we often fail to acknowledge.”

Since 2010, Vella has overseen the conservation and restoration of seven 500-year-old Renaissance panel paintings in Maltese public collections, shedding light on their authorship and history.

The Sicilian artists were nephews of Antonello da Messina, the most important Renaissance painter, who mastered the oil technique better than his Italian contemporaries and effectively employed the innovative chiaroscuro  skill for dramatic effect well over a century before Caravaggio, Vella explained.

She is also the director of the university’s Late Medieval and Renaissance Art Studies research programme, which the Triptych of the Madonna del Soccorso 18-month project, funded by the University of Malta and sponsored by the Malta Airport Foundation, falls under.

The 3D scanning technique has been carried out locally on archaeological sites and on sculptural objets d’art, but this was the first painting to be assessed in this way.

The equipment was brought over from Italy, and Digitarca, which has produced several high-profile projects in 3D, was assigned the task, working hand in hand with Pierre Bugeja, whose team at Prevarti Ltd was in charge of the scientific investigations and the conservation-restoration process.

“These 3Ds prove that we should not see paintings as two-dimensional objects,” Vella continued, adding that the data will be available to the public in the same way several international museums have presented their scanned objects for free online, together with infrared, UV and X-ray images.

The paintings were first studied diagnostically and inspected under UV light, which revealed large sections of overpainted areas. Past interventions heavily intervened on the Virgin’s mantle, with the addition of completely reconstructed gilded floral and star motifs, as well as an uncharacteristic black outline to the figures. 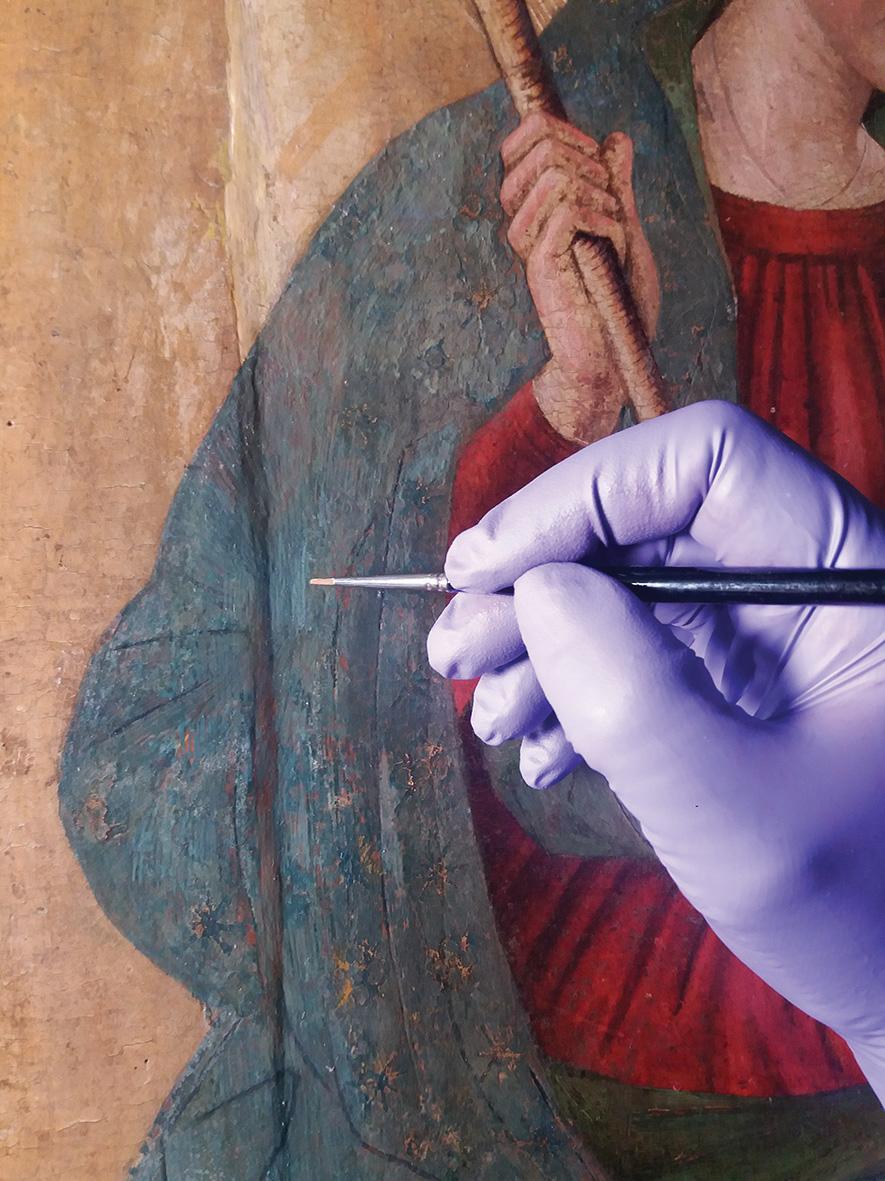 Final stages of the restoration.

Investigations also revealed that the limewood panels were badly deteriorated from woodworm infestation and surface deformations from previous restoration interventions, as well as cracks in the panels and paint due to the movement of the wooden planks over its five centuries of life.

The process of conserving the panels was “extremely delicate”, including a pre-consolidation phase and cleaning tests that eventually removed the yellowed, varnished and retouched painted sections, using solvents, and revealing the extent of the damage sustained.

Conservation scientist Davide Melica from the Consulenza e Diagnostica per il Restauro e la Conservazione was responsible for diagnostic research on the manufacturing technique of the paintings alongside Bugeja.

Once the lacunae were infilled, restorers and art historians could decide on the way forward to re-present the triptych for display at the Cathedral Museum.

“The plan was to give a clear indication of the artist’s original intention without intervening heavily on the final product as had occurred in the more recent interventions,” Vella said.

The triptych originally had an ornate gilded late-Gothic surround, and Vella is now working with architectural designer Carmel Spiteri on the ‘hypothetical’ reconstruction of the framework in the form of a frosted sticker placed onto the museum-quality glass that is protecting the painted panels.

“Since the original framework did not survive, the panels’ shape has been intensely studied to come up with as close to a hypothetical reconstruction of the framework as possible without being too daring in its recreation,” she explained. This has been presented to fellow art historians and curators from all over the world at the University of Cambridge.