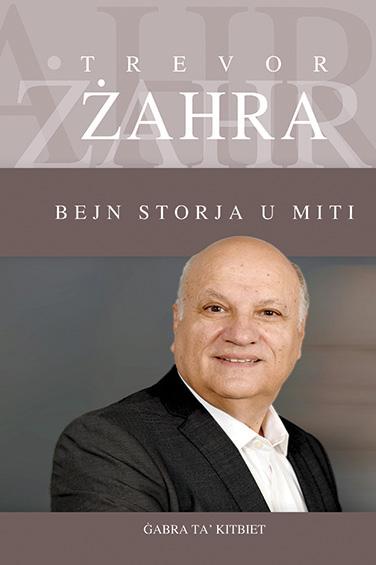 This well-sized, well-printed and generously illustrated volume is one of a series planned by Horizons. The subjects are Maltese authors who are of quality and also widely esteemed. Trevor Żahra is an author who easily fits both these characteristics.

He has written and still writes successfully for children, young adults and adults, works of fiction – novels, short stories, little children’s books – poetry and works for the theatre, and works of non-fiction, the most important of which are his autobiographical and moving Stella, Jien u Hu and Il-Ġenn li jżommni f’sikkti.

This extraordinarily versatile and prolific man is also an artist of merit and has illustrated a good number of his own publications. Ġorġ Mallia writes perspicaciously in the present volume on Żahra as an innovative illustrator.

The volume includes essays, one or two a few pages long, and the longest, quite a few, much longer, the authors being literary critics or historians, and personal friends of Żahra’s.

The editor, Sergio Grech, provides an introductory long chapter of reflections, very readable and also biographically informative, that provides the reader, whether it is one very familiar with Żahra’s works or a relative newcomer, with a good context for what the many other authors say about the author as the lively and bright man that he is, and as one of the most prolific and able authors Malta has ever produced.

He was lucky in having as his father the intelligent Walter Żahra, trade unionist, at one time a printer, and also an author; so he grew up in a household where reading and also writing were important. Writing has been a need for Trevor since when he was still at secondary school, where he wrote the first instalments of what was to become in time his well-known children’s book, Il-Praspar ta’ Kunċett u Marinton, which were good enough to be read on television at the time.

I suspect this volume ranks with Trevor Żahra’s best works

When he left school, he was sufficiently well-thought of as a writer as to be  employed by the local television as a scriptwriter, then he decided to be a  teacher. He soon began to publish a series of adventure books for children, the first of them Il-Pulena tad-Deheb, influenced by Enid Blyton.

Żahra has never liked to do the same kind of thing for long , and though he has gone on writing more books for children all these years, certainly not Blytonish any more, he tried his hand at writing adult novels, such as Taħt il-Weraq tal-Palm, or Is-Surmast, a novel about a strongly characterised headmaster, which much later was to signally succeed in dramatised form, at Teatru Manoel, where it drew large audiences, and was to be restaged a few years later.

The academic reader will no doubt be interested in Manuel J. Ellul’s chapter in the present book on the comic in this novel as seen from the viewpoint of Henri Bergson on the nature of laughter.

There is not much in this volume about Żahra’s early interest in magical realism, as in Ħdejn in Nixxiegħa, allied with his love of the traditional Maltese folk tale, a love that led to his long 1994 work Is-Seba’ Tronġiet Mewwija, not one of his widely-read works.

In Provenz, a volume of short stories, one or two influenced by Edgar Allan Poe, he makes clear his fascination with what in my review of this book I called “the symbiosis of facts and fancy of which all our lives consist”. I found tales like Ir-Riħ li jokrob waħdu and Ħġieġ quite fascinating. I suspect this volume ranks with Trevor Żahra’s best works, though another volume of short stories, Sepja, is a close runner-up.

We learn that as a young man, Żahra was keen on theatre and acting, a keenness that was to produce from him in maturity a number of plays, one already mentioned in this review. Marco Galea has written very soundly on Żahra’s theatre works, providing interesting analyses of the relationship between plays like Is-Surmast and the fiction of which they are dramatisations.

Galea shares my enthusiasm for Is-Surmast and writes interestingly and at some length on another play, Ħanut tal-Ħelu and of the dramatisation of Il-Ħajja Sigrieta tan-Nanna Ġenoveffa. On Żahra’s commercially successful but dramatically less interesting and exceedingly coarse Minn wara ż-Żipp, a male retort to the notorious The Vagina Monologues by Eve Ensler, he writes briefly and uncommittingly.

Żahra has always been a champion for the writing and reading of literature in Maltese. Joseph P. Borg provides a long essay on his activities in  bodies advancing this field bearing the title Bejn Ġenna(ta) u Oħra (a title having a witty reference to Żahra’s splendidly autobiographical work Il-Ġenn li jżommni f’sikkti).

Readers will enjoy the essays by friends like Adrian Buckle, Ray Calleja, Simone Spiteri (an ex-pupil who has achieved fame in the theatre), Toni Sant and others. Another long-standing fan of Żahra’s writings, Kristina Quintano, who is a half-Norwegian journalist and author, will interest many readers with her essay on her translation of Żahra’s Il-Ħajja Sigrieta tan-Nanna Ġenoveffa into Norwegian.