GABRIEL BUTTIGIEG speaks with Melita Cameron-Wood about his current exhibition The Four Seasons.

As spring descends upon us, the change of the seasons seems like a fitting point of the year for the opening of The Four Seasons, an exhibition presented by visual artist Gabriel Buttigieg and curator Justine Balzan Demajo.

Rather like a bridge, the crossing from one season to another invites reflection, as we, both as individuals and as a collective, have an opportunity to observe life from a vantage point of remembrance and anticipation. Standing on the seasonal bridge, anchored in a state of suspense and flux, the journey is familiar, but it brings with it the refreshing uniqueness of the moment ‘now’.

Through his exhibition, Buttigieg brings us closer to this moment, triggering a state of mindfulness and appreciation that is achieved through the recognition of the complex wonders of life, with all its limitations, drives, patterns and ancestral trajectories. With tapestry-like precision, Buttigieg’s paintings tell a story that focuses on the minutiae that contribute to the human experience, combining references to Tarot cards, ancient symbols, psychology, Eastern religions, Catholicism and mythology. 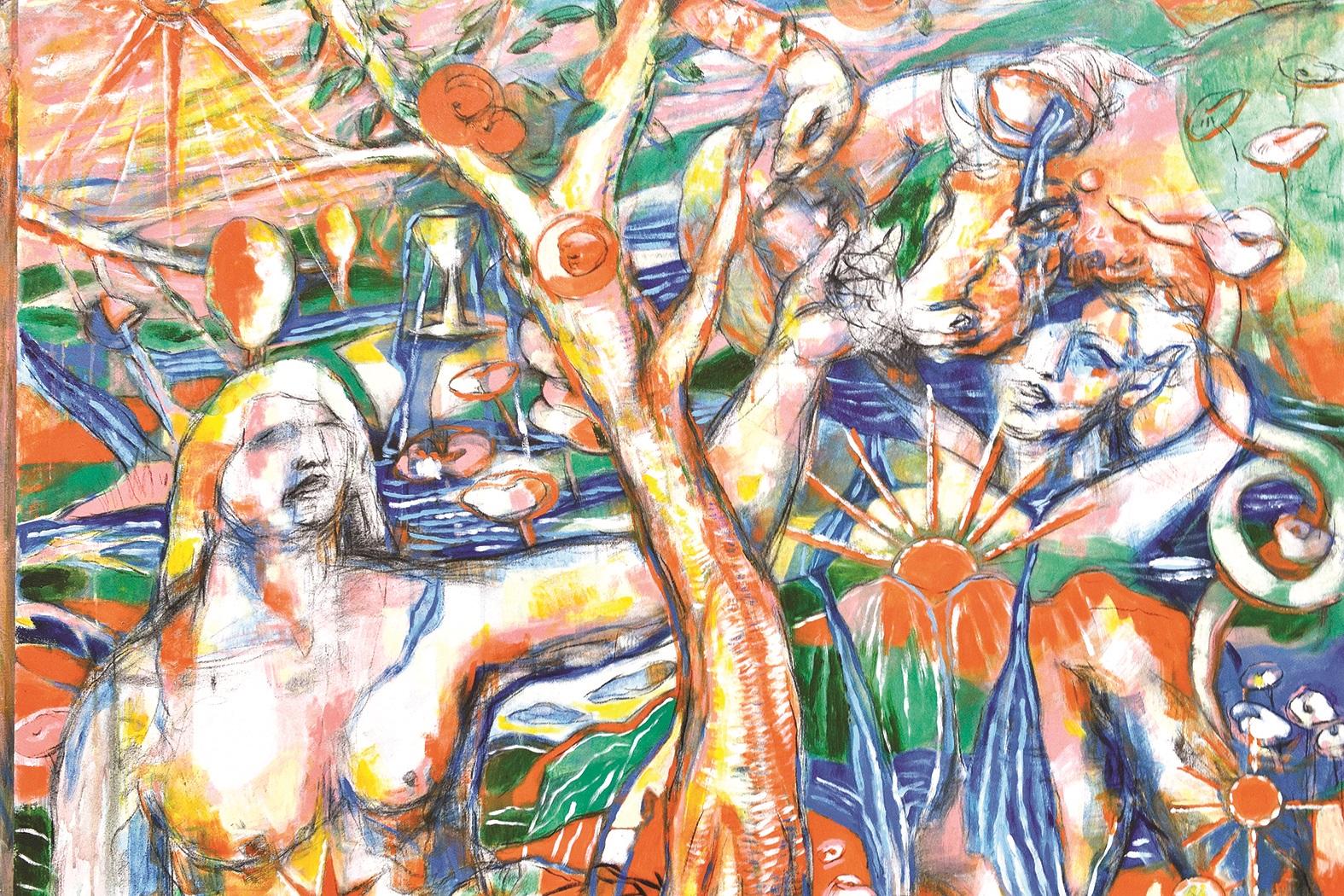 Detail from Spring (On the Ace of Cups and Questions Related to Love), by Buttigieg.

“In these paintings, I wanted to do an excavation of all these layers and different symbols,” Buttigieg explains.

“The symbols are never-ending. The sun and the moon are the most obvious ones because I wanted to create this sense of a cycle, but there are other symbols like conches, swans, crows. Conches are a representation of the breast, for example. Then you have the goat, and then you have Pan. Then suddenly you see the Madonna, Mary Magdalen, and then a witch.

“Literally everything we see in life has a history, even something as simple as a bottle of wine – it goes back to the Egyptians, to the Romans, to us being primal and discovering that once grapes are fermented, they give us a boost.”

This sense of history, and the acknowledgement of the fact that we are constantly building upon what has come before us, can also be felt in the mysteriously haunting space that Buttigieg and Balzan Demajo selected for the exhibition – a baroque venue that can be found at 38, East Street, Valletta. 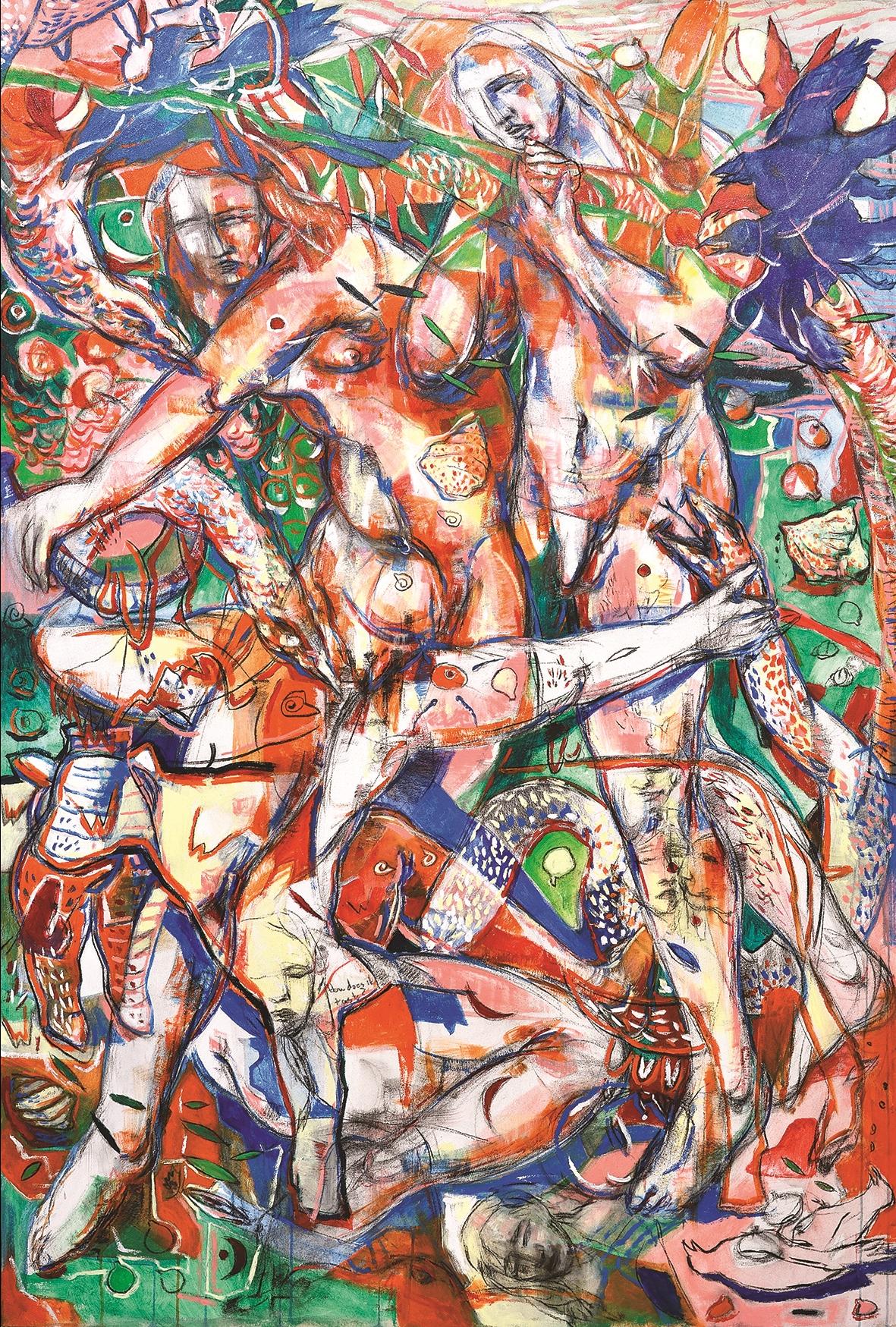 Autumn (On Crows, Swans, Moons and Conches), by Buttigieg.

“I’m much more inclined to applied painting – using painting as a language to create this immersive experience. So I wanted this space in Valletta that has never been used before. It’s very dark, very baroque, with high arches and mould on the walls. The space invites you to be with yourself and reflect on your own experience.”

The four seasons are a metaphor of the cycle of life

The space gives visitors a sense of the rich history and wealth of human narratives that have preceded the present moment, offering the perfect backdrop for the exploration of the exhibition’s age-old subject matter.

The four paintings, Spring (On the Ace of Cups and Questions Related to Love), Summer (On the Tower and Pan Copulating with a Goat), Autumn (On Crows, Swans, Moons and Conches) and Winter (After Luke Hannam’s The Thinker and Psyche’s Revival), will be shown alongside a skilfully produced video installation entitled Mother Mundane by Sarah Chircop. 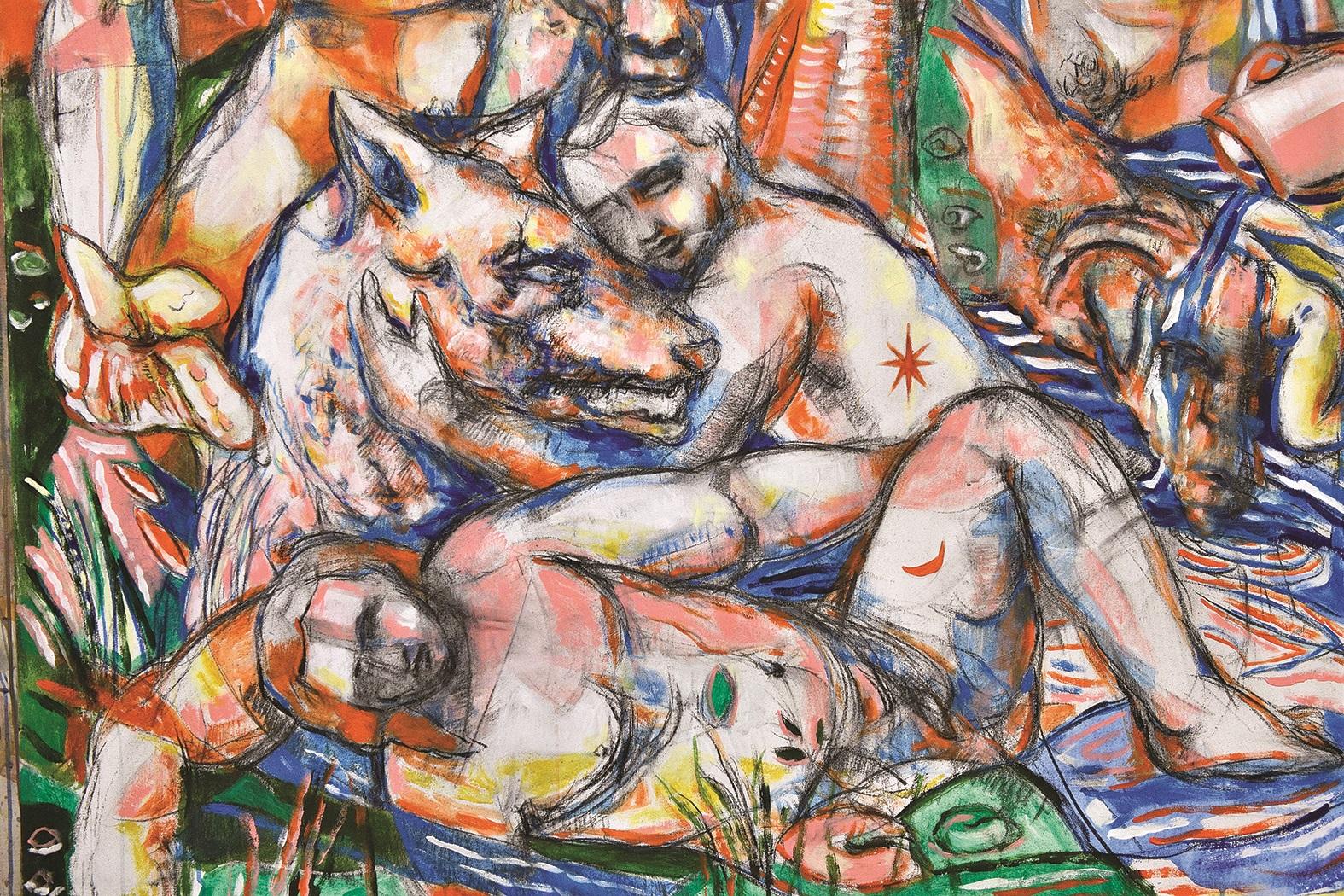 Detail from Spring (On the Ace of Cups and Questions Related to Love), by Buttigieg.

“For me, the four seasons are this metaphor of the cycle of life,” Buttigieg explains.

“You know, it’s about being born, growing old, being in solitude, being in relationships, dying, facing insecurities and vulnerabilities. There are lots of feelings to deal with. The four seasons have been depicted since the beginning of time.

“Even to this day, we see people like David Hockney interpreting the four seasons. They are in the Renaissance, in music, in theatre. Throughout the ages, I saw all these symbols, narratives and depictions, which somehow capture this essence of the human condition, be it archetypal, symbolic or through paintings.

“It was a conscious and unconscious process, where I literally wanted to appropriate everything that I’ve observed and that I’ve heard. And even though it came from a personal place, I still wanted it to be this universal picture so that people can relate to it.”

By connecting personal and universal storylines, the exhibition encourages visitors to play with the notions of interpersonal perception, external presentation and inner worlds, all of which shape the human experience.

The dichotomy between people’s internal and external narratives can be seen in the way in which the initial splendour of the works gives way to the tenderness and ultimate vulnerability of the individuals and creatures depicted.

The multitude of layers present in Buttigieg’s work appeals to visitors to embark upon a journey of self-discovery, whereby they can explore where the seasons have fallen in their own lives up until this point. 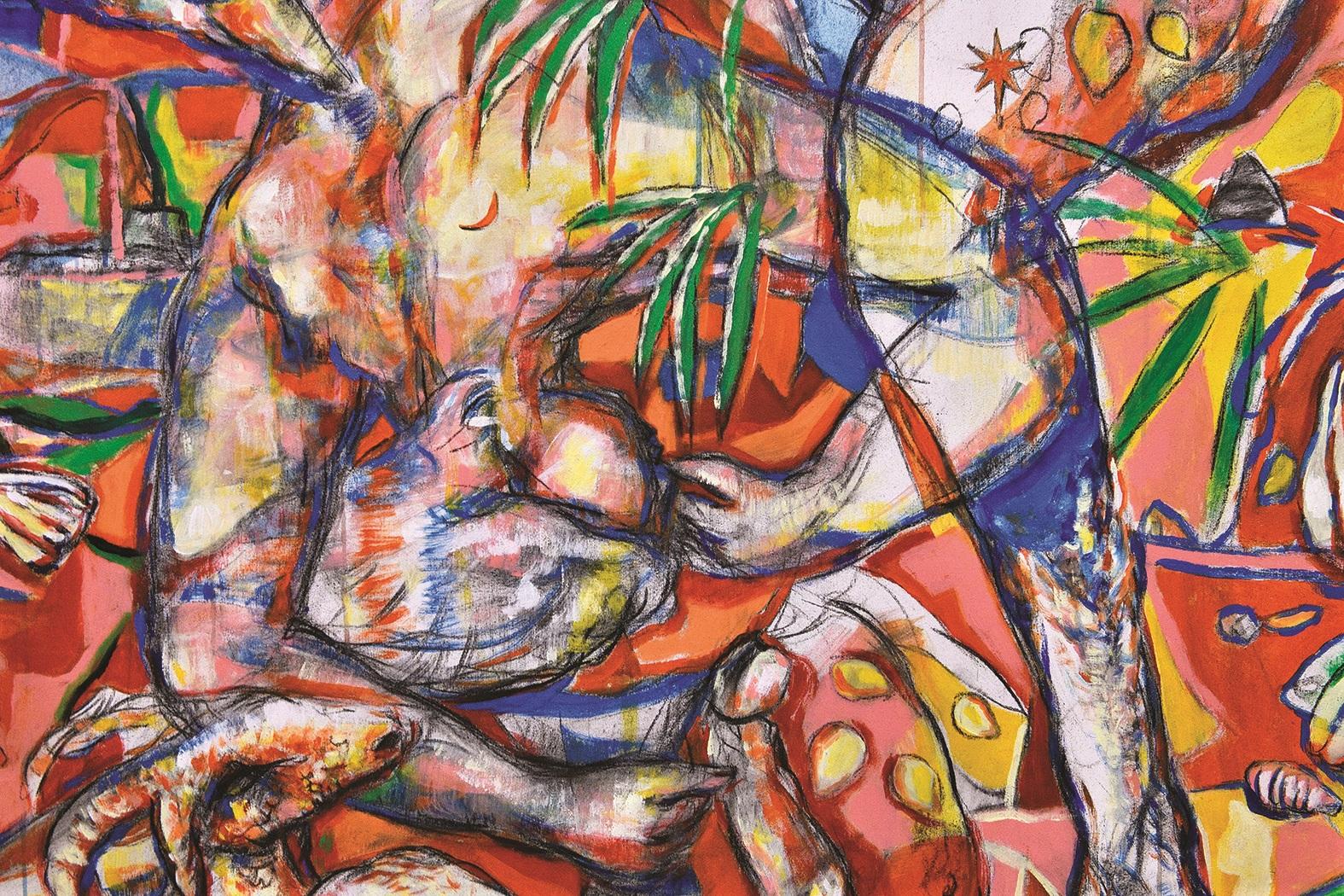 Detail from Summer (On the Tower and Pan Copulating with a Goat), by Buttigieg.

“Some people associate summer with being a teenager,” Buttigieg says. “But for some people, adolescence might be really difficult. I wanted to challenge these concepts. And even though my work might be vibrant in colour, the underbelly is always very dark.”

Visitors to the exhibition are invited to immerse themselves in this multi-sensory experience, which will allow them to understand the way in which the seasons resonate with them on a personal level, and ultimately how these four recurring companions can help us to gain more insight into the human condition.

The Four Seasons will run from April 8 to 23 at 38, East Street, Valletta.