Artistic legacy of the house

Luigi Apap’s ambition was to turn his house into a noble home. For this purpose his choice fell on two of the foremost artists working in Malta at the time – the Italian painters Attilio Palombi (1860-1913) and Filippo Fortunato Venuti (flourished 1885-1906), who covered the first floor with their artistic prowess. They are still all extant. 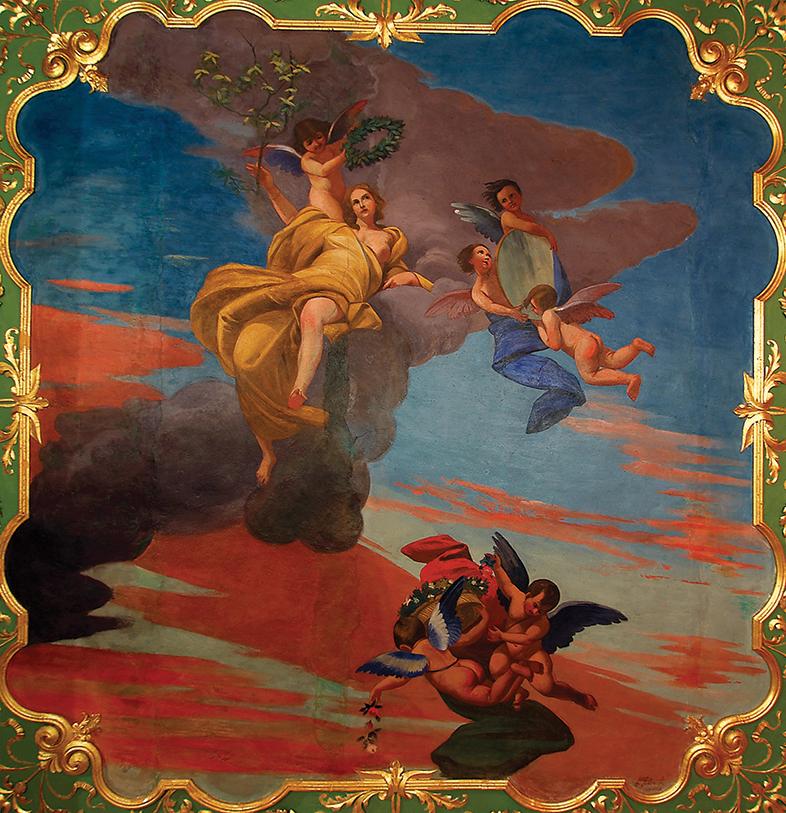 Detail of the first panel covering the ceiling of the large room on the first floor painted in oil by Attilio Palombi.

Attilio Palombi was born in Rome in 1860. He was a pupil of the fresco painter Cesare Mariani (1826-1901). He was in Malta in 1887 and it is recorded that he left for Naples on June 2 of that year aboard the ship Ville d’Oran. In 1891, he completed in Rome a painting of the shipwreck of St Paul for the Sisters of St Joseph of the Apparition in Malta.

He was commissioned to paint the vast ceiling decorations in the collegiate church of St Paul’s Shipwreck in Valletta, for which purpose he came to Malta on June 23, 1901. The present author has in his collection the bozzetti of two of these paintings, dated 1901, which were reproduced in Treasures of Malta. Another four bozzetti from the estate of Dr Enrico Borg Olivier were sold by auction in 1957 and the Maltese government unsuccessfully tried to exercise the right of preference under the Antiquities (Protection) Ordinance. 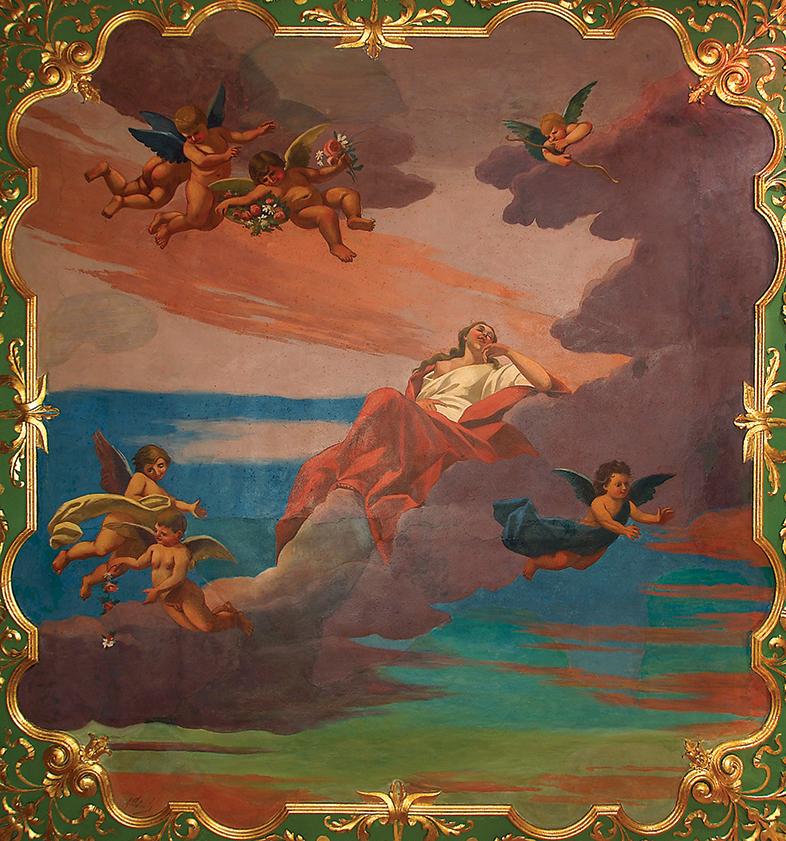 Detail of the second panel covering the ceiling of the large room on the first floor painted in oil by Palombi. Photos: Peter Bartolo Parnis

Apart from his work in churches, Palombi was also a portrait painter. On January 14, 1907, his oil portrait of Judge Alessandro Chapelle, fourth Baron of San Giovanni, was exhibited at the Bibliotheca in Valletta; it was painted the year before.

The large room on the first floor of the house was painted by him.

A picture of the room was carried in the first part of this article last Sunday.

Filippo Fortunato Venuti was born into a distinguished family from Cortona whose records go back to the 11th century. In 1799, the renowned painter Domenico Venuti, Filippo’s great-grandfather, settled in Rome, where Filippo, son of Rodolfo, was born in the second half of the 19th century. The prolific painter Francesco Grandi (1831-91) took him under his wing, considered him his best pupil and sought his help. On his own, he received commissions from the Pope, as well as from new churches being built in the US. 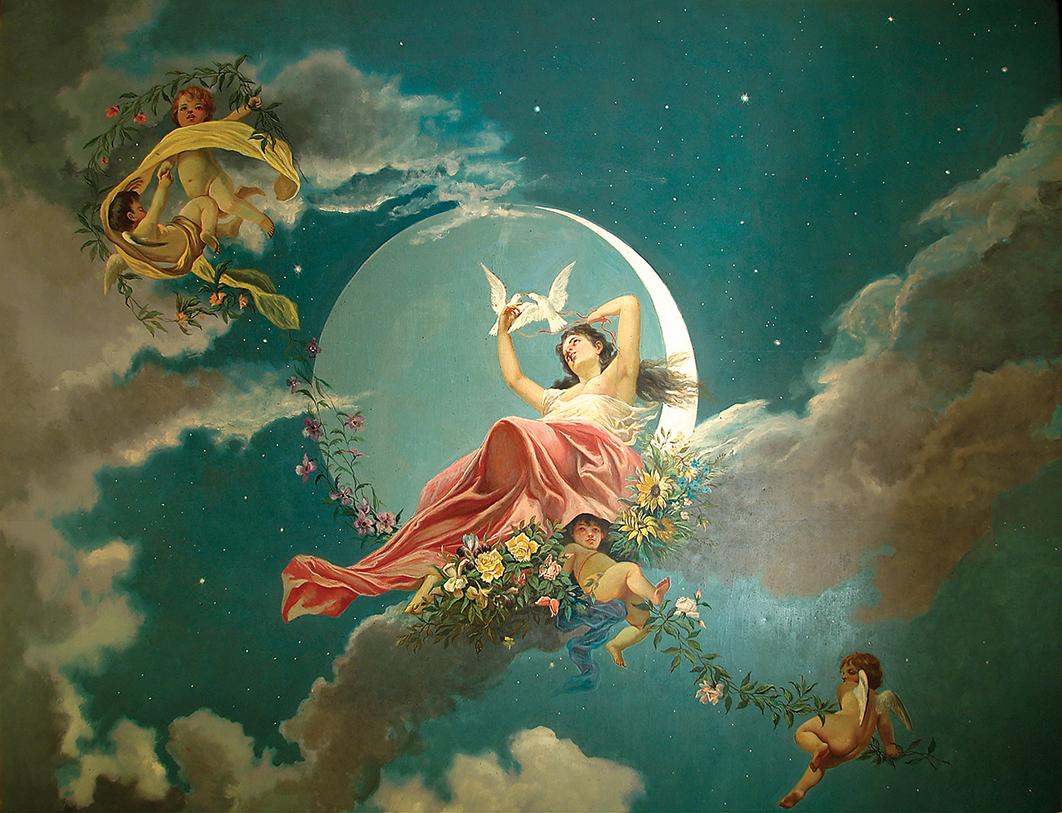 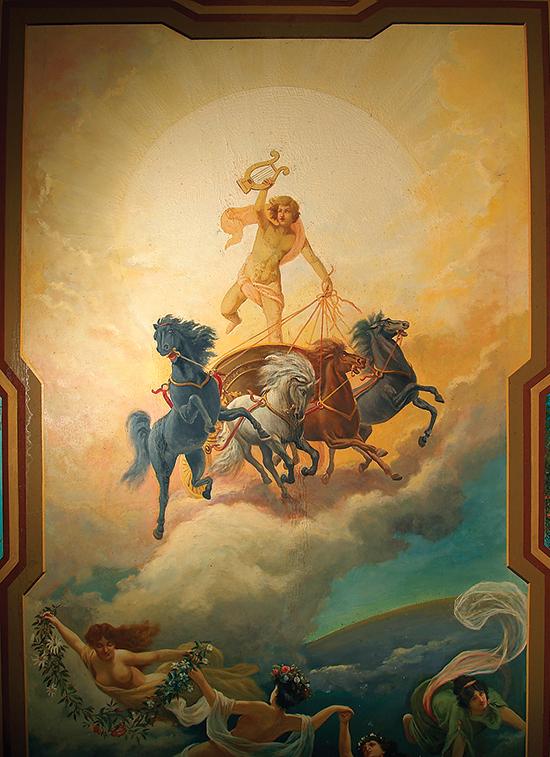 An early Maltese commission was probably the dome decorations, executed in 1885, in the chapel of the Good Counsel belonging to the Testaferrata family at Żejtun, named Aedes Danielis. In 1894, he executed a portrait of Saverina Bartoli Galea.

In 1897, he painted his masterpiece, the altarpiece of the Assumption for the parish church of Mqabba, and several other churches listed in 2006 by Fr Jonathan Farrugia. He exhibited his paintings at the Malta Art Galleries, and in May 1899, he exhibited at the Malta Permanent Exhibition in Valletta.

At the turn of the century, Venuti was commissioned by Marquis Giuseppe Scicluna to decorate Palazzo Parisio, Naxxar, with a series of painted murals that were finished by the end of 1904. It seems that it was then that he started working for Apap at his house in Strada Vescovo, Valletta.

He painted and decorated all the ceilings and friezes on the first floor of the house, one of which is dated 1906. At the end of 1904, he was advertising, under the title of professor, that at his studio at 49, Strada Nuova, Sliema, he was giving lessons in “oil and watercolour painting”. He could also accept orders for portraits to be executed punctually at a moderate charge.

It was probably before 1904 that his studio was at Strada Annunziata. In 1897, he was awarded a bronze medal at the art competition organised by the Malta Society of Arts, Manufactures and Commerce.

The largest room in the house, the drawing room, is in the piano nobile, with a wide balcony overlooking Archbishop Street. The whole canvas stretching along the ceiling was painted by an unknown artist in what one could perhaps say is in the style of Watteau. Unfortunately it has no signature, unless it was erased when rainwater seeped through the ceiling from the roof in the years before 1985, in which year the present author set up his legal office at the premises under a lease agreement together with Dr Austin Sammut. The paintings were restored to their pristine state. We did our best to look after the treasures therein. 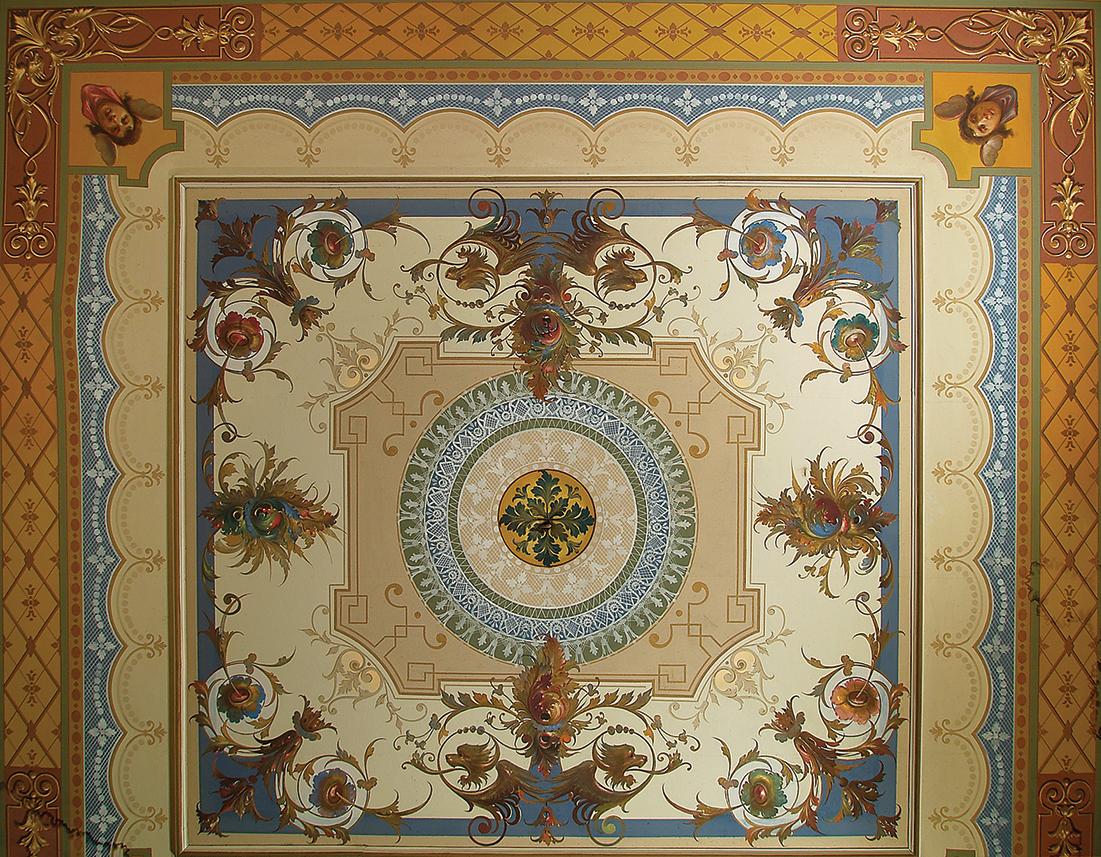 The marriage of Rosa and Luigi Apap was childless. So they decided to adopt Rosa’s niece Emma Contini, daughter of Elisabetta Cicolari, wife of Gaspare Contini, who married professor Carlo Mallia on October 30, 1923. The marriage was celebrated at the private chapel in Villa Rosa, St Julian’s, followed by a reception. They had three children – Roberto, Rosa Maria and Anna Maria. My family became very friendly with the latter and I grasped the opportunity to garner some information on Luigi Apap, which I found very interesting and quite intriguing. 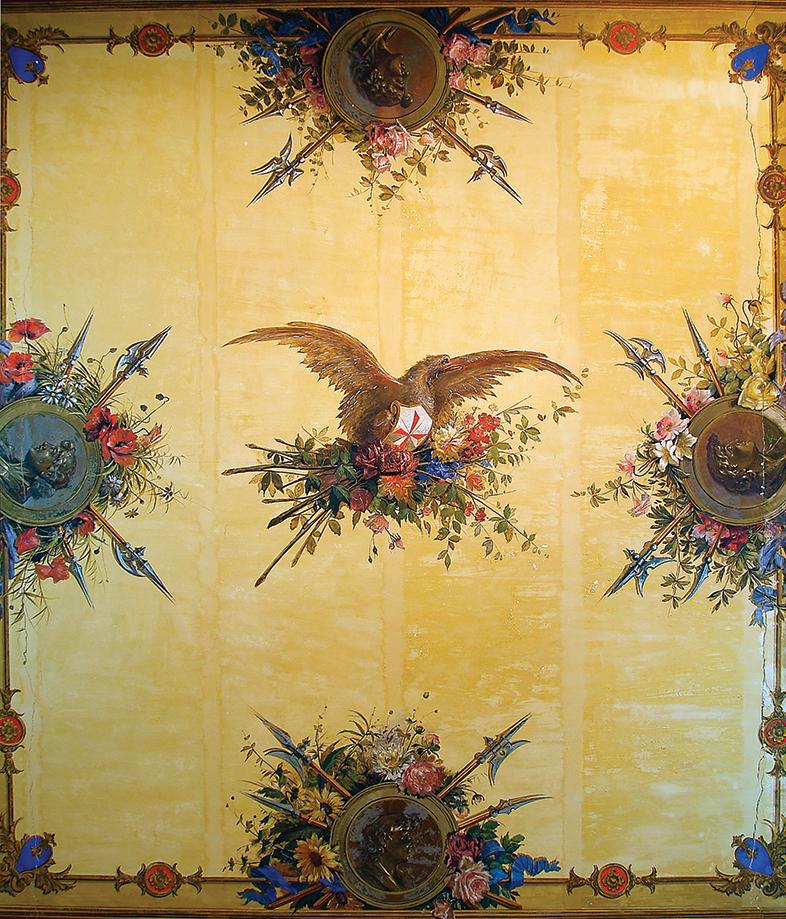 He came from a rich family, and at a young age, he went to England where he struck up a relationship with a British girl, which however, did not last long. Back in Malta, he built a flourishing business, chiefly as a grain importer. He used to say that there were people richer than him but he knew how to enjoy life.

He was extremely fond of animals, which he enjoyed mostly at Villa Rosa, where he kept a large number of birds. He had six dogs, cats, peacocks, a chimpanzee called Giego, and cows to drink his own fresh milk.

He employed a man to look after his six horses and who lived on top of their stables. Every day, he used to stroke them with a white glove, and he was in great trouble if Apap found them dusty.

His love of animals became a cult. When his borzoi dog named Linda died, he buried her in his garden and he composed these verses:

Besides, he built a sculpture as a monument to Linda. When Giego (or Diego) died, he organised a funeral to have him buried in the sea accompanied in boats by soldiers from the barracks nearby.

When his parrot was dying, he gave him to a certain Luigi as he could not watch him die.  He once said: “I cannot honestly say whether I loved most women or horses”. Was it a reflection of a disappointed life with the fair sex?

Concluded. Part 1 was published on November 15.

I owe a debt of gratitude to Joseph Schirò and William Zammit for their valid help in the production of this article and to Peter Bartolo Parnis for the photography.