Environmental concerns and humanity are the underlying concepts that govern the oeuvre of Roderick Camilleri. He discusses with Joseph Agius the environmental issues tackled through his series of reliefs An Unlikely Crown. 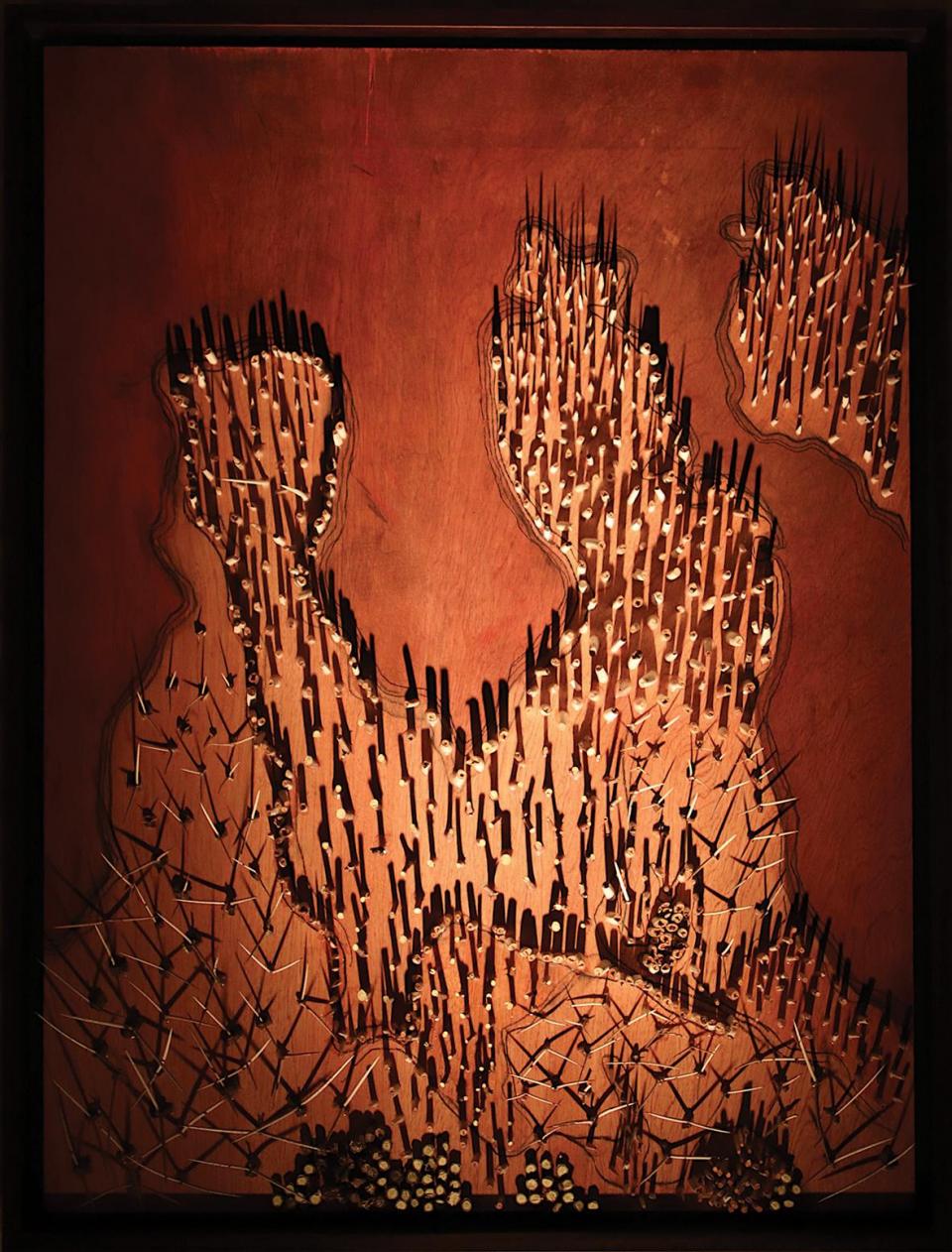 For artist and curator Roderick Camilleri, every aspect of his work, be it artistic or curatorial, needs to come together as an organic whole; concepts and their visual counterpart are equally important factors in the equation.

From a very young age, Camilleri showed a passion for art, which together with philosophy eventually became his academic areas of study. This explains the philosophical and conceptual nature that permeates Camilleri’s work. He weaves ideas from various sources into an underlying concept that is developed into a project.

Camilleri realises the importance of a disciplined approach, reflected in his graphic work, which shows a mastery in the different techniques. His studies at the Royal Academy of Arts (London) and Slade University (London), following those at the University of Malta, have matured him both as a foremost curator and as an investigative artist.

“I firmly believe that the artist has to search in order to create. What I create reflects my personal interests.  Mankind and the environment are my two main ontological concerns,” says Camilleri. Bringing together the two themes has produced a body of work in which the artist delves into the nature of dialectics; subject and object are integrated as a work of art that is a factor of both. He investigates the relation between perception, conception and expression, inspired by the world around him.

His series of three-dimensional reliefs, An Unlikely Crown, delves into the history a non-indigenous species of flora, introduced in the Maltese islands back in the 15th century.  The sweet thorn (Acacia Karro) is an invasive species that has impacted the floral spectrum of our country.

It is a very hardy plant which flourishes in South Africa, Angola, Zambia, Malawi and Mozambique as well as in Australia. It can withstand droughts, frost and extreme conditions while its thorns protect it from herbivores. Nothing short of drastic human intervention can control its ecosystem. 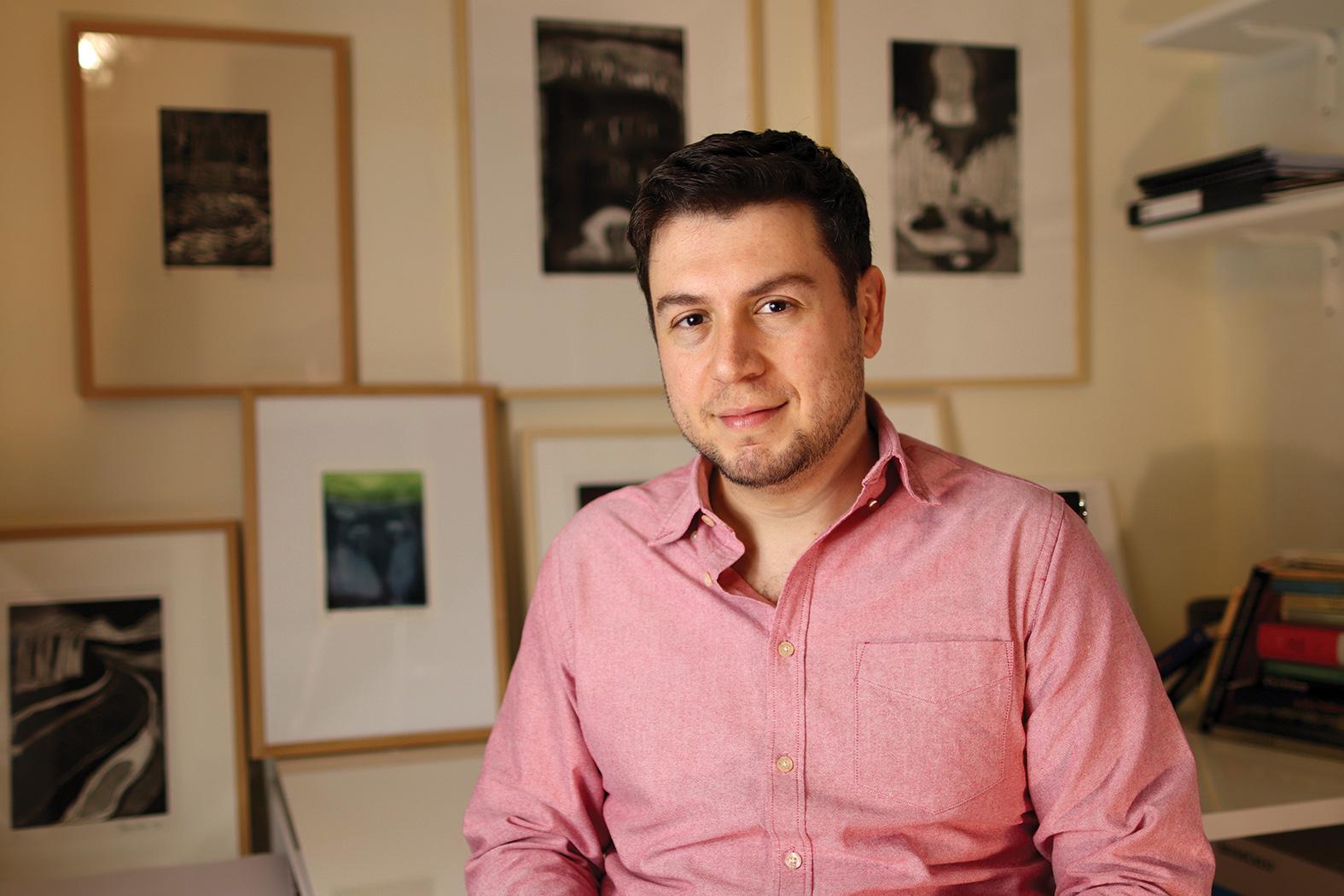 Camilleri searches for these trees all over our islands, harvesting their thorns as found objects that he uses as compositional elements. This series was meant to be exhibited as an installation during the APS Mdina Cathedral Contemporary Art Biennale 2020, but COVID-19 somewhat curtailed the artist’s plans. 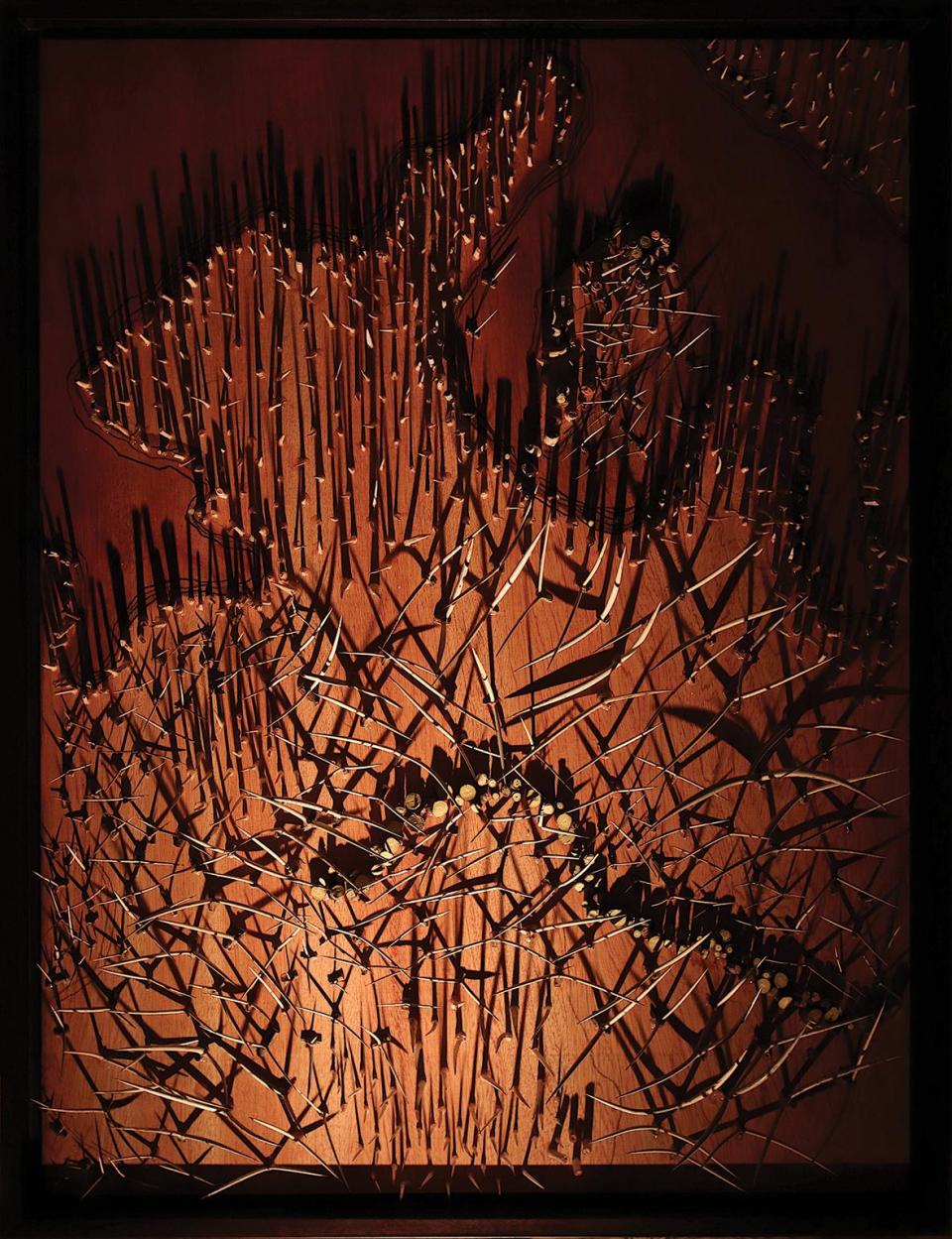 An Unlikely Crown is an ontological criticism regarding the invasion of modernist and brutalist architecture that, in the last few years, has sprouted all over, invading our towns, villages and countryside while destroying the ecosystems of whole communities. It is Land Art transposed onto wood panels. The distribution of elements evokes Günther Uecker’s ‘nail fields’ which display characteristics more akin to sculpture than painting. The play of light and shadows is similar to that in Camilleri’s reliefs.

“The aerial views of geographical locations that have become over­developed and that have been ravaged almost beyond recognition are represented in these compositions. These are reliefs, abstract and representational at the same time, another duality that intrigues me,” Camilleri explains.

One is casually reminded of some of Matteo Perez d’Aleccio’s Siege of Malta paintings in which aerial maps of locations in Malta serve as a backdrop for the depictions of the attempts at invasion by the Ottoman navy.

Camilleri’s unorthodox compositions can be acknowledged as a redefinition of the genre; the artist is not interested in the atmosphere, nuance and beauty that factor in a pastoral landscape or the behaviour of the community amid the architectural fabric of villages and towns. 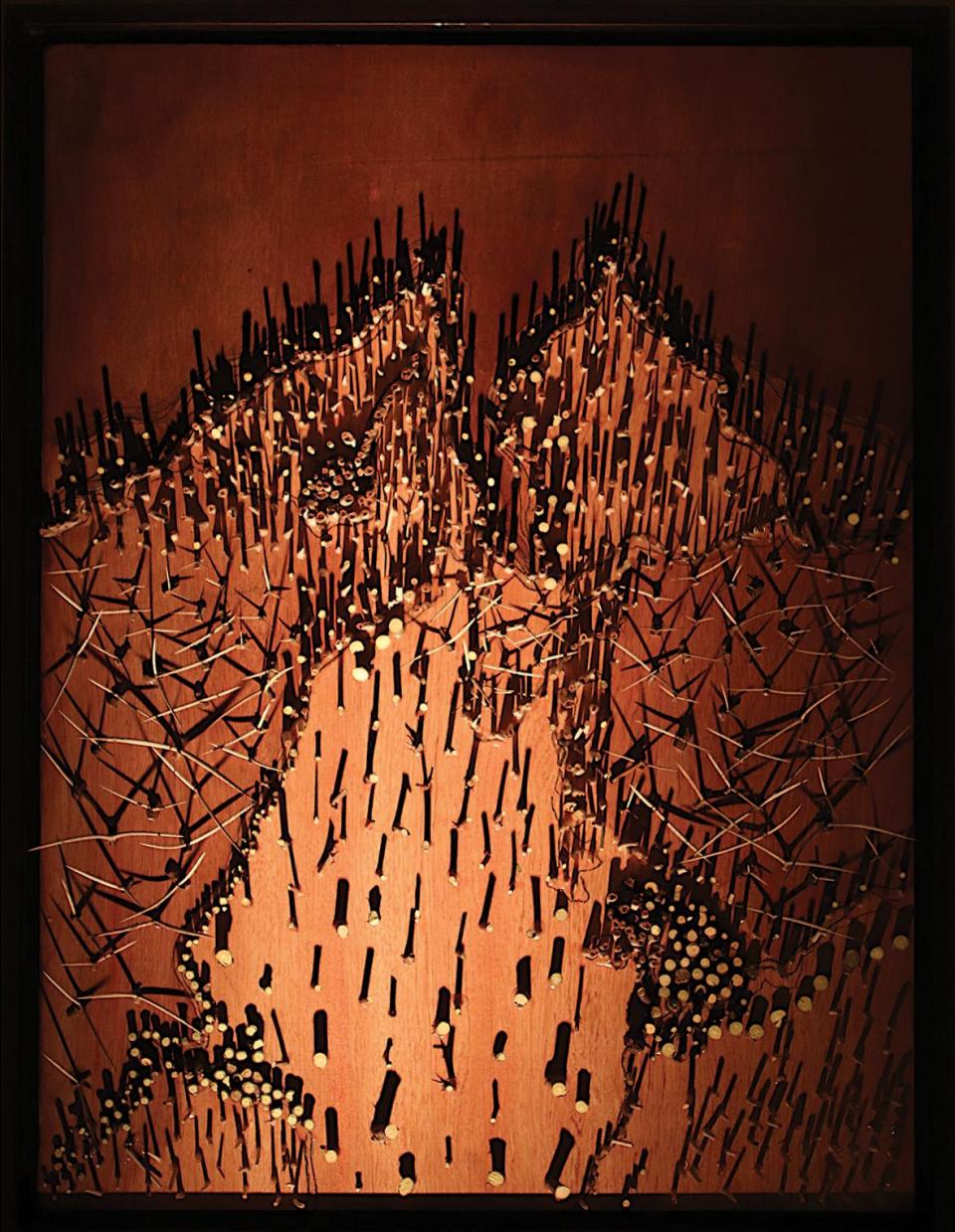 Paul Nash’s representations of a blitzed British countryside in the wake of World War II share the same devastating man-made sorrow. The cemeteries amid the barren poisoned terrain of lifeless tree stumps have replaced the natural beauty of the monumental flourishing trees of Nash’s previous landscapes – a mere memory a lifetime away. The spoils of war’s existential loneliness drains out the colour and joy of living. Barely a husk of hope remains.

Camilleri adds another layer of meaning to the series as it also refers to the passion of Jesus Christ. The unscrupulous Roman thugs mockingly shoved a crown of thorns on Christ’s head, a sacrificial lamb at the mercy of the insensitive representatives of the in­vasive Roman Empire. The bullying construction industry sacrifices our country’s endemic fabric on the fake altar of progress.

This myopic viewpoint that progress trumps all else, is shoved down our throat to justify the pillage of anything that was traditionally held as sacred. Like in the old tale of Sleeping Beauty, a forest, in this case of thorns, is overwhelming us and slowly suffocating our way of life through an invasion of sorts – one of high-rises and towering cranes.

Camilleri emphatically demonstrates his attachment to environment-related values through his choice of materials used in his art. “I’m working with an organic found objects in this series. In general, I try to work with environmentally friendly materials and thus limit the carbon footprint across my oeuvre.”

Carbon offsetting is a basic principle that governs every aspect of his artistic expression. He recycles paper through various processes and intends to produce artistic material from organic base products that he would use for his graphic work.  This respecting and caring for our planet at the most fundamental level is of pedagogical relevance, as Camilleri is an educator as well. 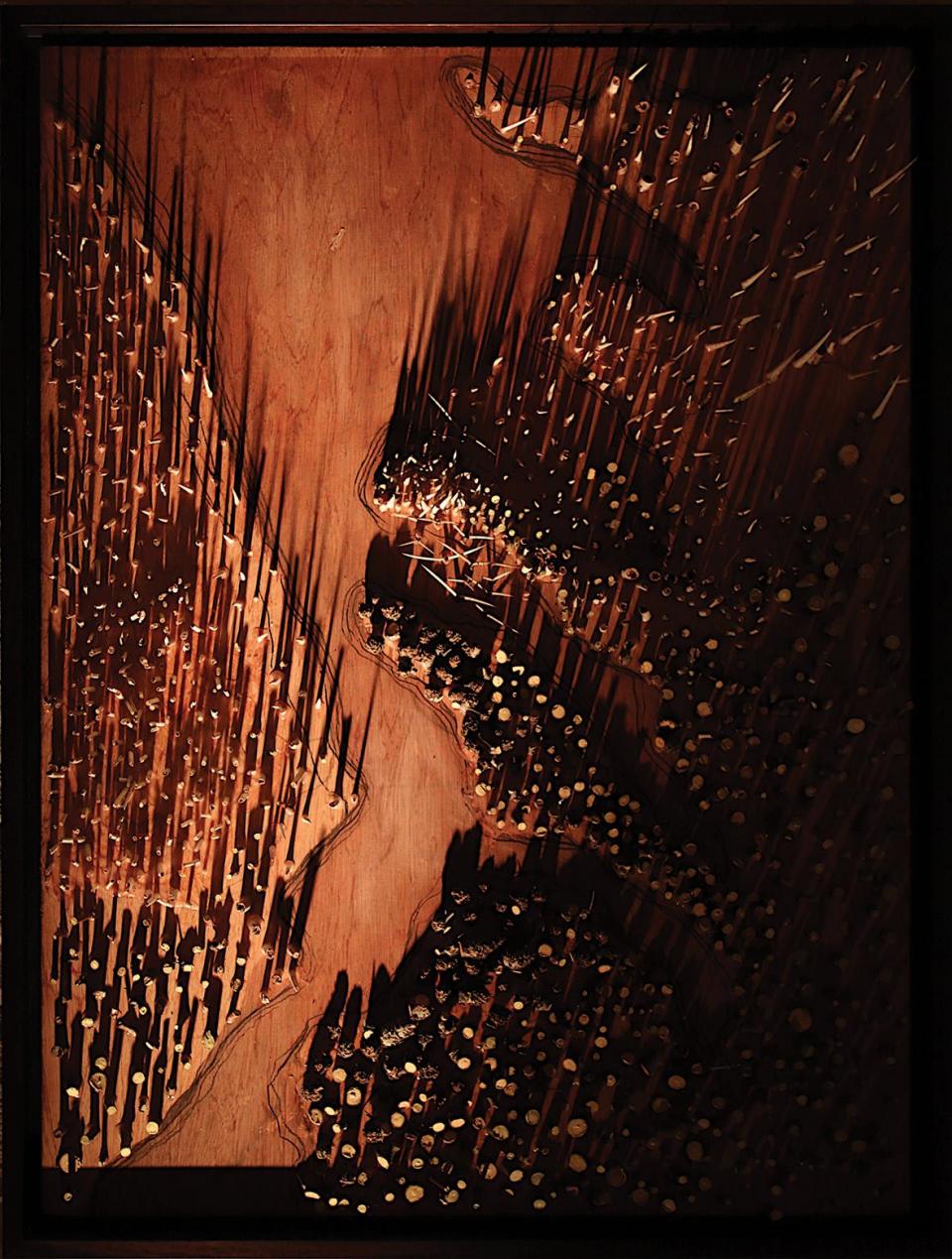 “I work on multidisciplinary and interdisciplinary levels. For me, the visual is as vital as the concept. The former has to be strong to carry an effective message, therefore I favour a holistic approach in which everything comes together,” Camilleri remarks.

“I use this perspective in my role as a curator too. The challenge is to evaluate the artist’s work while respecting his or her individuality, by not denaturing the work by not being too ‘invasive’. The creative aspect of the curating adorns the exhibition with yet another layer – the curator’s vision. I find curating to be a learning experience as ideas are shared, thus bringing everything into an organic whole. I feel that this helps a lot towards the success of the exhibition.”

Camilleri concludes: “My work is like a glass half full – not all is a catastrophe. I believe that mankind can somehow be redeemed. My art is not about the end of times.” An Unlikely Crown, however, is a wake-up call from our collective nimbyism to save what is still not torn apart.