An ancient quarry possibly dating back to the Punic and Roman periods was unearthed by workers on the site of the new Gozo Museum in Victoria.

The find is being viewed as a unique and extremely intriguing one for Gozo.

“Given the size and characteristics of the location, this is a first for Gozo,” a source close to the venture said.

“The excitement is high, considering that such a rare historic asset has been discovered in the heart of Gozo’s capital.”

The site of the planned museum is the defunct Ninu Cremona Boys Secondary School in Republic Street.

Last Christmas Eve, the Gozo Museum announced on its Facebook Page that “The ex-Lyceum site has surprised us with the discovery of a Roman quarry! Stay tuned in 2019 for more updates.”

The source said: “From a preliminary look, the quarry seems to be quite extensive, stretching underneath the old school.”

It is believed that the mined limestone boulders and slabs were meant for diverse structures.

Although the inoperative school rests on top of the quarry, it is believed that not much damage was done when the school was built.

“The fact that no cellars or other underground spaces were constructed has left a substantial section of the quarry intact,” a source monitoring the project said.

The Ninu Cremona school was built in the 1950s to a design by renowned architect Joseph G. Huntingford, then director general of the Public Works Department.

According to historians who spoke to this newspaper, no documents have so far come to light indicating the existence of such an ancient site. 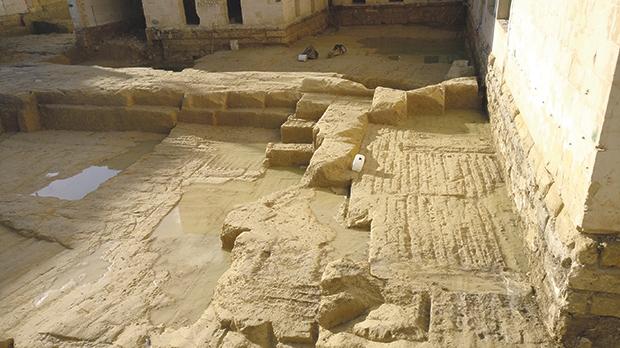 Given the size and characteristics of the location, this is a first for Gozo

There are two schools of thought among researchers, one saying the quarry goes back to the time of ancient Carthage and another that it relates to the annexation of these islands to the Roman Empire.

Incidentally, the Times of Malta reported on May 11, 2017 that remains of ancient walls that could date as far back as Punic times were unearthed just outside Victoria’s Citadel, at the site of a proposed car park.

The two walls have been tentatively dated to the Punic period (200 BC), however, they continued to be in use into the Roman period right through to Late Antiquity.

The Citadel discovery was made in test trenches during controlled monitoring by the Superintendence of Cultural Heritage, as part of a second phase of archaeological excavations. Last month, this newspaper reported on concerns, raised by residents, that ancient archaeological remains have been cleared away during works to pave a ramp off Triq Sant’Ursola in Victoria.

In a brief statement, the Ministry for Gozo told The Sunday Times of Malta that “works on the Gozo Museum are proceeding to schedule and the new revelations will be incorporated with the revised designs”.

The ministry noted also that the findings are subject to further investigations.

The brand new landmark is expected to incorporate a “multi-disciplinary regional museum and cultural centre” showcasing specimens and exemplars related to natural history, folklore and archaeology.

This depository is expected to group under one roof several State collections among them one bringing together works of art as currently there is no such collection on the sister island.

Around €3.7 million have been earmarked for this initiative which is being is co-financed by the European Development Fund.

“In the course of time, the prosperity of Carthage gave umbrage to Rome who challenged and broke the supremacy of her great rival in the Punic Wars between 264-146BC. Livy relates that after the victory of the Roman fleet over the Carthaginians at Lilybaeum (Marsala), the Consul Titus Sempronius sailed to Malta where Hamilcar surrendered to him with about 2,000 men. This is the only record left by a Latin writer of the annexation of Malta to the Roman Empire.

“It would appear that the Maltese were granted an autonomous government with the privilege of sending ambassadors to Rome to plead their cases when necessary, and later, the island was made a Municipium…

“It does not seem probable that a numerous Roman colony did ever settle in Malta, not only because the Romans rarely attempted to colonise the countries they conquered but also because Malta had no other attractions but its harbours.”

Source: Themistocles Zammit in Malta The Maltese Islands and their History. Published in 1952 by A.C. Aquilina & Co. Printed at The Progress Press Co. Ltd