Germany's Angela Merkel crossed the gates of the former Auschwitz Nazi death camp in Poland on Friday for the first time in her 14 years as chancellor, promising to battle a new wave of anti-Semitism.

Merkel is only the third chancellor ever to visit the Nazi German camp where a million Jews were killed between 1940 and 1945 and which has come to symbolise the Holocaust as a whole.

Her trip, which comes ahead of the 75th anniversary of the camp's liberation by Soviet troops on January 27, is being seen as an important political message.

On the eve of her visit, 65-year-old Merkel said that "the fight against anti-Semitism and against all forms of hate" was a priority for her government.

She also hailed a new €60 million ($66-million) donation for the Auschwitz-Birkenau Foundation that was approved by Germany's federal states on Thursday.

Merkel began her visit by walking under the Nazi slogan "Arbeit macht frei" (Work will set you free) that still hangs over the gates of the camp.

She will also hold a minute's silence by the Death Wall where thousands of prisoners were shot dead and visit the site of a gas chamber and a crematorium.

The visit "is a particularly important signal of attention and solidarity at a time when Auschwitz survivors are victims of anti-Semitic insults and hate-filled emails," said Christoph Heubner, deputy chairman of the Auschwitz International Committee.

Merkel was accompanied during the visit by a survivor of the camp, 87-year-old Bogdan Stanislaw Bartnikowski, as well as Polish Prime Minister Mateusz Morawiecki.

In total, 1.1 million people were killed at Auschwitz-Birkenau, including non-Jewish Poles, Soviet prisoners of war, Roma and anti-Nazi fighters.

Many were killed the same day they arrived at the camp.

"There is no other place of memory that demonstrates with such precision what happened during the Shoah," Schuster told AFP ahead of the visit.

Merkel follows in the footsteps of previous German chancellors Helmut Schmidt, who came in 1977, and Helmut Kohl, who visited in 1989 and 1995.

She has already visited several of the former camps in Germany over many years and has been to Jerusalem's Yad Vashem Holocaust memorial centre five times. 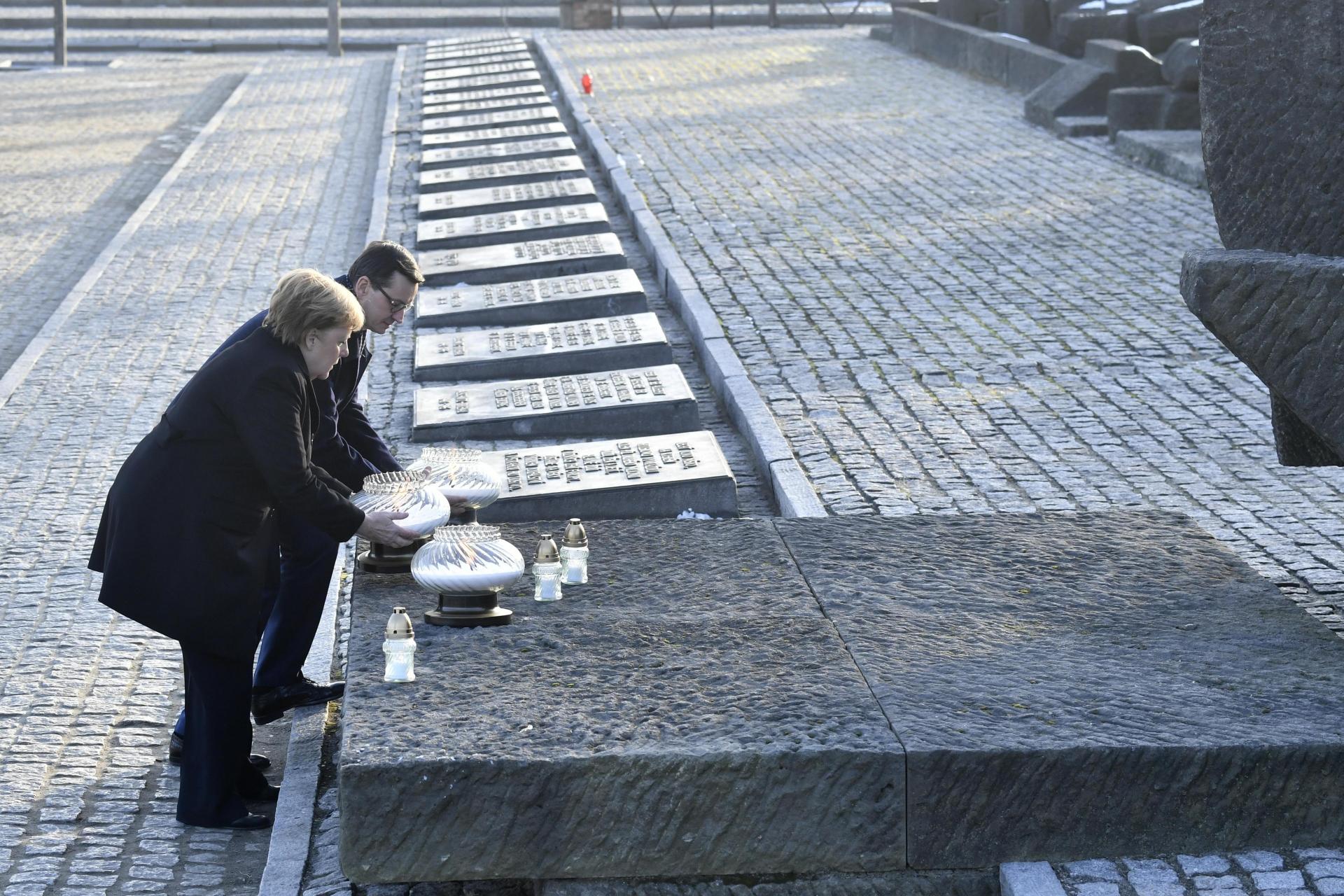 In 2008, she became the first German leader to address the Israeli parliament. In that speech, she spoke of the "shame" that Germans still feel.

Merkel has called the Holocaust a "break with civilisation" and has voiced concern about the rise of anti-Semitism in Germany.

Her visit comes two months after an attack aimed at a synagogue in the eastern city of Halle in which two people were killed -- part of a growing trend.

Police figures show that anti-Semitic offences rose by almost 10 percent in Germany last year from the previous year to 1,646 -- the highest level in a decade.

Germany's far-right AfD party, some of whose members have been accused of using anti-Semitic rhetoric, has called for a rethink of the way Germany remembers its Nazi past.

Senior AfD lawmaker Bjoern Hoecke has called for a "180-degree shift" in the culture of atonement.

The timing of the visit is also significant because of questions over Merkel's political future as tensions persist within the governing coalition.

German media reported that she wanted to make the trip ahead of any potential political crisis.

Merkel intends to step down at the end of her mandate in 2021 but there is a chance that the date could be brought forward if her junior coalition partners, the Social Democrats, pull out of the government.