The origin of the alleged apparitions, messages and phenomena associated with Anġelik Caruana at Borġ in-Nadur is not divine and not supernatural, the Church has concluded.

Mr Caruana, father of four and a receptionist at a home for the elderly in Floriana, first made headlines in 2006. The self-styled mystic has reported a series of visions of the Virgin Mary. Each month, he delivers monthly messages to the public at the same location.

He claimed that an inexpensive statue of the Virgin bought by his wife, started weeping tears of blood and oozing a large quantity of oil. He also claims to suffer attacks from the devil, to have the first signs of stigmata, and to endure the pain of thorns emerging suddenly from his mouth.

In 2009, Malta’s top forensic investigator Anthony Abela Medici, and forensic pathologist Albert Cilia Vincenti were commissioned by the Archbishop to investigate the claims. DNA tests proved the blood on the statue was Mr Caruana’s own and the oil was everyday kitchen oil.

Yet hundreds of pilgrims continue to go to Borġ in-Nadur in Birzebbuga believing Mr Caruana's claims.

The Church authorities reached this conclusion following detailed investigations instructed by Archbishop Emeritus Paul Cremona, on all the circumstances regarding the case.

During the investigations, various experts from different fields were consulted. These include natural and social sciences, spiritual and Marian theology. The criteria and norms of the Holy See regarding the discernment of presumed apparitions were also taken into consideration. A number of witnesses, including Mr Caruana, were also called to testify.

The decision of the ecclesiastical authorities was announced by means of a decree issued by the Archbishop’s Curia, signed by Archbishop Charles Scicluna, following consultation with the College of Consultors, and after having taken the advice of Gozo Bishop Mario Grech. 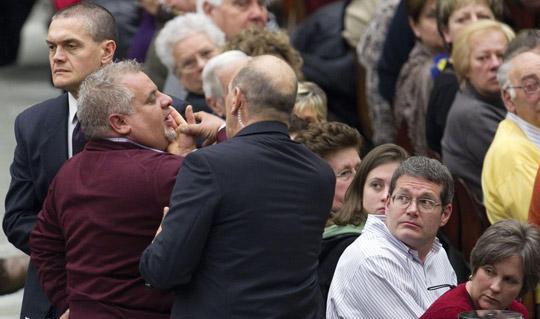 Angelik Caruana made the headlines in 2011 when he tried to jump over the barriers to present a letter to the Pope.

The decision was also conveyed to the members of the Presbyteral Council, which includes representatives of diocesan and religious priests, during a meeting held this morning.

"The Archbishop exhorted the Christian Community to promote the true devotion towards the Eucharist, towards the Blessed Virgin Mary, and towards the Saints, according to the official Liturgy of the Church. Priests, male and female religious, Catechists and all the Christian faithful are to refrain from the promotion, in any way whatsoever, of the said alleged apparitions, the said alleged messages and the other alleged mystical phenomena related to this case."

Members of the public who would like clarifications on this case, and on the decision of the Church authorities, may contact Fr Renè Camilleri, Episcopal Vicar, during office hours, on telephone number 2590 6238.

For further information go to www.thechurchinmalta.org.