Hundreds of people gathered outside parliament crying "shame on you" and "killers" hours after political resignations in the wake of the Daphne Caruana Galizia murder investigation.

The angry crowd pelted ministerial cars with eggs and coins as they left. Prime Minister Joseph Muscat was shielded by security as he exited on his way to a Labour executive meeting in Ħamrun.

People carried banners, flares, drums, megaphones and flags to get their message across and shouted: "Daphne was right".

Nationalist MPs Jason Azzopardi and Karol Aquilina were met with cheers as they walked out of parliament. The pair joined the crowd’s “justice” chants.

Official cars lined up outside parliament for hours, with drivers at the ready to take MPs away.

Protesters, including many young people, said they were angry with the Prime Minister.

James, 23, from Birkirkara said: "The Maltese people voted for what was meant to be a corruptless government. That was Muscat’s promise, but instead of kicking it out, he defended it until the last drop along with his mates.”

His view was echoed by 22-year-old Mattahis from Attard. "We are tired and enough is enough," he said. "The proof is black and white and everyone needs to resign. We need to fold over a new paper and move on. Speculations aren’t speculations anymore. It’s fact!"

Ritianne from Mosta took her children to the protest along with her sister and her father. “We can’t stand it in anymore," she said. "Malta has changed so much in the past years with the corruption”

The protest then moved from outside parliament to Castille Place, where protesters were addressed by Manuel Delia, one of the organisers. He told the crowd that the Prime Minister must leave now.

"These were days and hours full of news and today was a dramatic day for the country but we are not there yet because Joseph Muscat, the culprit, will report to work tomorrow," he said.

"He wants to continue protecting those around him. He has protected them for six years, he was one of them and so he should leave with them."

Pia Zammit from Occupy Justice, who had been campaigning for justice for Ms Caruana Galizia since her murder in a car bomb in October 2017 said: "Daphne was right and she should be here today to be vindicated, applauded and thanked". 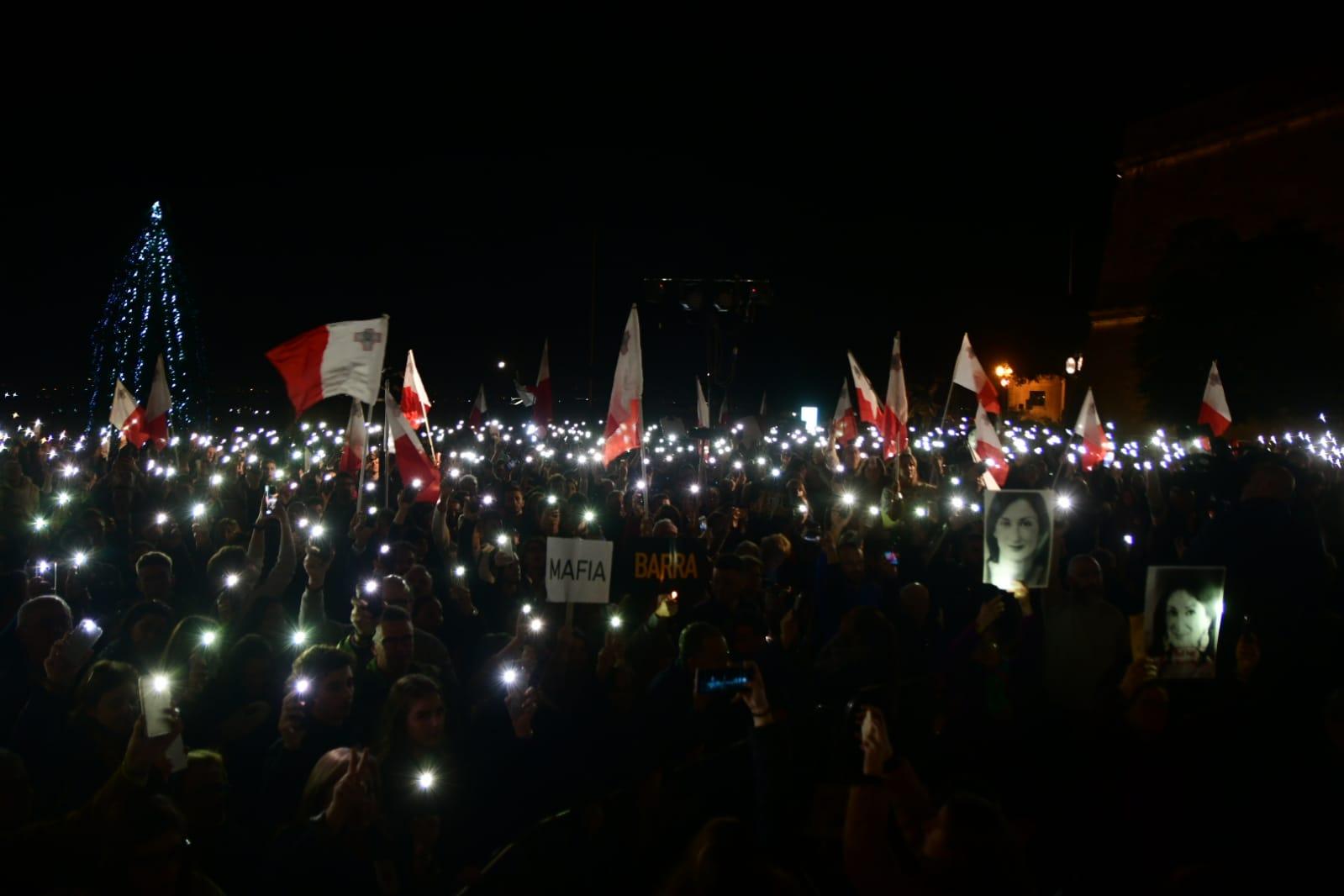 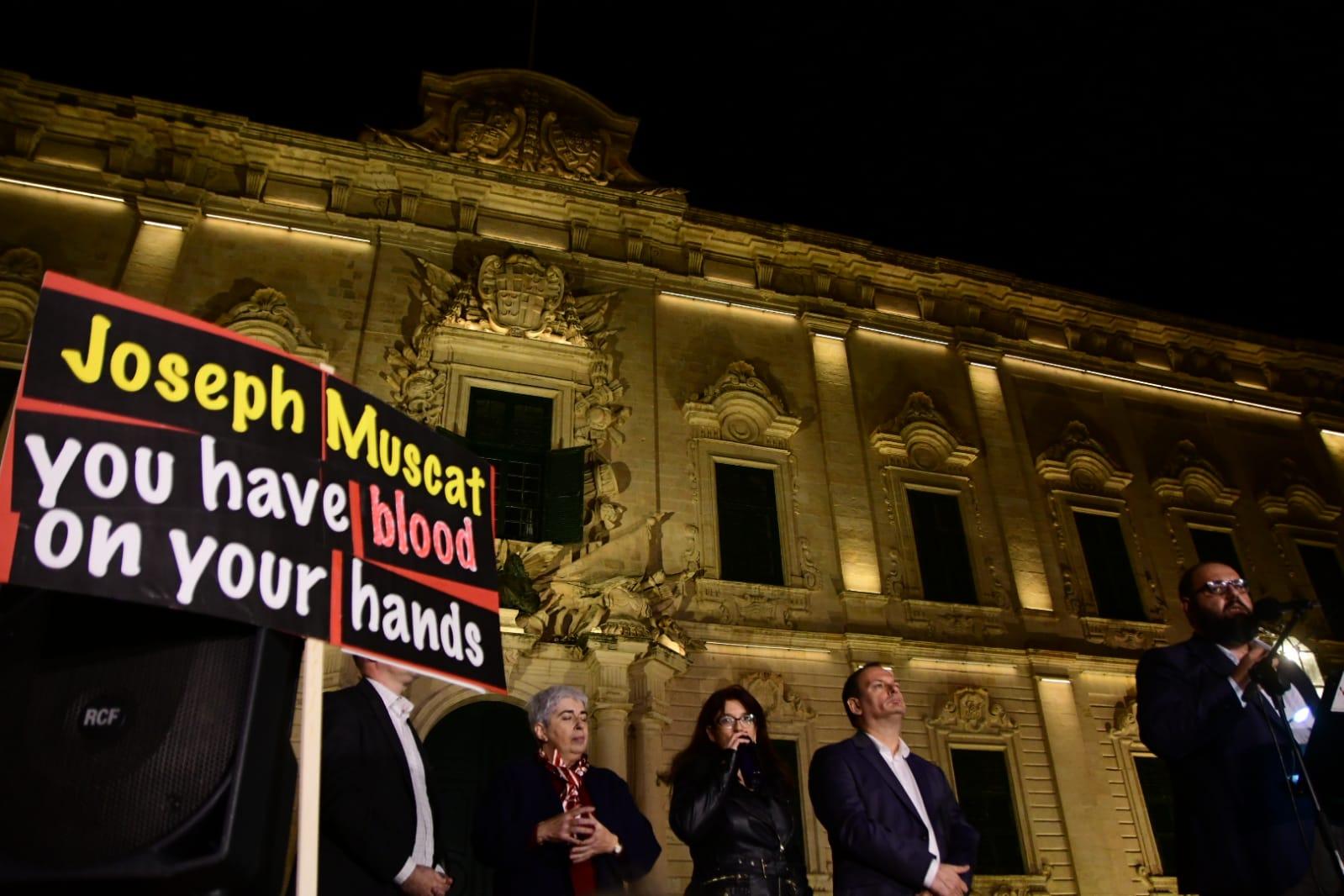 One of the protest signs as organier Manuel Delia addresses the crowd. Photo%3A Jonathan Borg 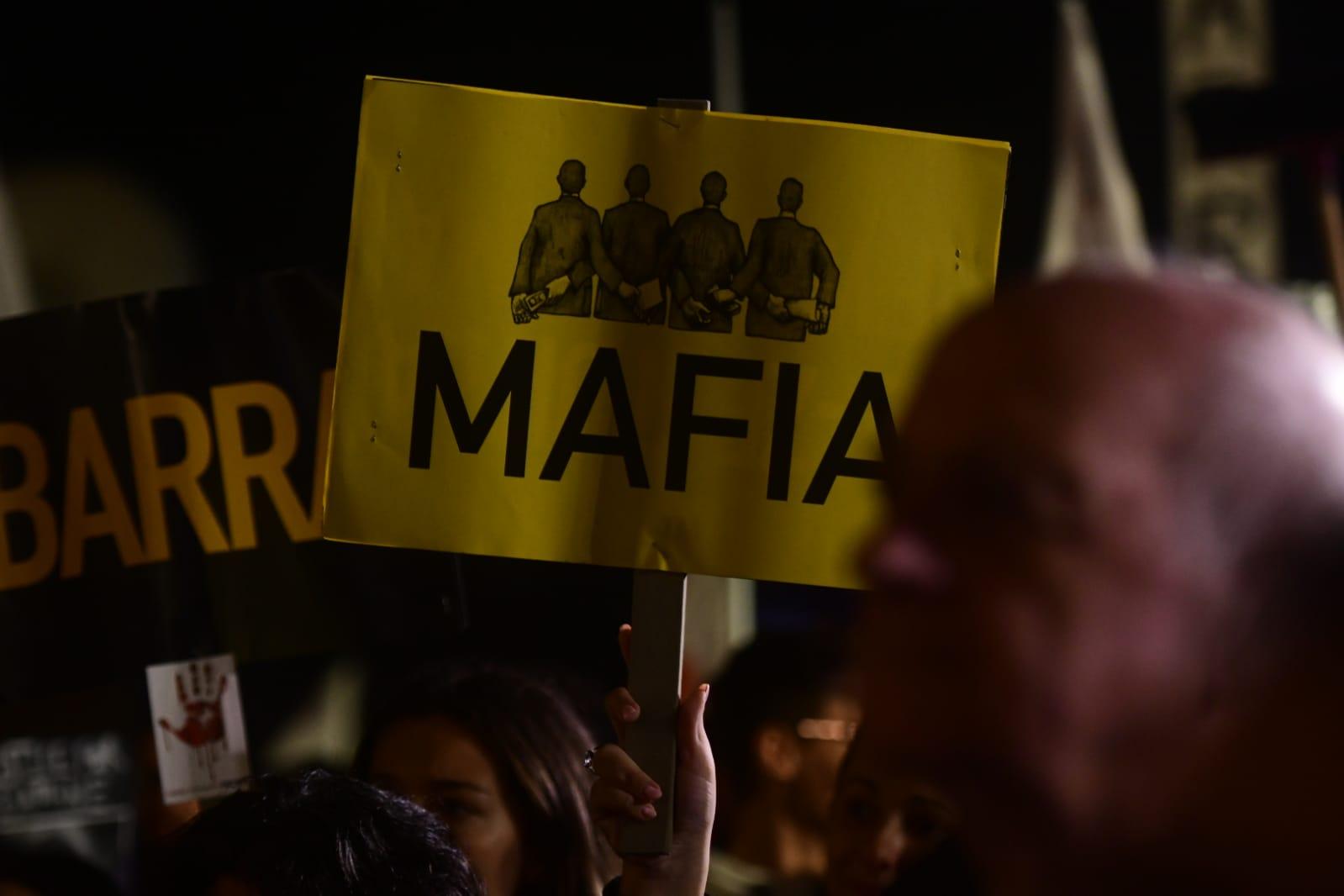 One of the protest signs held aloft at the protest. Photo%3A Jonathan Borg 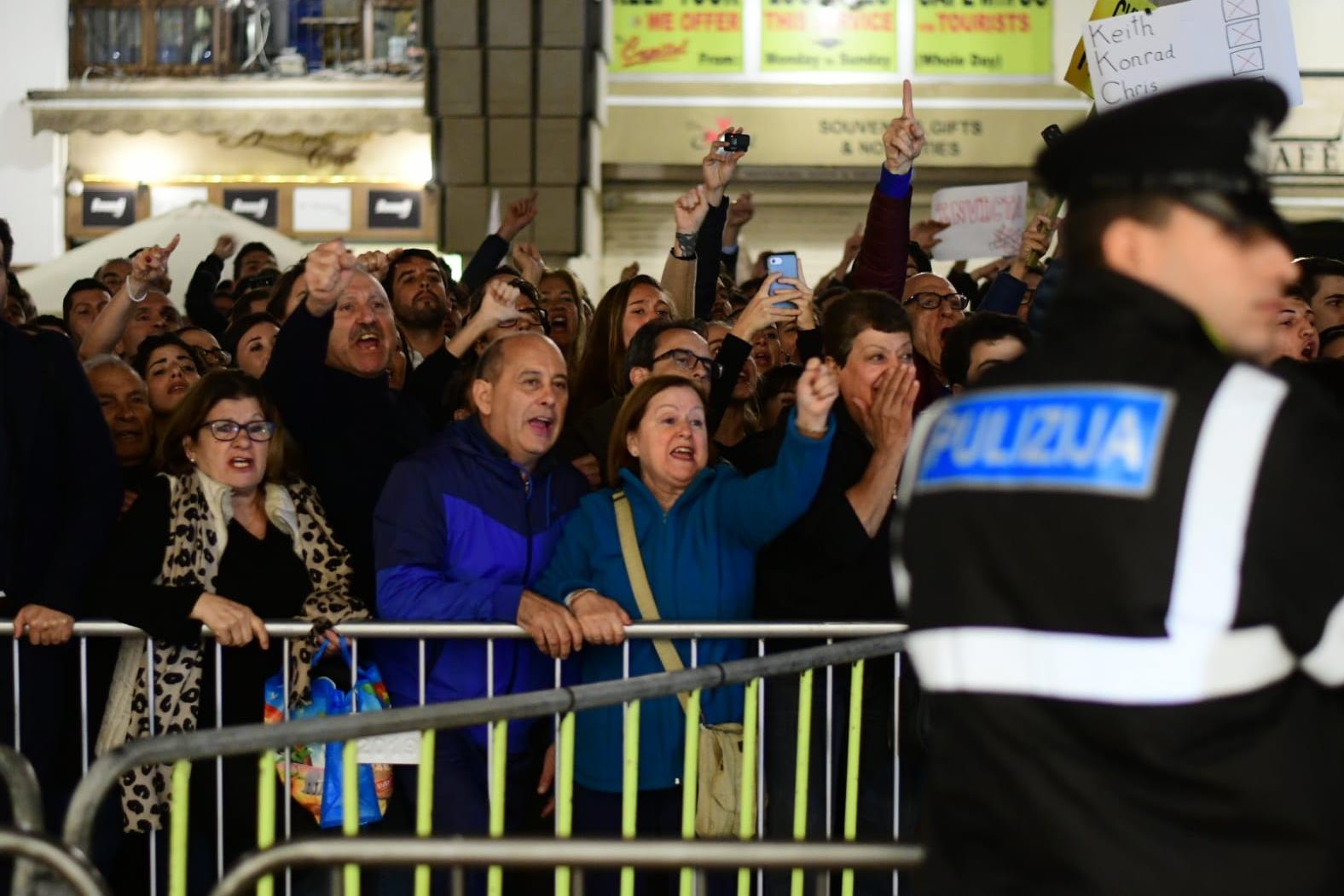 Crowds kept behind barriers outside Parliament. 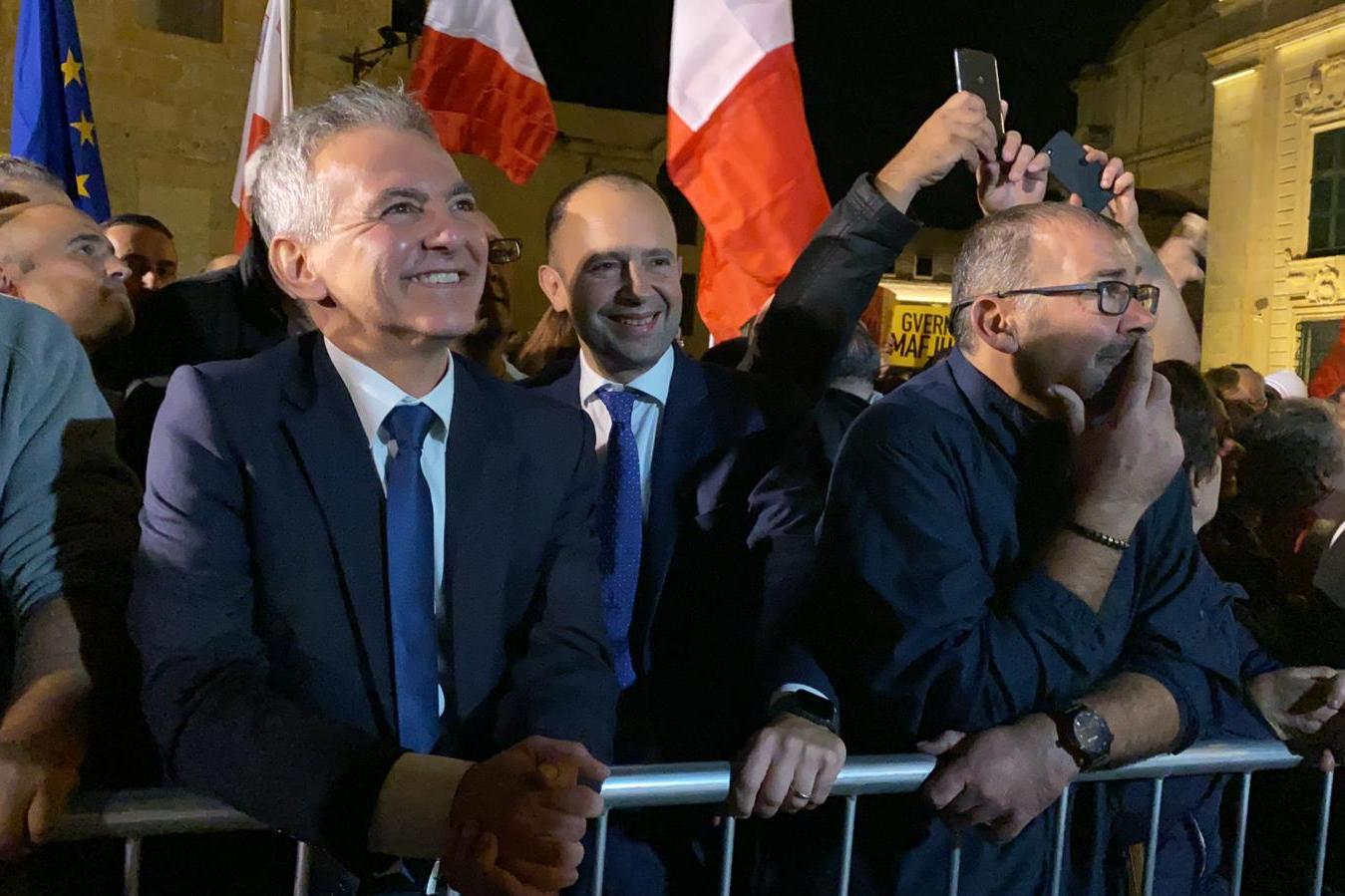 David Thake, a vocal critic of the Labour government, quoted one of the last posts from Ms Caruana Galizia's blog:"There are crooks everywhere you look. The situation is desperate.”

He added: "Daphne, the crooks are coming out and their situation is getting desperate."

Mr Thake paid tribute to Ms Caruana Galizia's family, as her parents and sisters joined the crowd. "I want to thank her family, especially her children. These three sons who were accused, victimised, insulted... all because they wanted the truth about who killed their mother," he said.

TV presenter and former Nationalist candidate Norman Vella said speakers had come with pens because they had no electricity. "We were like Joseph Muscat, because he lost power. I was about to say blackout but they are the ones with 17 Black."

In an appeal for unity, he said: "It is time to take our country back. It is time that Malta once again becomes tagħna lkoll. Us Labourites, us Nationalists, us without a party." 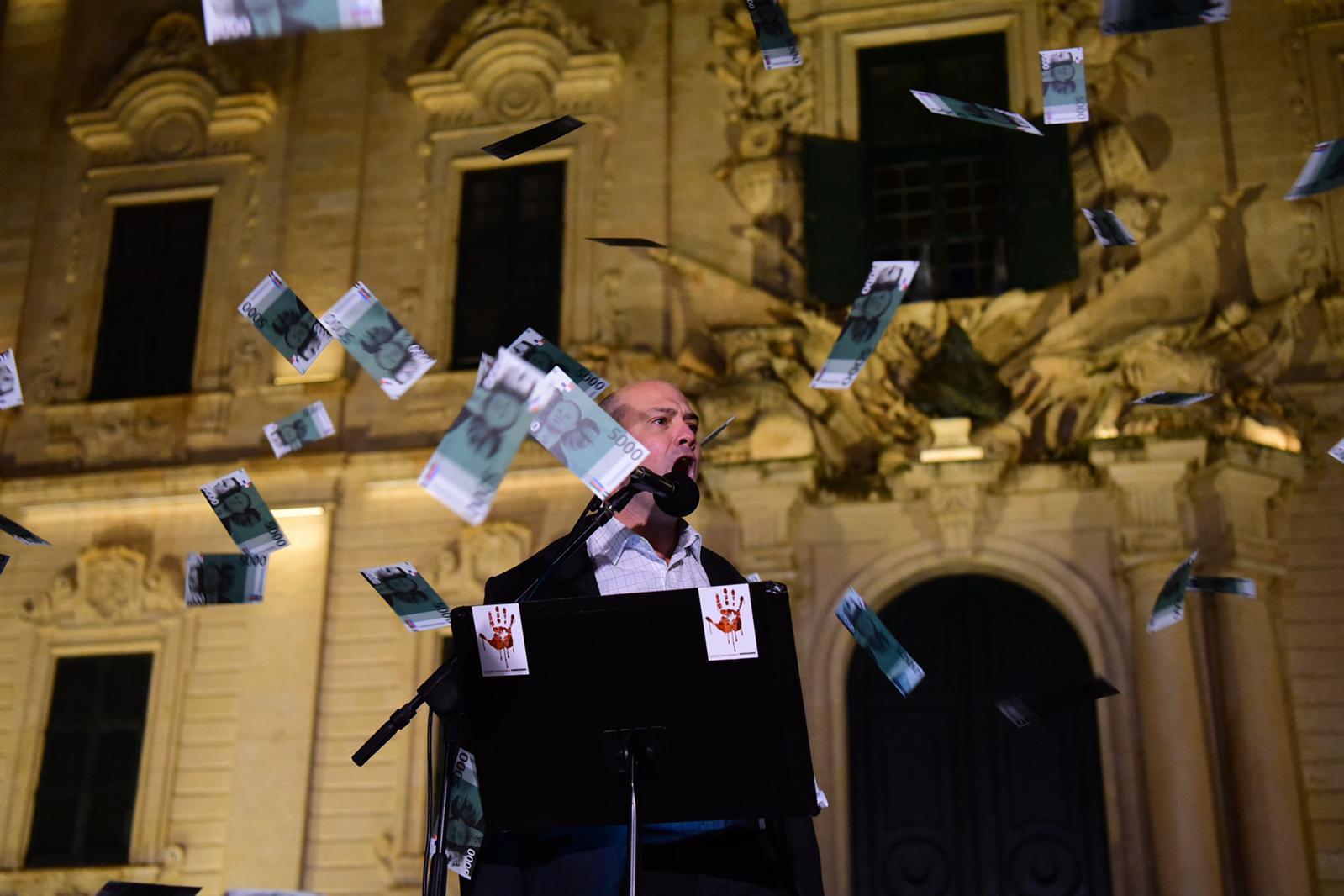 The crowd throws fake notes as speaker Norman Vella as he contrasts the hard work of the people with the government's actions. Photo: Mark Zammit Cordina

He concluded: "Let us come together and use (Dom) Mintoff’s Malta lewwel u qabel kollox (Malta first and foremost) and Eddie’s Malta Għalina u għal uliedna(for us and our children).