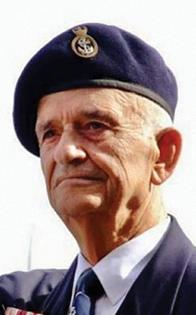 CORDINA. On Wednesday, January 13, CARMEL of Ħamrun residing in Valletta, ex-Royal Navy, member of the British Legion, RNA and George Cross Movement, aged 81, passed away peacefully comforted by the rites of Holy Church. He leaves to mourn his irreparable loss his wife Antida, his children Alan and his wife Antoinette, Andreina and her husband Mro Paul Borg, and Arist and his partner Patricia, his grandchildren Gabrielle and her fiancé Ian, Zak, Martina and Ben, his great-granddaughter Carla, his brother Joe and his wife Connie, Pauline, widow of his late brother George, brothers and sisters-in-law, their respective families, cousins, relatives and friends. The funeral leaves Mater Dei Hospital tomorrow Friday, January 15, at 9am for St Augustine parish church, Valletta, were Mass praesente cadavere will be celebrated at 9.30am, followed by interment in the grave of the Lay Carmelites, Valletta, at Santa Maria Addolorata Cemetery. Lord, grant him eternal rest.

Today being the 23rd anniversary of the death of LILY PACE, a Mass for the repose of her soul shall be celebrated at 7.15pm at the Salesian Oratory, Sliema. May she rest in peace.

AGIUS – EVELYN. Remembering our mummy with love on the 60th anniversary of her untimely demise. Brigida and Moira.

BRINCAT. In loving memory of our dearest parents SAVIOUR (founder of Brincat’s Co. Ltd) and ROSA who passed away on 11.1.1994 and 15.1.2013 respectively. Always in the heart of their children and their spouses, grandchildren and great-grandchildren. A Mass in repose of their souls will be said at Tal-Ibraġ parish church, tomorrow, Friday, January 15, at 6.30pm.

CINI – GIOVANNA. Cherished memories of our beloved mother, today the 14th anniversary of her demise. Always in our thoughts and prayers. Her children, their spouses and their families. Lord, grant her eternal rest.

GRECH – EDWARD L. In loving memory of my father today the 72nd anniversary of his death. Always in my prayers. LIĹLIAN.

GRECH – TONY. In loving memory on the 35th anniversary of his demise. Always remembered in our thoughts and prayers. Grant him eternal rest. His family.

MICALLEF EYNAUD. In loving memory of our parents EDDIE and VERA, who passed away to eternal life 22 years and nine years ago. Fondly remembered by Cecily, Greta and Philip and the grandchildren. Lord, grant them eternal rest.

ZARB DIMECH. In ever loving memory of GEORGE on the 19th anniversary of his demise today. Fondly remembered and deeply missed by his son Anthony and his wife Petronella and their daughter Alexia-Sara and by his nephews John and Francis Zammit Dimech. A prayer is solicited.