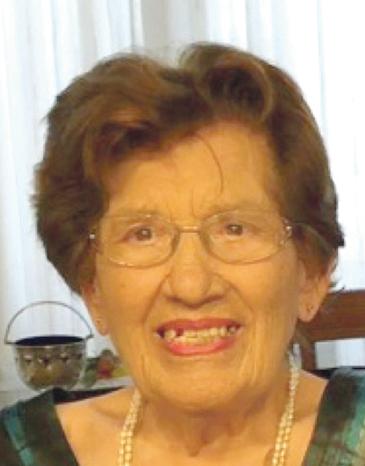 CALLUS. On January 13, at Mater Dei Hospital, GEMMA née Attard, at the venerable age of 98, widow of Michael, passed away peacefully comforted by the rites of Holy Church. She leaves to mourn her great loss her daughter Doreen wife of Anthony Mifsud, her son John and his partner Tessie and Roberta wife of Mario Said. Her dearest grandchildren Mark and Clare, Karl, Alexia and Damian Casapinta, Krista and Matthew Sultana, Michael and Sarah, Bianca and Gilbert Schembri, Martina and Chris Bartolo Parnis, her great-grandsons Benjamin, Luigi, Gianni and Thomas. Her most devoted carer of 10 years Marivic, her nieces and nephews other relatives and friends. The funeral cortège leaves Mater Dei Hospital tomorrow, Thursday, January 16, at 9am, where Mass præsente cadavere will be celebrated at Stella Maris parish church, Sliema, at 9.30am. No flowers by request but donations to Id-Dar tal-Providenza, Siġġiewi, will be greatly appreciated. Lord, grant her eternal rest.

RIOLO. On January 14, MARIO, aged 68, passed away peacefully comforted by the rites of Holy Church. He leaves to mourn his loss his wife Juliet, his daughter Bernadette and Edward, grand-daughter Chayenne, his brothers and sisters, mother-in-law and his in-laws, nephews and nieces, other relatives and friends. The funeral Mass will be held today at the Basilica of the Assumption of Our Lady at 3.30pm. Lord, grant him eternal rest.

BAJADA – CARMEL (Lino). In loving memory of a dear father, grandfather and great-grandfather, today the 55th anniversary of his death. Always in our thoughts and prayers. Cecilia, Claude, Szilvia and Benedek.

CASSAR – Dr PAUL CASSAR MD. DPM. In ever loving memory of a dear father, grandfather and great-grandfather on the 14th anni- versary of his death. Fondly re-membered and missed by his only daughter Christine and her family.

CASSAR OLIVIER – WADDY. In loving memory of a dear father and grandfather today the 15th anniversary of his demise. Anne, Karla and Michael.

DEPASQUALE – MARIA V. Unfading memories of a beloved and devoted aunt on the 19th anniversary of her death. Lovingly remembered by her nephews, nieces and in-laws. Lord, grant her eternal rest.

KELLY – EDWARD. In loving memory of a dear father and grandfather, on the 47th anniversary of his death. Sadly, missed and fondly remembered by his daughters Pat, Aida and her husband Neville as well as his grandchildren and their families. Lord, grant him eternal rest.

MALLIA – JOSEPH (Teddy). In ever loving memory of a dear husband and father on the 14th anniversary of his passing away to eternal life. Fondly remembered by his wife Mary and his children Raymond, Martin and Norma, Damian and Debbie. Always in our hearts and prayers. Lord, grant him eternal rest.

MICALLEF – Perit WILLIAM F. MICALLEF. Husband of the late Maria Dolores nèe Preca. In ever loving memory, on the 18th anniversary of his passing to a better life. His children Noreen, Peter and Paul and their families. Lord, grant him eternal rest.

PALMIER – ANTHONY. On the anniversary of his death. Never forgotten by Edwidge, Charles and family.

PORTELLI DEMAJO – LUCIA. In loving memory of a dear mother and grandmother who passed away eight years ago. Gone but never forgotten. Her son Joe and daughters Josette and Rosalie, in-laws and grandchildren.

SHEPHARD. In loving memory of GEORGINA, née Griffiths, today the 23rd anniversary of her death. Remembered with much love by her daughters Mary and Lilian, widow of Lino Maistre, her grandchildren Bryan Maistre and his wife Jackie, Sharon Maistre-Welsh, John Maistre, and her great-grandchildren Georgina, Eunan, Carla, Luke, Jamie and Megan. Please remember her in your prayers.

ZAMMIT TABONA. In loving memory of EDWIN, today the 27th anniversary of his death. Time passes but you are always in our thoughts. His family.

To whom it may concern

I, the undersigned, am obliged to the Ministry of Education and Employment for funding a Master of Education degree entitled ‘Developing Fit-For-Purpose Assessment methods for Graphical Communication at Secondary School Level’, through the ENDEAVOUR scholarships scheme (Group B – National Funds).

This study identified, among others, a number of assessment methods that can be effectively used in class in line with assessment of/for/as learning.

In this regard, an assessment resource pack was created with the primary aim of helping graphical communication teachers on their day-to-day assessment of students.

This Master degree in Graphical Communication and Engineering Drawing Education was read at the University of Malta between 2016 and 2019.