A controversial anti-migrant ship, currently outside Maltese territorial waters, will be refused entry into the island if permission is requested.

"So far no request has been made, but all we can say is they are not welcome," a government source told Times of Malta.

The ship, C-Star, belonging to the Defend Europe movement, has been plagued by controversy for weeks, as it tries to block the rescue of refugees from the Mediterranean Sea, which it described as part of an “invasion” endangering the continent.

And local NGOs have already sounded a warning to the boat to stay away from Malta.

"The mission of C-Star is to prevent refugees and other forced migrants from accessing safety and security. We are calling on the Maltese authorities not to allow the vessel to dock in Malta, and not to cooperate with an organisation that has demonstrated itself to be racist, and with a mission that clearly aims to violate basic human rights," said Maria Pisani from NGO Integra Foundation.

Times of Malta is informed the ship captain enquired with the Maltese authorities about procedures should they need services. It is currently travelling at four knots. 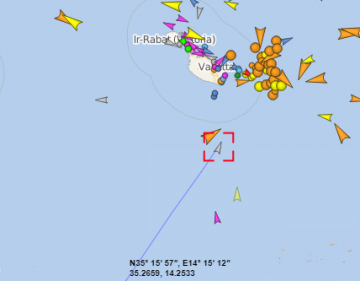 "Just yesterday the island remembered the hope that was delivered with the convoy of Santa Marija, and how the nation came together in defiance of hatred, racism and populism. The mission of the C-Star vessel is very clear - to prevent refugees and asylum seekers from accessing their basic human right to protection. We are calling on the Maltese authorities to send out a clear message, and to take a stand," Dr Pisani told Times of Malta.

The C-Star was described at the European Parliament as the “ship of hate”. Last July, Italians called on their Minister for Transport to stop the ship from docking in Catania, preventing it from setting sail.

At the end of July, it was detained in Cyprus and then turned away with its crew, after discrepancies emerged in the status of a group of Sri Lankans on board.

Just last week, it faced technical problems and was ironically offered assistance by the humanitarian refugee rescue vessel Golfo Azzurro, one of the ships that Defend Europe has vowed to stop.

Defend Europe is a branch of the white nationalist Identitarian movement, which had started in France in 2002.