Brussels has no intention of interfering with the recipe of Maltese pastizzi, since the article claiming this fallacy this morning was just an April Fool's joke courtesy of Times of Malta newsroom.

But the joke had a positive consequence for the industry, which saw an unusual boost in sales this morning.

Dolceria Micallef in Valletta reported they had not sold so many pastizzi in 20 years, running out by 11am. 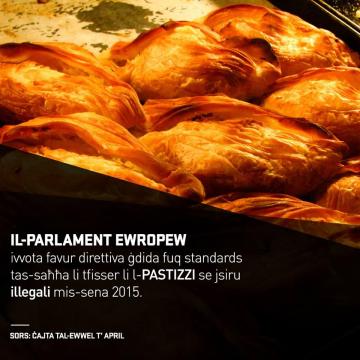 Its announcement, however, was given away by a line at the bottom which said the source was an April Fool's joke.

Readers had mixed reactions. Some clearly fell for it, like the first reader who suggested Malta should fight Brussels like Italy had done with a real proposal to ban restaurants from serving olive oil in dishes.

The reaction was even more dramatic in a couple of replies to this first comment with one reader supporting the initiative and pointing out that trying to fight it would be akin to promoting a "killer-culture".

Others figured out it was a joke and added their own spin, like a certain William Cauchi, who suggested setting up an NGO, Fondazzjoni Insalvaw il-Pastizz.

Similarly, his namesake, William Flynn volunteered for The Pastizzi Commandos.

Someone even set up a Facebook page in aid of the 'cause', the Moviment Salva il-Pastizz (Movement save the Pastizz).

Others still, clearly did not have a sense of humour, like the blogger Jacques Rene Zammit who felt the day's spoof articles in different news portals were "pathetic".

In fact, timesofmalta.com was not the only one to prank its readers. The Malta Independent ran a story claiming that parts of the national anthem would be updated. Newsbook ran with a story many wished was true: that speed cameras will be scrapped because they are not sustainable.

The BBC this year did not have its own April Fool's joke but took time to expose the pranks of other newspapers.

The Daily Telegraph ran a story that Alex Salmond, First Minister of Scotland, will replace Queen Elizabeth on a post-Independence Scottish coin, while The Sun ran a story, under the headline 'Frackingham Palace', claiming that the Queen will be drilling for gas in the palace garden.

In its story, timesofmalta.com reported that  Malta’s traditional pastizz will have to go for a major recipe overhaul or else face extinction as a result of tough EU legislation to cut down on obesity.

"In a drive to cut down on burgeoning health bills, the European Commission has published a list of 20 foods slated for a recipe makeover – and the Maltese pastizz is on it," we reported..

"Weighing in at some 350 calories each, the pea or ricotta pastizz is a Maltese delicacy which has lasted generations.

But with a recipe of butter, lard and filo pastry, in a report to be released tomorrow, the Commission described pastizzi as a “calorie explosion” which could be detrimental to health.

“The recipe of the Maltese pea or cheese cake means the level of saturated fats is way beyond what is healthy. Butter and lard must be eliminated and only low-carb pastry may be used,” 'Avril Fersten,' the Danish head from DG Health was quoted as saying..

Ms Fersten (sic) said the list of foods, which also includes Scottish haggis and a lard-based Spanish chorizo sausage, is expected to come in line with EU regulations by September or else be declared illegal.

Sources said that although some officials at Castille enjoyed eating pastizzi in their offices between meetings, the government would not be opposing the recipe change - despite threatening the use of the veto on other issues in the past.

"There are more important issues to concentrate on," he said, "and this may help us reduce hospital waiting lists. The offices at Castille are also set to be cleaner from now on and hopefully some of our people will be a bit fitter."

However, Joe Camilleri, the (fictional) president of the Association of Maltese Pastizzi Makers, expressed outrage at the EU decision, saying the revised recipe would ruin the taste cherished by many Maltese.

“If the EU thinks it can dictate to us what we put in our food, it has another think coming. If we don’t overturn this ridiculous legislation, we should pull out of the EU,” an incensed Mr Camilleri said.

Eurostat figures recently placed Maltese men first in Europe when it comes to obesity while Maltese women are third. It is understood that the government, which has threatened to use its veto on other issues, will not stand in the way of the EU on this matter.

Reducing Malta’s rate of obesity by 4.3 per cent until 2020 would save the country €3 million a year, outgoing Health Ministry Godfrey Farrugia said last month.

The news comes a day after Times of Malta reported that the Maltese ġbejna has been saved from potential extinction by a new legal notice that protects it from EU restrictions on milk products.