A group of 58 migrants picked up from small boats by the migrant rescue ship Aquarius was transferred to a patrol boat and brought to Malta on Sunday afternoon.

The rescued migrants included Libyans, Syrians, Palestinians, Somalis and Pakistanis. They include seven families and three children under five.

Aquarius rescued the migrants in two groups off Libya and was refused entry by Italy, France and Malta. However, following contacts between French President Macron and Prime Minister Joseph Muscat, arrangements were made for the migrants to be transferred to an AFM vessel off Malta. Once brought to Malta they are to be sent to Portugal, Spain, France and Germany.

Also brought to Malta was a small white dog, which was rescued with a Libyan family. Dr Muscat tweeted a picture of the dog in the morning and said at a party activity that Malta "rescued all lives". The dog was disembarked in a carrier box and is being quarantined.

UPDATE Successful completion of complex transfer of all 58 rescued people, including 7 families, in international waters. #Aquarius is forced to return to port to deal with flag registration.#SaveRescueAtSea pic.twitter.com/UDq3Ag9Jv6

Aquarius lost its Panama registration soon after the start of its latest rescue missions, after having earlier lost its Gibraltar flag. It will now head to its home port until its registration problems are settled.

The ship was in the news throughout the summer. It was refused entry by Malta, Italy and France in June and eventually disembarked some 600 migrants in Valencia.

In August it was allowed in Malta only after a standoff during which arrangements were made for its 150 migrants to be transferred to other countries. 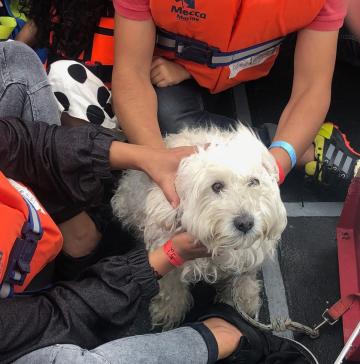 The dog rescued by Aquarius.

Dr Muscat referred to the transfer operation, saying that none of the migrants would stay in Malta.

"The choice we make, on my responsibility is to be part of the solution and not part of the problem."

He said migration was asymptotic of a wider problem in Europe. A schism was being in Europe between those who want to look ahead despite the problems and those who wanted to be insular and act on their own.

Médecins Sans Frontières, which operates Aquarius said in a tweet: "No search & rescue vessels currently in the area. No witnesses. People fleeing Libya will continue to die.”

UNHCR, the UN Refugee Agency, said it was grateful to Malta for its decision to allow the 58 rescued people to be disembarked, ending their ordeal after days at sea. It was also grateful to France, Germany, Portugal and Spain which have offered to receive these people from Malta.

It reiterated its call for the establishment of predictable arrangements in the Mediterranean for the disembarkation of people rescued at sea.

"Doing so will save lives," it said.

The UNHCR also expressed concern over growing uncertainty over future search and rescue capacities on the Central Mediterranean.

"This time last year, five NGOs were conducting search and rescue operations on the Central Mediterranean. In 2017, NGOs saved over 46, 000 lives according to the Italian Coast Guard. The de-registration of the Aquarius is deeply worrying and would represent a dramatic reduction of search and rescue capacity at precisely the moment when it needs to be stepped up.

“Reinforcing search and rescue capacity on the Central Mediterranean and disembarkation in places of safety, has to be everyone’s goal,” said UN High Commissioner for Refugees Filippo Grandi. “We are talking about people’s lives. Refugees and migrants cannot be continually put at risk while States argue over their responsibilities.