Footwear has been used by humans for over 10,000 years. But the role of footwear has changed over the centuries from one of protection to a status symbol during the Roman Empire to one of fashion during the Renaissance Era when heels were introduced.

Children’s shoes generally mimicked the idiosyncratic styles of the adults and it was not until the 20th century that children’s footwear diverged from the dominant adult prototype and footwear evolved specifically for children. 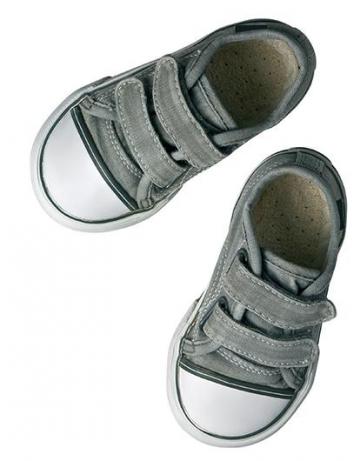 More than 60 per cent of shoes tend to be too small for their owners' feet.

However, the ideal shoe is very difficult to find and is often a matter of compromise, particularly with older children who are influenced by fashion and peer group pressure. Footwear which is too big, too small or does not fit properly, can cause foot problems in adulthood, such as hammer and claw toes, bunions and muscular problems, but even in other parts of the body such as pain at the ankles, knees and back.

Shoes must fit the foot snugly at the heel with a good fastening system, thus preventing the foot from slipping forward in the shoe while walking.

A recent study conducted at the Podiatry Department within the Faculty of Health Sciences, University of Malta, investigated the adequacy of school shoes in a primary State school. Researcher and podiatrist Clarice Cilia recruited a sample of 124 children (60 boys and 64 girls) attending grades 3, 4 and 5 at this school at the beginning of the scholastic year, with most shoes still new.

Shoes were mainly assessed for fit, which included length and width. The results of this study revealed that a staggering 61.7 per cent of shoes were too short in length, indicating a poor fit. Of interest was a significant percentage difference between genders, with boys having shoes of a shorter fit when compared to girls. These results demonstrate that although most school shoes had a suitable style with an adequate fastening system, ill-fitting shoes remain an issue. Since the majority of the shoes were new, the findings imply that more education related to choosing the right shoe size with the appropriate fit is needed.

When purchasing children’s shoes, one needs to keep in mind that children’s feet grow irregularly and rapidly. As every parent can attest, children seem to outgrow a pair of shoes in a jiffy. Before 18 months, feet grow more than half a shoe size every two months. Toddler’s feet grow an average of half a size every three months. Until the age of three years, a child’s foot size increases by one size every eight months and thereafter every year.

Shoes must fit the foot snugly at the heel with a good fastening system, thus preventing the foot from slipping forward in the shoe while walking. The shoes need to allow enough room for the toes, about 1.25cm (a thumb’s width) between the longest toe and the tip of the shoe. This allows for sufficient movement of the toes and reasonable room for growth. In order to get the right fit, it is important that fitting should be done with the child standing up, as the posture of the foot is different from when the foot is non-weight bearing.

Also beware of the shoes’ material. Children’s feet perspire a lot, and therefore, the shoe upper should be made of breathable materials, such as leather. This will allow the foot to ‘breathe’ comfortably, thus avoiding skin infections associated with humid, closed environment, commonly seen with shoe materials of poor quality.

Most importantly, never buy shoes unless the child is present to try them on. This is particularly relevant when parents buy footwear online or without their children present and rely solely on the size marked on the shoe box, not on actual fit. The child needs to try the footwear before purchase. If parents feel concerned, they should always seek professional advice, for whatever reason, as it is better to iron out any is-sues and intervene at an early stage rather than later.

Cynthia Formosa, head of the Podiatry School at the University of Malta, in fact suggests that before a parent shops for a pair of shoes, one visits a foot specialist like a podiatrist where gait can be observed and analysed and the child is prescribed the correct category of shoe type.

This would help one buy the appropriate shoe that is adequate for the child’s specific foot type and biomechanics. As a result of the variety of foot shapes, shoe manufacturers and companies have developed different mod-els of shoes to accommodate children of all strides.

The study mentioned in this article was approved by the University of Malta Ethics Committee and consent was sought from parents/guardians from all children who participated before any data was gathered.

Key tips for a good fit

• A good fit includes length, width and height of uppers;

• Always leave around 1.25cm between the longest toe to the tip of the shoe;

• Shoe fitting should be done with the child standing up;

• Always have both feet meas-ured, as one foot might be slightly longer than the other.

• Think twice when purchasing shoes over the internet;

• Used shoes that have lost their shape should be avoided.

• Most toddlers are flat-footed when they first start walking because the muscles and liga-ments of their feet are under-developed.

•  Toddlers should go barefoot as often as possible to encourage balance, posture and coordi-nation.

•  See your doctor or podiatrist if you are concerned about your child’s feet or gait.

Stephen Mizzi is a podiatrist. This article first appeared in Child magazine.