A boat of migrants just off the Maltese coast were not rescued by the Armed Forces but instead given fuel and coordinates to reach Italy, survivors have told a rescue NGO.

Alarm Phone, on Wednesday published transcripts of conversations with survivors from the boat, who said they had Malta in their sight on the morning of April 11.

Although the AFM intercepted them, the survivors say that rather than being brought to Malta they were given fuel and a new engine, and directed to Pozzallo, Sicily.

Writing on its website, Alarm Phone said that many wondered how a flimsy, overcrowded, and unseaworthy rubber boat had been able to navigate around 500 kilometres from Zliten, east of Tripoli, Libya, all the way to Pozzallo, south of Sicily in Italy. 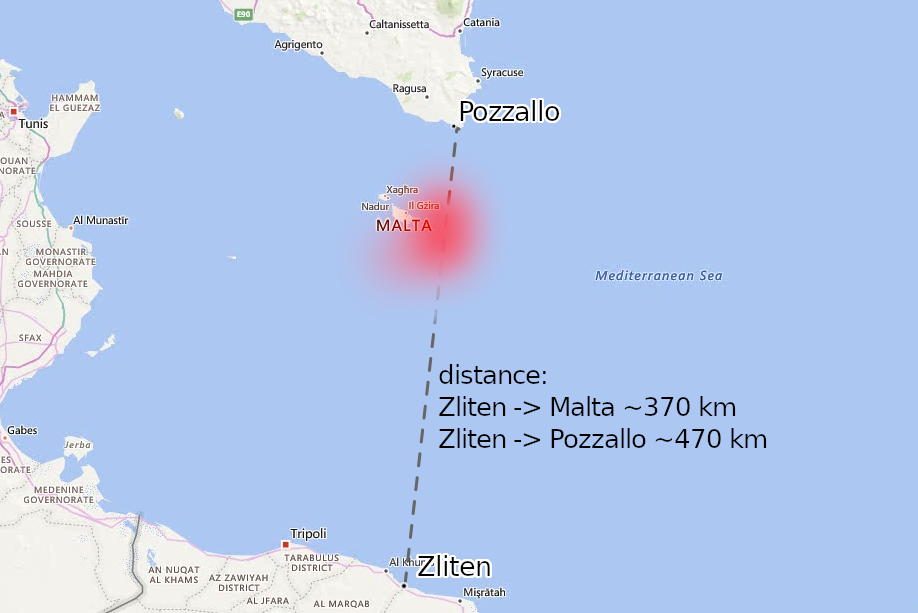 A map of the migrants' route published by Alarm Phone.

Quoting Italian media reports, NGO said the mayor of Pozzallo, Roberto Ammatuna had thought it was traffickers who had helped migrants arrive all the way to Italy by towing them halfway across the Mediterranean on a larger “mother ship”.

"Little did he know that in this case, those who facilitated the arrival of the boat to Italy were, according to survivors, the Armed Forces of Malta,” Alarm phone said.

A few weeks after their arrival in Italy, some of the 101 survivors of the crossing re-connected with Alarm Phone and shed light on what happened to them during their journey.

The video evidence they shared as well as their testimonies,  Alarm Phone said, raised grave concerns about the behaviour of the AFM.

The video shows people floating in the water, wearing life jackets. Instead of proceeding to immediately rescue those overboard, it circled around the area.

Alarm Phone claims survivors say the AFM made "dangerous manoeuvres" close to people in the water, further endangering their lives.

"After failing to assist, and even directly endangering and threatening the people in distress, the survivor testimonies highlight how the AFM provided fuel, an engine, and GPS coordinates to the distressed and instructed them to continue to Italy – practices commonly associated with smuggling operations,” the NGO said.

A senior source in the AFM told Times of Malta that this practice has been in use since the start of the migration crisis in the early 2000s.

“If a boat is not in immediate danger, then there is a loophole that allows us to facilitate them on their journey north. Of course if a boat is in clear danger then you must take it in, but they are free to continue travelling north to mainland Europe if they wish,” the source said.

The government did not respond to a request for comment on Wednesday morning.