Artist Omar Lhamzi donned a bright yellow vest and paint-splattered shoes, selected a brush and set to work on his latest canvas – the wall of a house in Morocco's seaside capital Rabat.

Lhamzi is one of a new generation of artists whose murals are changing the face of Morocco's cities.

A wander through Rabat's avenues and alleyways reveals an array of freshly painted works, in which larger-than-life fantasy creatures co-inhabit with realistic portraits and scenes of daily life.

Their creators flocked from across the North African kingdom and beyond to Rabat last week for Jidar – Arabic for "wall" – a festival dedicated to street art.

Lhamzi used the side of a house in the working-class district of Yaacoub Al Mansour for his latest work, a man with six ears and green and pink skin floating in darkness, with clouds that echo Vincent van Gogh's Starry Night.

The 25-year-old, who goes by the alias Bo3bo3, completed his first murals in the seaside city of Agadir four years ago. 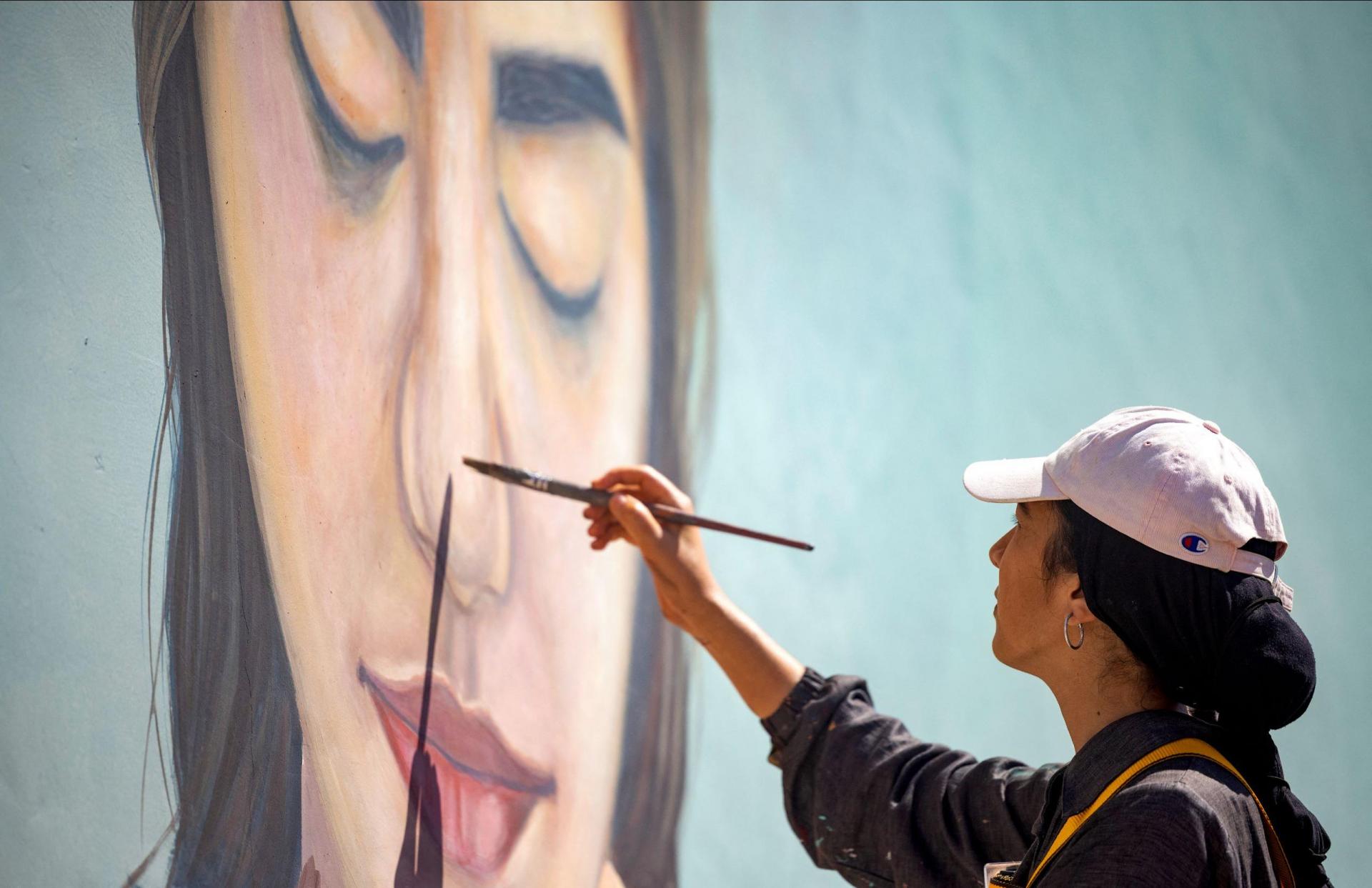 Moroccan street artist Imane Droby works on a mural during the ‘Jidar’ street art festival in the capital Rabat.

But he had not been expecting it to become his main field when he graduated in 2018 from the prestigious National School of Fine Arts in the northern city of Tetouan.

"I never imagined that my work would be visible in the public space," he said.

Today, however, he covers walls with bright colours, creating a surrealist world full of references to skating and video games, breaking the monotony of the urban landscape.

In another part of the capital, Imane Droby perches on a stool in front of a school wall, tracing out a realistic portrait of a woman embroidering.

The 36-year-old from Casablanca says she, too, fell into painting murals "sort of by accident".

"I got a taste for it. It's great to transform a blank wall into a work of art," she said.

Artist Omar Lhamzi donned a bright yellow vest and paint-splattered shoes, selected a brush and set to work on his latest canvas – the wall of a house in Morocco's seaside capital Rabat. Video: Hicham Rafih/AFPTV/AFP

She added that street art "is difficult for everyone but even more so for women. You have make double the effort to make your mark."

It is an art form that has flourished since the early 2000s in Morocco's commercial capital of Casablanca.

A decade later in 2013, the Sbagha Bagha festival stirred a new level of public interest in murals.

"At first it was really complicated, because unlike graffiti or stencilling, painting murals requires organisation," said Salah Malouli, artistic director of Sbagha Bagha and Jidar.

"At the time, nobody felt comfortable working in public. There was lots of apprehension."

But today, both residents and institutions show more interest in murals, Malouli said, and in recent years the artworks have graced walls not just in big cities like tourist hub Marrakesh but also in more remote areas.

The artworks are not always valued by landlords or the authorities.

The municipality of the northern port city of Tangiers sparked outrage over the summer by starting to erase a tribute to French-Moroccan photographer Leila Alaoui, who was killed in a 2016 jihadist attack in Burkina Faso. The authorities later reversed the decision.

Malouli said the artworks are most vulnerable in Casablanca, where flyposting often covers walls.

"Public space is invaded by informal advertising, which complicates our work," he said.

Yet for the artists involved in Jidar, there is no question of giving up. 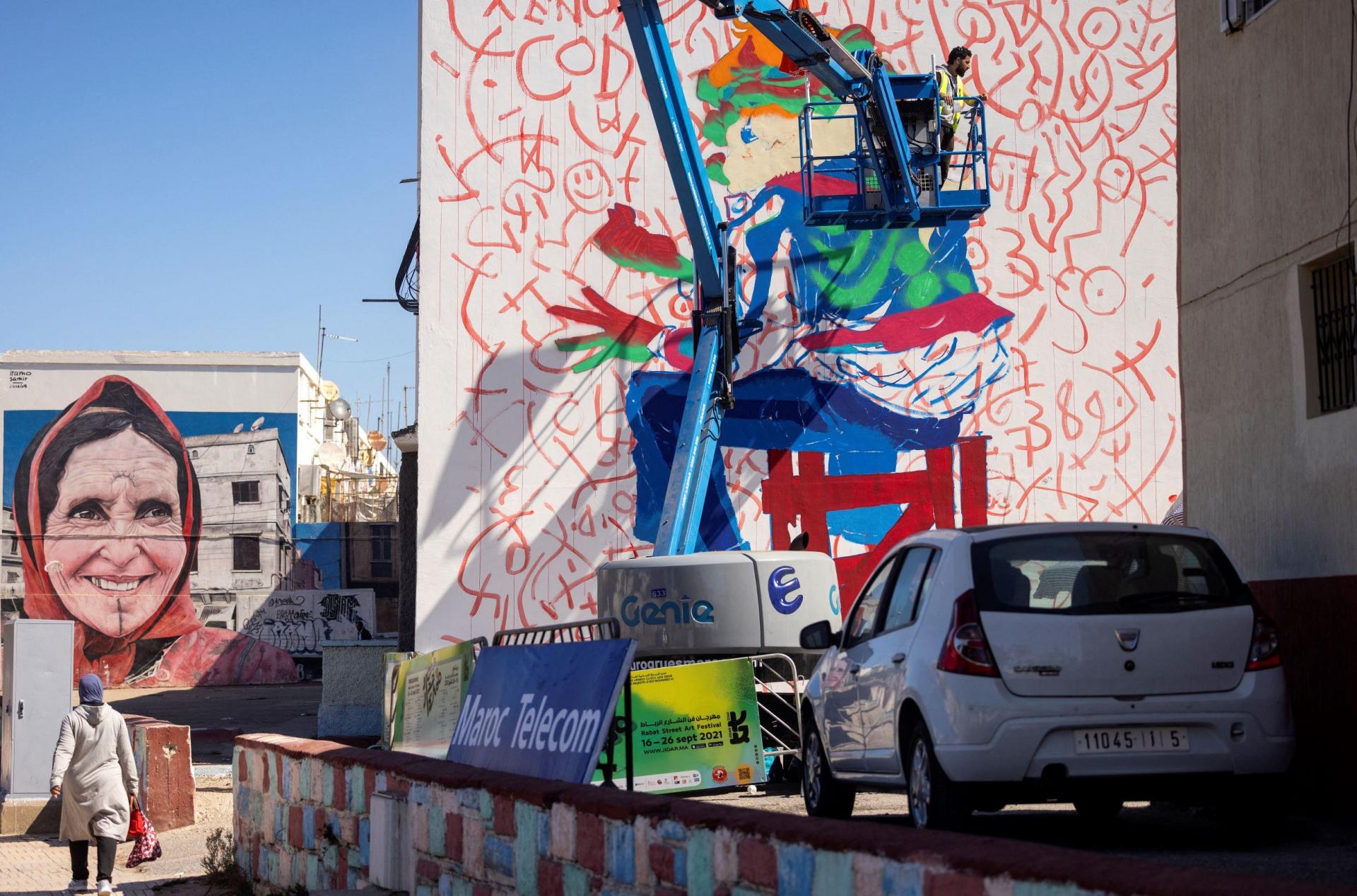 A wander through Rabat's avenues and alleyways reveals an array of freshly-painted works, in which larger-than-life fantasy creatures co-inhabit with realistic portraits and scenes of daily life.

"It's the price of working in public space – you have to accept what happens, both good and bad," Malouli said.

Despite the challenges, Lhamzi sees street art as a way of "learning to speak and listen to people".

And every year, the scene is growing, with new artists contributing to a collective wall – just as Lhamzi and Droby started out.

For visual artist Yassine Balbzioui who managed the wall this year, the art form has wings.

In the street, "everything is possible", he said.