A man who moved to Europe from Syria in pursuit of artistic freedom is basing one of his next projects on Maltese culture, migration and the cult of St Paul .

Khaled Barakeh first came to Malta in 2011 as part of a group of artists from the Städelschule, a contemporary fine arts academy in Frankfurt which had organised a three-day street art performance in Valletta called When in Rome. 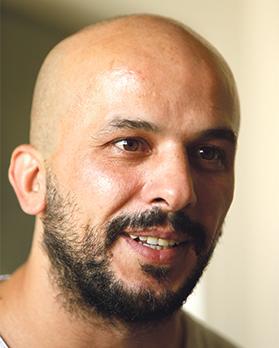 During that visit, he met a Somali refugee who was “caught in limbo” in Malta.

He returned to Malta this week, brought over by the Valletta 2018 Foundation as part of its international strategy for the cultural programme of 2018, when the city will be crowned European cultural capital.

Since his research is still under way, Mr Barakeh will keep us guessing about the final result until next year, and for now he will only say that it has to do with Maltese culture, migration and St Paul.

The 40-year-old artist shares his birthplace with where St Paul is believed to have converted to Christianity.

Mr Barakeh was born in Damascus and is based in Berlin. He is internationally known as an artist and activist, but he managed to keep the two separate until a few years ago.

His artistic skills were discovered when he was conscripted into the Syrian army aged 18 and tasked with painting portraits of Hafez al-Assad, Syria’s former president.

Back then, Mr Barakeh could not show apathy for the dictator, as that would have meant imprisonment, execution or exile.

When his term in the army, which included nine imprisonments as punishment, was up, he graduated in fine arts.

What looks like an abstract print is a digital stamp of fresh wounds from a police interrogation. Photos provided by Khaled Barakeh

But it was not until 2003, when he was visiting a friend in Paris, that he got an “artistic cultural shock”.

Wounds will heal, but not disappear. They leave a scar

“I decided to come to Europe and study contemporary art. I also wanted to find my identity,” he said.

Mr Barakeh does not identify himself as a Syrian artist, as he does not want to be categorised as just that: “I’m an artist who happens to be Syrian. My identity is not limited to my nationality… it’s larger than that.”

It took Mr Barakeh until 2008 to move to Denmark, as he had to save up, and two years later he moved to Germany, where he lives now. He travelled between his home town and Europe until 2011.

Feeling guilty about leaving Syria while the revolution boiled over, he joined other Syrians abroad to raise funds and awareness on social media.

Still, he did not feel he should combine his artistic work and activism surrounding the Syrian war yet, as he did not want to derive any personal benefit out of people’s suffering. 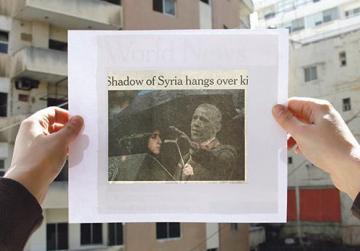 Transparencies uses light to collapse the front and the back of a newspaper page into one composition, simultaneously revealing a new image altogether.

But by 2013, he felt he was physically in Germany and emotionally in Syria, and he realised that those around him were becoming immune to the daily suffering.

Since then, he has created three projects related to the Syrian revolution, one of which is called Regarding the Pain of Others, which required smuggling a na’ash (a funerary stretcher) out of Syria through Jordan.

Mr Barakeh used the pieces of the dismantled na’ash – which had carried 135 bodies during the revolution – to build a chair, a symbol of power reflecting the strength of the people who come together to mourn the dead.

The chair lies in a gallery in Frankfurt beneath another installation: five sheets as long as a human body that are bound together like a notebook.

Imprinted on the first sheet is what looks like an abstract shape, but is actually a stamp of the wounds that a friend received during a police interrogation. 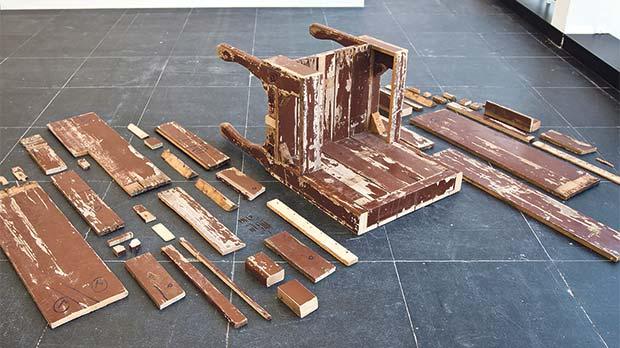 Regarding the Pain of Others required smuggling a funerary stretcher, which the artist turned into a chair, a symbol of power.

The stamp fades on the subsequent prints but does not disappear altogether. 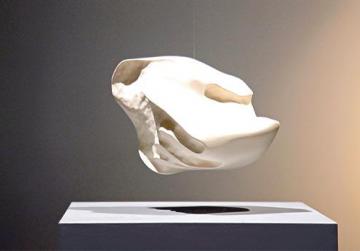 The Shake –Materialising the Distance is an installation inspired by Maurice Harron’s Northern Irish sculpture Hands Across the Divide in the city of Derry-Londonderry, motivated by the ongoing conflict between Catholic and Protestant populations.

“Wounds will heal, but not disappear. They leave a scar,” he says.

The third project is a series of photos of people holding up the corpses of war victims – mostly children.

The bodies of the deceased were, however, peeled away by Mr Barakeh, a reflection of Western media’s ban on graphic images.

“This project reflects three layers of violence: that of war, that of peeling off the bodies and that of the media’s refusal to publish such photos.”