Aggrieved that the government’s decision to pay €15,000 for a painting of his was questioned in Parliament, artist Patrick Dalli contacted the MP who raised the matter to tell her nobody “had the right” to value his works.

Mr Dalli, the husband of Equality Minister Helena Dalli, made this controversial assertion in a text message sent to Nationalist MP Therese Comodini Cachia soon after her intervention in Parliament on Monday. 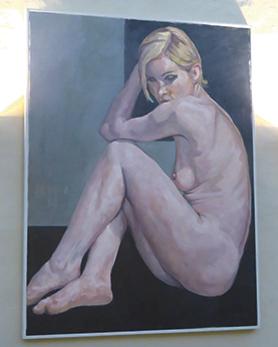 Speaking during the debate on the Culture Ministry’s financial estimates, she referred to the controversial acquisition of an oil on canvas painting by Mr Dalli in 2017.

Endorsed by State agency Heritage Malta, the purchase was made by the Office of the Prime Minister and the painting was hung at the Girgenti summer residence in Siġġiewi. The painting was bought through a fund intended for the acquisition of contemporary Maltese works of art. A photograph of the painting and its location were only revealed after this newspaper made a request under the Freedom of Information Act.

Apart from the €15,000 price tag, which was deemed excessive by some art critics, eyebrows were also raised because the Office of the Prime Minister bought the painting directly from Mr Dalli.

In her address, Dr Comodini Cachia noted that the money in the special fund used to purchase the painting amounted to just €60,000 and had not been increased for the past three years.

Declaring she would not enter into the artistic merits of the painting, she insisted it was her duty to raise certain issues. “Who did the valuation? Can the minister table in Parliament the criteria [used to value this painting]? For many families, €15,000 exceeds a year’s salary,” she commented.

“I expect an explanation from the minister on why choose this painting and not one by other artists and also how the price was established,” Dr Comodini Cachia added.

She called for more transparency and better governance of the fund.

Evidently aggrieved by what she said, Mr Dalli sent an SMS to Dr Comodini Cachia and did not mince words to make his point. The issue went public after the MP published the text on her Facebook wall yesterday.

Branding her questions “partisan” in nature, Mr Dalli insisted he was the only one who set the prices for his own paintings. “Nobody has the right to estimate the value of my works,” he declared.

The artist also invited the MP to contact the “international art galleries”, which, he said, had asked him to exhibit his works.

Dr Comodini Cachia interpreted the outburst as an endorsement of the status quo, saying Mr Dalli wanted to decide for himself how much taxpayers’ money the government should spend on his painting.