How would you describe your style and technique and how has it developed over the years?

AS: It’s contemporary conceptual artwork but not disconnected from emotive qualities. A work often starts off with an emotional response to an experience. I then construct narratives that visually express ideas and emotions. The ideas and emotions behind the work inform the creative processes I employ, which is why the artworks differ considerably from one series of works to another.

I have always been interested in the influence of the environment on our human patterns of behaviour. My earlier works as an artist started with sculptures and installations. I would use metaphors to tease out concepts and experiences. I was interested in how the urban landscape, the ever-changing built environment, the physicality of it and the building industry influences our behaviour. 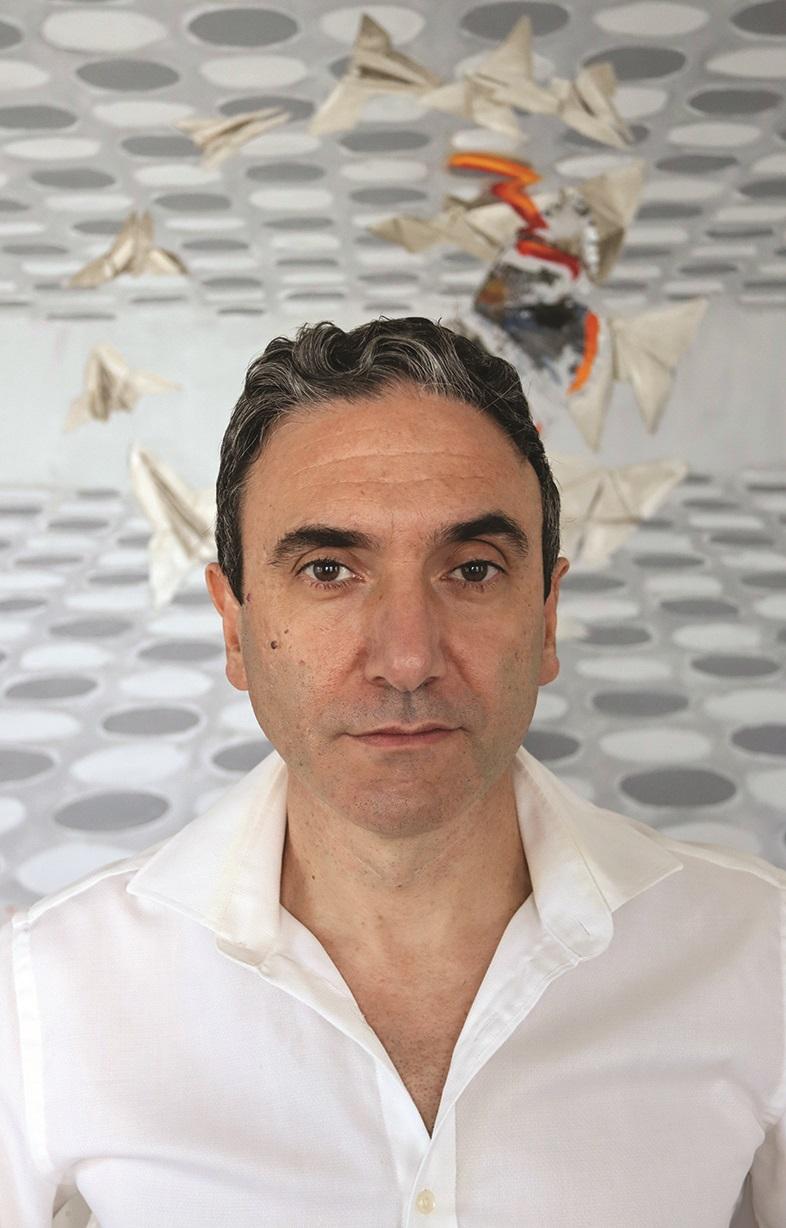 During my master’s in fine arts at Wimbledon College of Arts, London, I gradually shifted towards video installations and started to work more along the lines of fictional narratives to express feelings and thoughts about distant relationships. Later, painting with mixed media became my main medium of expression. I would juxtapose images to reconstruct imaginary landscapes, transfer them to canvas and complete the canvases with acrylic or oil painting where distant places come together. For a number of years, I have predominantly been creating oil paintings exploring notions of connectivity but this does not mean that I will not return to previous forms of media practices. 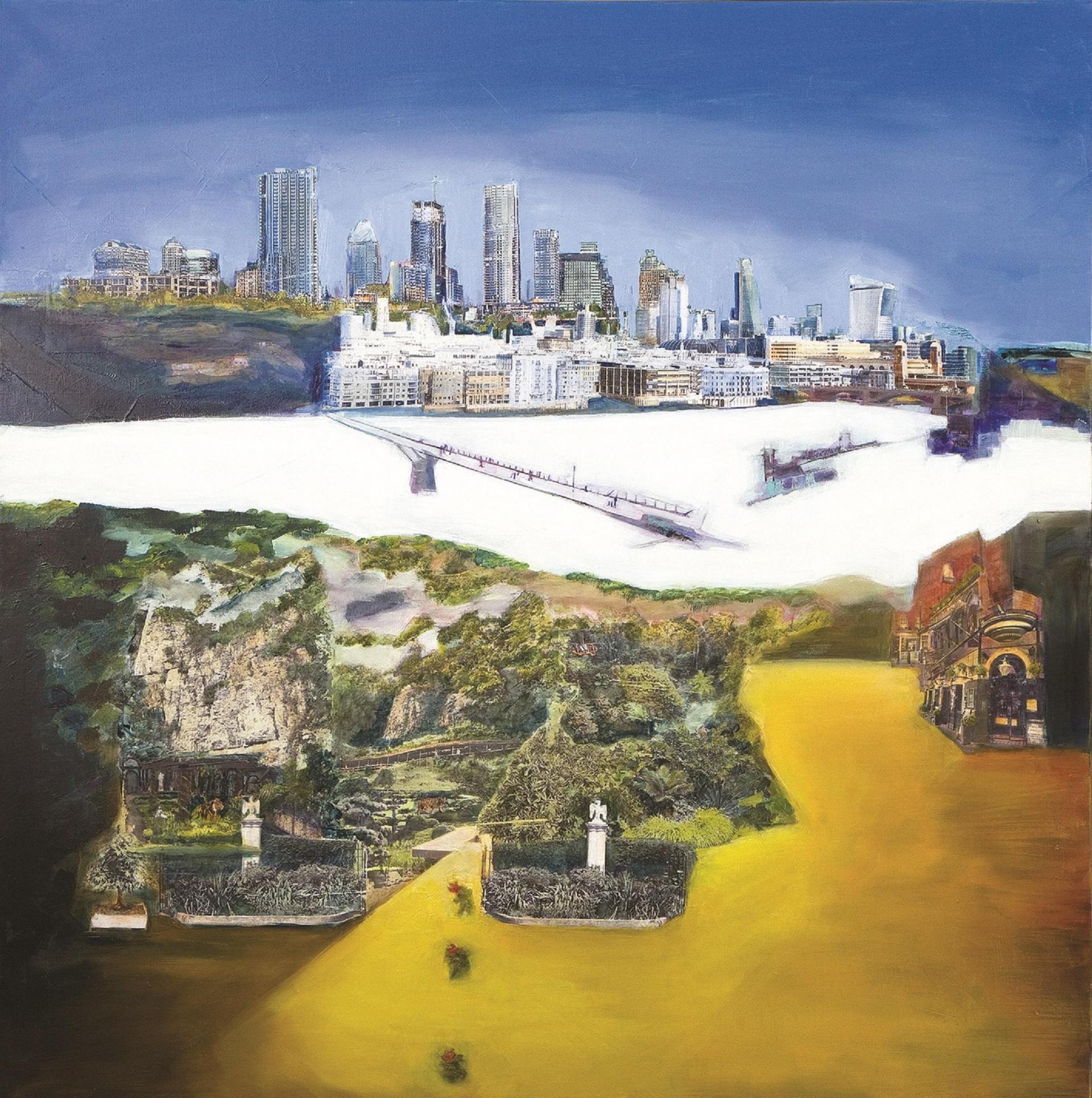 You refer to multiple realities within your painting Bridge. What is the meaning behind this?

AS: Once I completed my studies in the UK, I continued to be very active internationally. This is quite evident as my imagery is quite London-centric.

I would walk around London taking photos and in my art studio I would render a digitally manipulated landscape and throw in images from other cities around the world. Once I transferred the imagery to canvas, I would paint this collage into an imaginary world of fact and fiction based on personal memories, anxieties and desires. 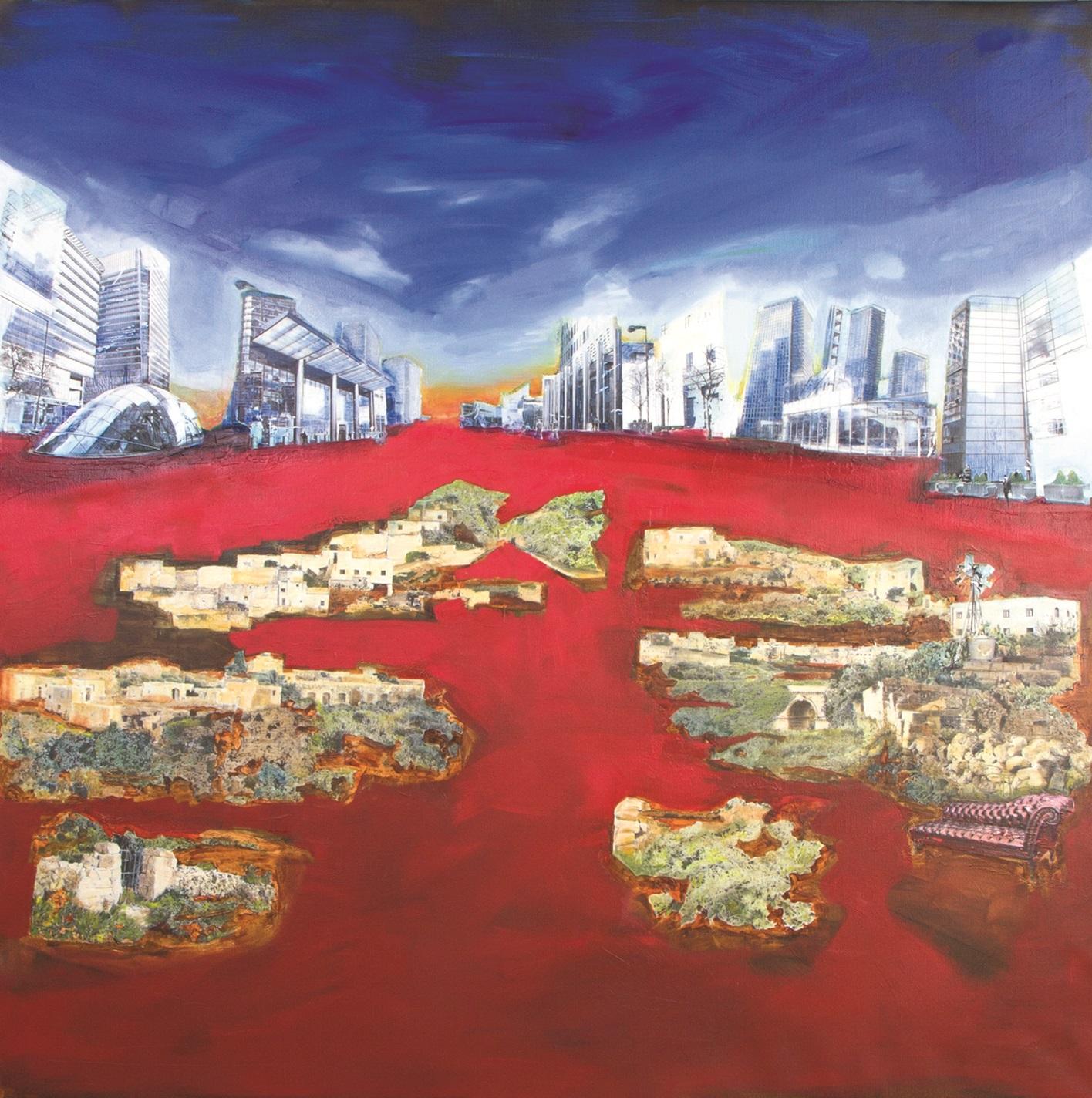 The idea behind this process was to express the experience of living in more than one place. My interest grew as I started to think more about how we live in a world where we inhabit more than one space − virtually and physically − each with its own forces pulling at our sense of being.

Our socially constructed world demands that we are made up of multiple selves. We merge work with our private lives; our private and public spaces bleed into each other. Our socially constructed identities are in constant flux: through relocation, social groups, social media, changing technological environments, political and social dynamic, cultural diversity, integration and influences.

The constructed landscape would be brought to life with painting. The need to give physical presence to distant places harked back to the time when I was communicating with my family in Malta from London on Skype without any tactile interaction.

How has your painting developed over the years?

AS: My focus has always been and remains the influence of the constructed environment on patterns of human behaviour. Over time, I have explored different facets as shown throughout my artwork over the years. Mixed media techniques on canvas allowed me to imagine physical presence within a digital world. 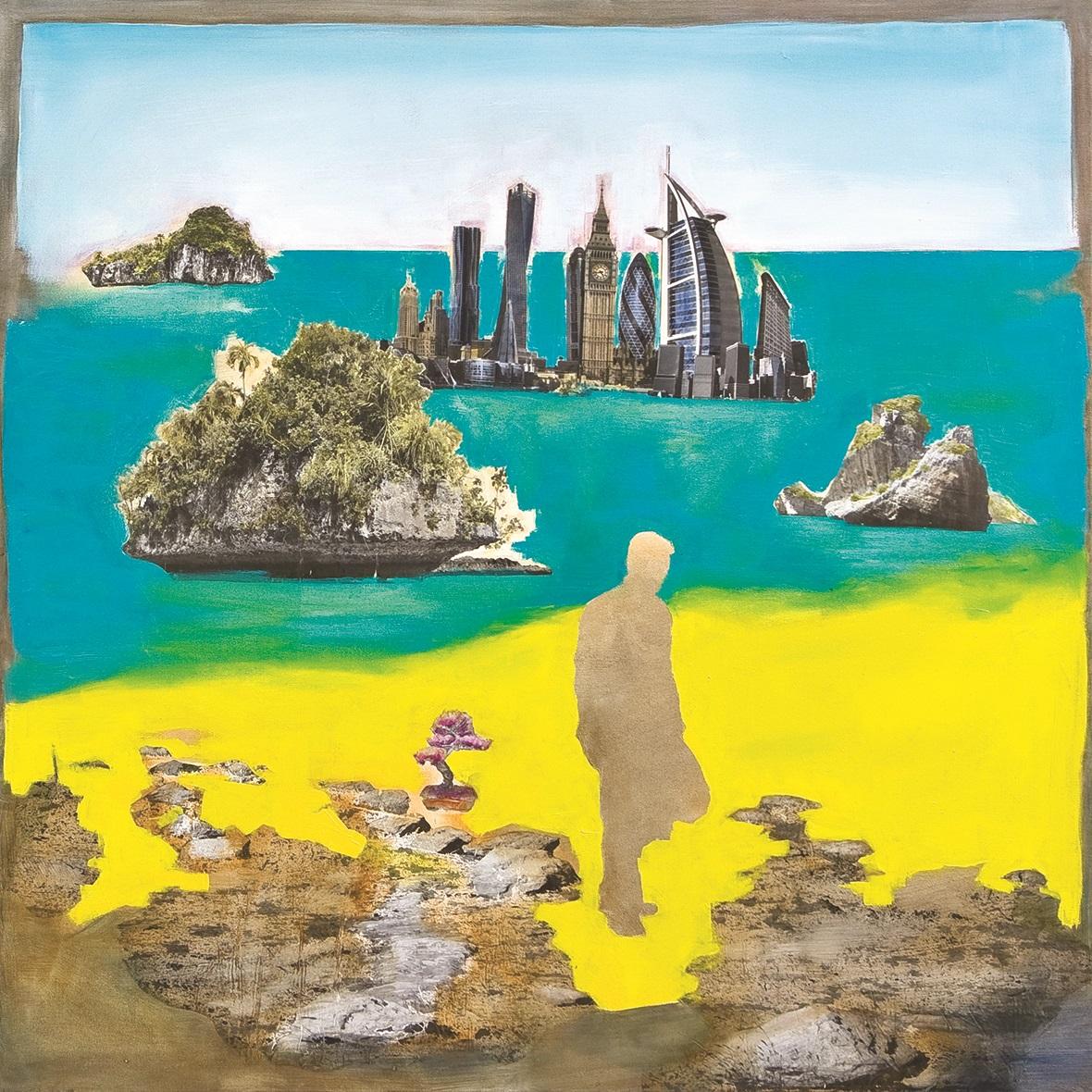 The Man with his Jacket

Focus shifted into a kind of posthuman relationship with the environment. I would paint landscapes, objects and events that tap into each other through shape assimilation. Landscapes became visual streams of data, one connecting to the other.

A common shape, line or pathway across canvas would be the visual element to connect these ‘landscape-data-streams’. Later, my interest turned to living in the unsettling social events and I started to think about life pulsating between utopia and dystopia scenarios. The canvases would have imagery of both states intertwined on canvas. 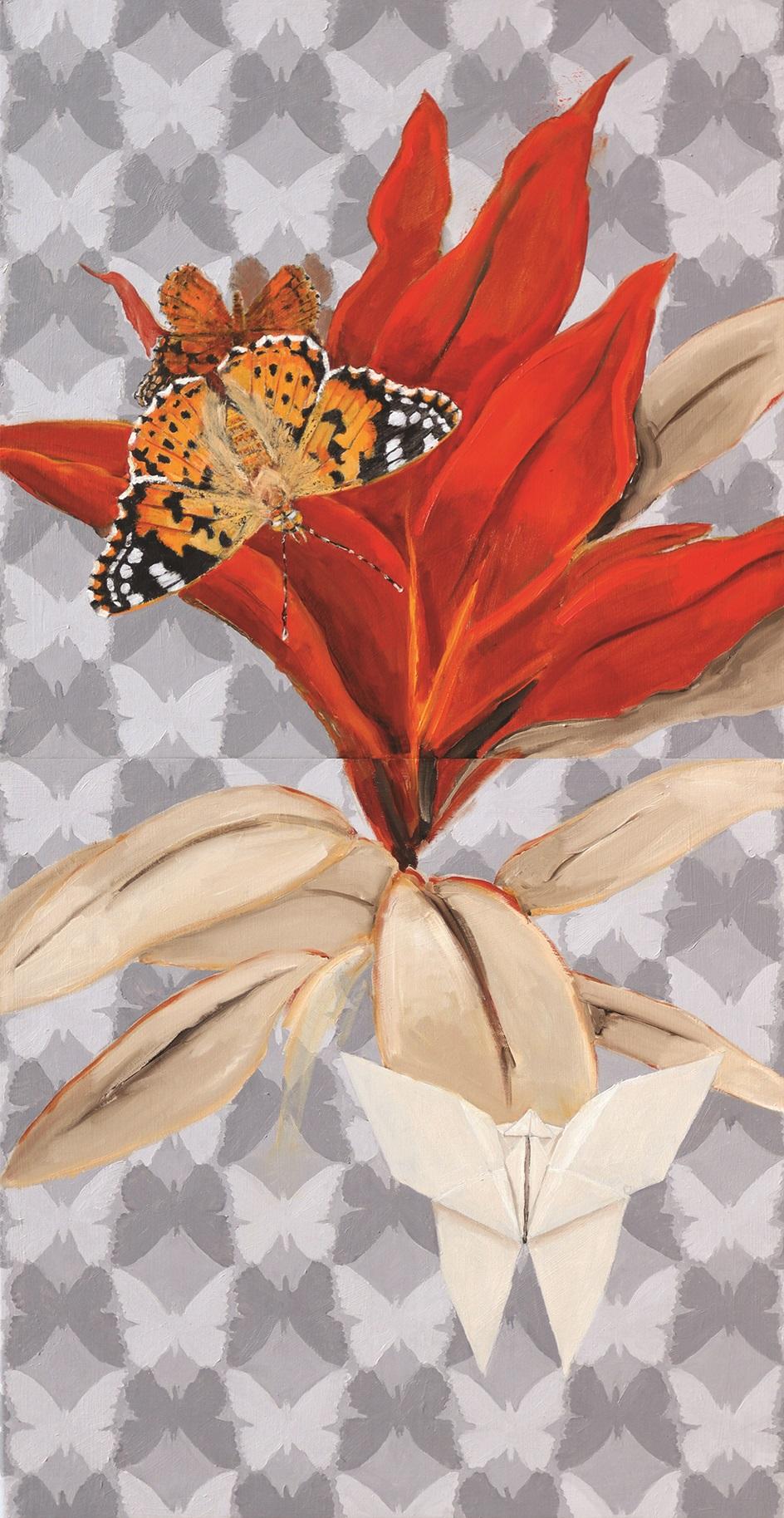 Eventually, butterflies became my mainstay. I form analogical narratives about human patterns of behaviour within a socially constructed environment estranged from nature. The sense of self remains fragile, fluid and ambiguous as the self, connects, disconnects and reconnects.

What have you got planned since your move to the UAE? And what have you been up too art-wise since being there?

AS: Recently, I was invited by the artistic director Nezar Andary of the Al Sidr Environmental Film Festival, which was held at Manarat al Saadiyat, a main art centre in Abu Dhabi. I participated as a visual artist in conversation with film-maker Alexis Gambis. My paintings were curated in the same cine­ma space of the screening of his Sundance award-winning (Alfred P. Sloan Feature Film Prize) fiction film Son of Monarchs.

I am exploring different artistic collaborations in the UAE and will continue with other international opportunities. I have also been invited to join a major art centre in Dubai with my own studio space within an art community. 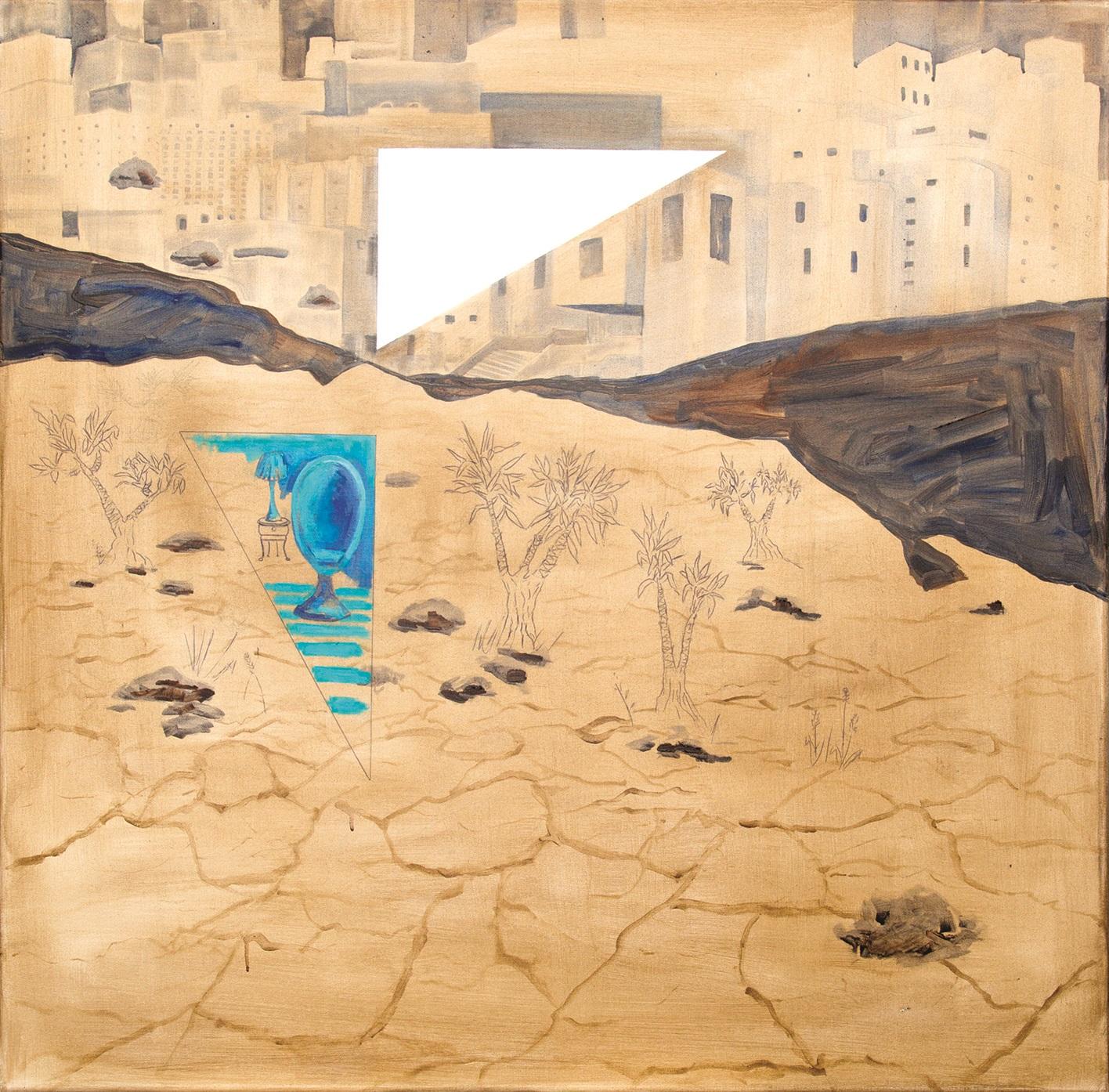 Can you tell us a bit about your choice of titles?

AS: I’m always wary of titles. I don’t want to dictate what one must see. I appreciate that I don’t need to be direct and forceful and could just give a gentle poetic nudge into a context. But I quite like the mundane titles. The title simply references the protagonist and then the visual narrative starts to unfold and dig deeper. 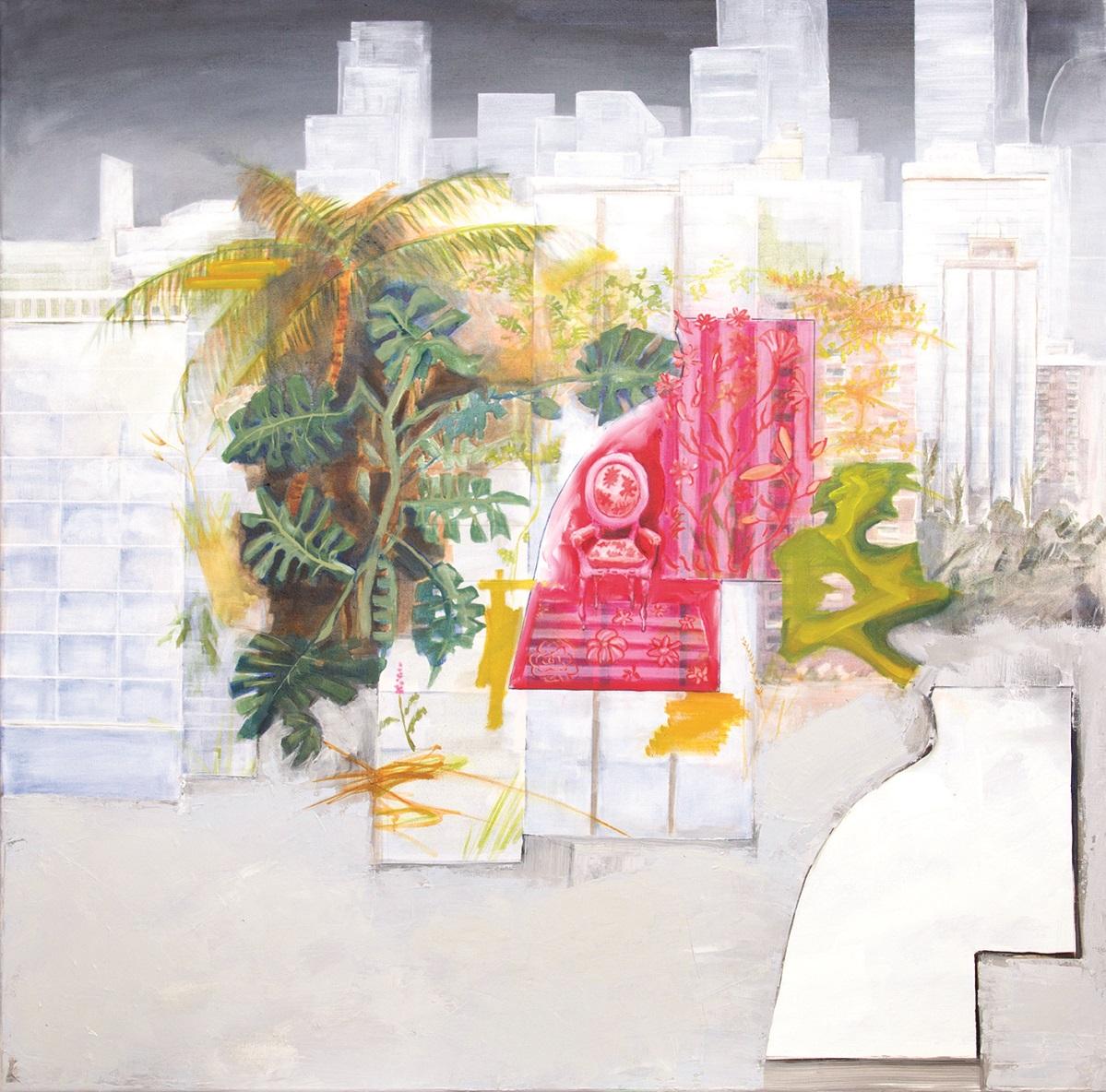 How would you describe this collection on show?

AS: The collection on show will consist of some sculptures, prints and mainly paintings. It is a mix of different series of works. The artworks tend to be open-ended narratives. The work aims to form a dialogue with the audience by raising questions about personal experiences within social constructs. 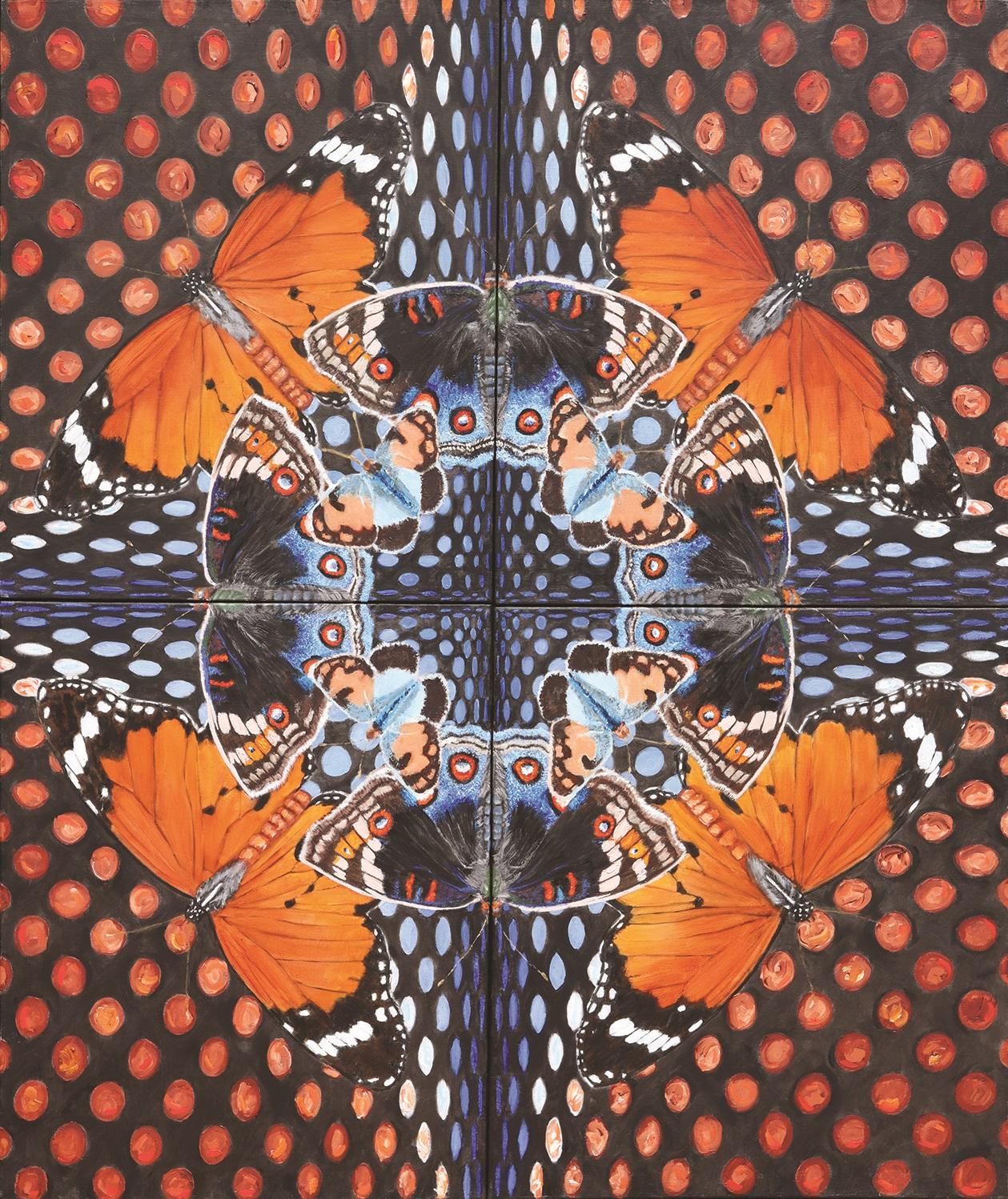 The exhibition is open at Lily Agius Gallery in Sliema until Friday from 10am to 7pm. For more information, view www.artsy.net/lily-agius-gallery or call 9929 2488.