Day nine of the electoral campaign is underway on Tuesday with both main parties and other electoral candidates set to hold events to detail further pledges.

8.45pm That's all from us today. We'll be back tomorrow to give you more 2022 election updates, as they happen. Thank you for having joined us.

8.30pm While Abela was speaking in Mosta, Opposition leader Bernard Grech was addressing supporters in Żejtun.

He promised that a Nationalist government would remove “disproportionate” burdens on non-governmental organisations, by reducing the “red tape” and bureaucracy.

“We are not saying we will remove all bureaucracy, but we cannot have a ‘one size fits all’ mentality or treat our NGOs as if they are money launderers.

”He said a Nationalist government will focus on promoting and celebrating the Maltese identity, culture, and traditions. In this vein, the party is proposing a national support program for voluntary organisations to promote local traditions, such as lace-making or traditional Maltese music, to ensure their long-term conservation and sustainability.

Grech said the party will also focus on arts and culture supporting those who aspire for a career in the arts with a 5% tax rate on earnings up to €80,000 for professionals working in the arts sector.

Abela said this is the largest economic growth in recent years and surpasses pre-pandemic figures.

To put things into perspective, in its report, NSO has said that "GDP rose by 9.4%, following the drop of 8.3% registered a year earlier as a result of the pandemic". The growth is attributed to service activities, industry and construction.

Abela said this is the ultimate proof that this government has the necessary skill set to create an even better future for Malta, and warned supporters that Bernard Grech was never interested in the country's economic growth. Rather, he 'celebrated' Malta's greylisting and set out to scare people into thinking an election was coming every few weeks, "just so that he could jam the government's work towards economic growth".

Abela said Malta is economically recovering beyond anyone's expectations and unemployment went down by a third during the pandemic.

"Today's statistics confirm that we have the best and highest levels of employment, consumption and national wealth.

7.15pm Ian Borg was among the speakers at Labour’s event.

He told an anecdote about a Labour voter telling him that he would not be voting this time round.

“Not voting is not a solution,” Borg told the crowd. “Don’t take things for granted. Stop talking about how many votes we’re going to win by. Anyone who wants Labour and Robert Abela to lead must vote.”

Signs of concern within Labour about voters staying away?

NET and ONE stick to themselves

Nine days into the campaign, third party candidates are still waiting for ONE and NET to invite them onto their shows for political debates.

Cassola has now written to the Broadcasting Authority chairman, to note this and remind him that the regulator has a constitutional obligation to ensure fair access to all candidates during an electoral campaign.

6.47pm And now it's Labour's turn. Robert Abela is greeted with applause in Mosta.

Watch the event in the video below.

6.38pm Bernard Grech is in Malta's south this evening.

5.50pm Both Robert Abela and Bernard Grech will be out and about this evening, trying to hoover up votes.

Abela will be in Mosta (start: 6.30pm) while Grech will be further south, in Żejtun (start: 6pm).

4.29pm  From a specialised night electricity tariff, to a new anti-bribery law, and ‘green buildings’, the business community presented its election wish list to politicians on Tuesday.

The Malta Chamber of Commerce met with the Labour Party to present its recommendations for the next legislature.

Its document lays out dozens of proposals across five pillars which the chamber says are key for the country to move forward.

The chamber’s suggestions include proposals for Malta’s economic recovery in the aftermath of the pandemic, good governance reforms, investment in human capital, digitalisation, and sustainability.

We're including a link to the full report in the box just above this.

It’s 54 pages split into four different chapters and, as all manifestos do, runs the gamut of societal issues.

It’s probably the most controversial manifesto to ever be proposed in local politics. Abortion, euthanasia, and prostitution all feature.

Here are some of the proposals that caught our eye, in no particular order:

2.25pm Both major parties held press conferences a short while ago. Here's the crash course version. The links will give you the full stories.

PN: Spoke about pensions and proposals concerning the elderly. They include:

Labour: Said the PN's proposal on pre-1995 house rents will cut down financial aid to the most vulnerable people, eventually forcing them out of their homes.

1.30pm ADPD has written to the Broadcasting Authority, requesting, as it does every election, fairer time allocation on TV. The party, which does not have its own media house, also expressed disappointment that it had not been scheduled to debate the major parties.

ADPD is urging BA to:

1.20pm The Labour Party has called its own press conference, to be addressed by Roderick Galdes and Stefan Zrinzo Azzopardi, at 2pm.

Meanwhile, the PN's David Agius is talking up the party's electoral programme. Watch it in the video below.

12.58pm Last week, it was all about division within the PN. Now Labour’s publicity machine is taking aim at the past – or rather, what they say is Nationalist Party’s infatuation with it.

The party has put up billboards and released a campaign video focused on the PN and Bernard Grech repeatedly referencing yesteryear.

"Bernard Grech is the face of the past," the billboard reads.

So, if the PN is the past and Labour is the present… who, or what, is Malta’s future? 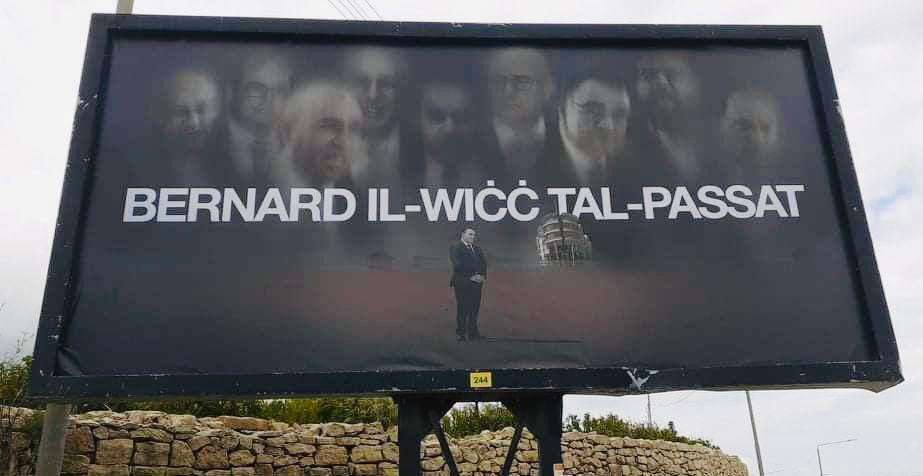 PN press conference in an hour

12.15pm We are finally being told that PN is holding its first press conference for the day at 1.15pm at its Pietá headquarters.

Vote for the environment if you want to protect it: Cassola

He is referring to a public consultation that seeks to amend laws governing daily penalties for environmental contraventions. Among others, the changes would see offenders who are subject to multiple daily penalties become liable to pay only the highest one.

Cassola is calling on those who want to protect the environment to "vote for it". 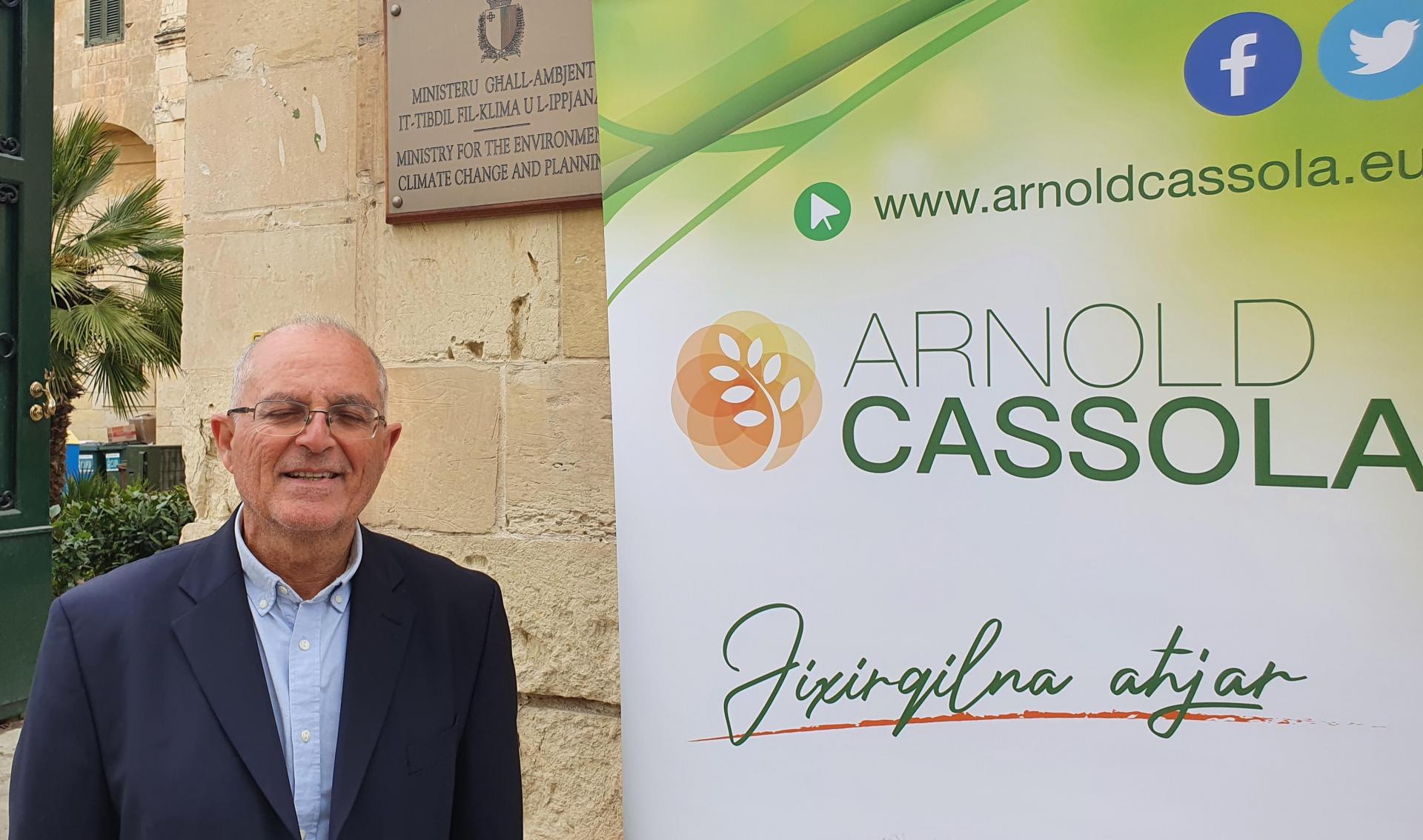 Arnold Cassola outside the Environment Ministry in Santa Venera.

11.30am Children in Malta have sent their own requests to political parties through their commissioner.

The commissioner is urging politicians to include concrete measures in their manifestos, flagging gaps in the implementation of the National Children’s Policy.

These are some of their asks:

From one leader to another: Stop this madness

10.45am As the main parties this morning seem to have taken a break from press conferences, the focus turns on the intensified Ukraine invasion.

Grech is urging Abela to stop protecting whoever he is protecting and do the right thing.

"Malta right now remains closed to Ukrainian refugees but open to Russian oligarchs and billionaires who can even pay us to get their own EU passport", he tweeted.

9.30am Political surveys published on Sunday confirmed Labour is set to win by a landslide, but further analysis of a Times of Malta survey sheds light on leaders' popularity among voters.

Interestingly, while Abela has the backing of 47% of PL voters, Grech gets 72% backing from PN voters.

You can read more here.

What's on the agenda today?

8.45am The two major parties have campaign events lined up for this evening.

Robert Abela is set to address party supporters in Mosta at 6.30pm, while Bernard Grech will visit Cospicua and Għaxaq before heading to Żejtun.

We have no details about any PN or PL morning conferences so far, however, independent candidate Arnold Cassola will be outside the Environment Ministry in Santa Venera at 11.30am to address his own press conference.