A Gozo second division match between Sannat Lions and Oratory Youths was abandoned by referee Massimo Axisa in the 90th minute after assistant referee Andrea Pavia was attacked by Sannat player Antoine Camilleri.

The player had just been sent off for a second yellow card in the final minute of the game when he lashed out at the assistant referee, hitting him a number of times, and forcing the referee to abandon the game.

The match brought against each other two teams who are fighting for promotion to the GFA Division One.

Oratory Youth were leading the match 1-0 after Justin Azzopardi put them ahead after only eight minutes of play.

The Lions thought they had drawn level six minutes from time but the goal was annulled by the referee after assistant referee Pavia flagged for an offside infringement by a Sannat players.

Tension continued to flare for the rest of the match and on 87 minutes Sannat were reduced to 10 men when Daniel Borg was shown a straight red card following a rash challenge on an opponent. 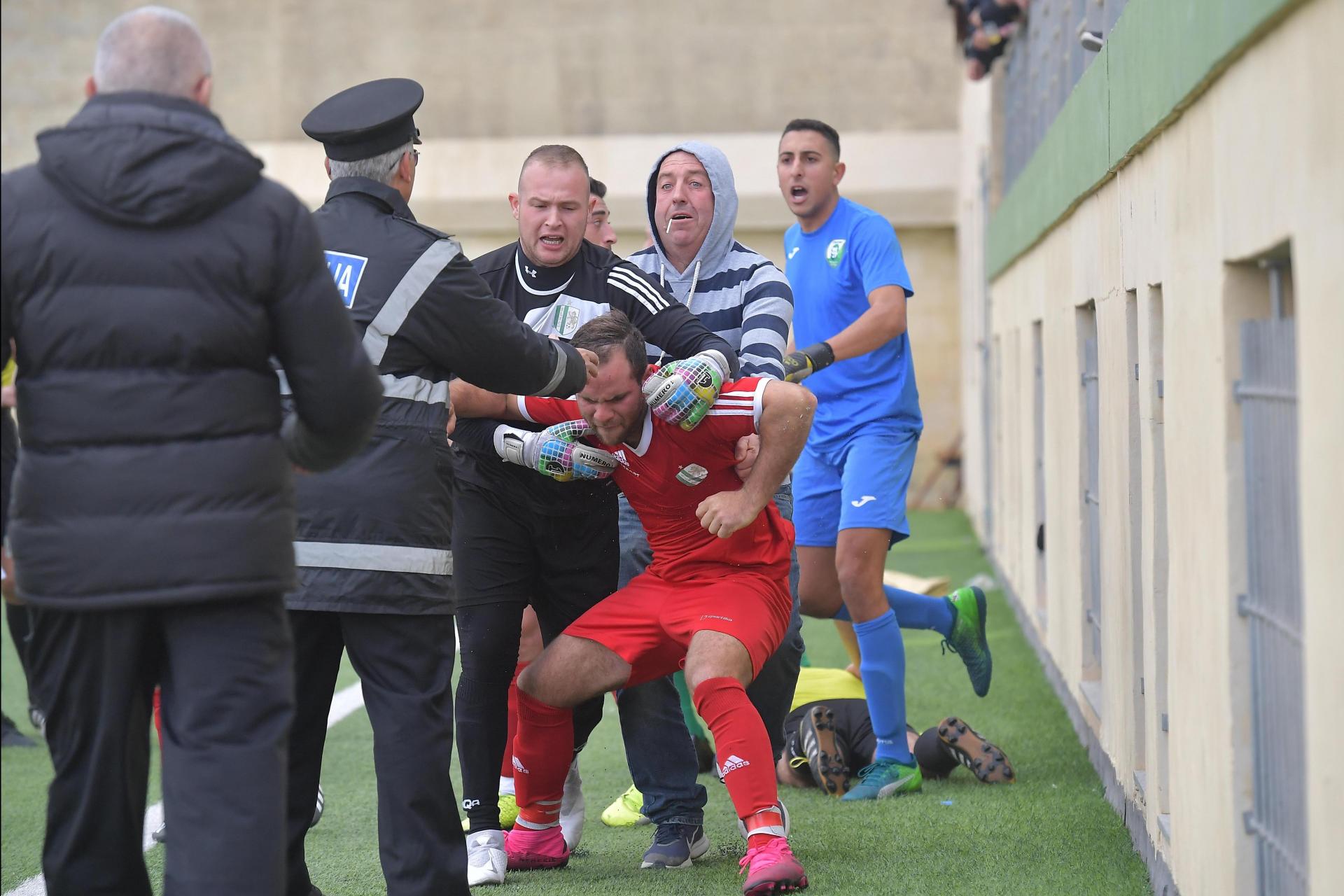 Antoine Camilleri is restrained by his team-mates after he was sent off against Oratory Youths.

A minute from time, Camilleri was shown a second yellow card by the referee after he was committed a foul and was subsequently dismissed, prompting the violent attack on the assistant referee.

The Malta Football Association condemned the actions of the Sannat player and showed is solidarity with assistant referee Pavia.

“The Association’s thoughts are with the official in question, Mr Andrea Pavia, who was the victim of the deplorable violent act. The entire football family shows solidarity with Mr Pavia as well as the other two Officials, Mr Massimo Axisa and Mr Adrian Caruana.

“There is no place for violence in football. Cowardly attacks such as this one tarnish the game and runs contrary to the very values it fosters such as discipline and unity. The Association trusts its disciplinary bodies will be taking all the necessary sporting measures to ensure that such acts are sanctioned and that everybody carries responsibility for their action.

“It also solicits the Gozo Football Association and the club in question to take appropriate measures to avoid repetition of such acts."

"As Opposition spokesman for sport I condenm every kind of violence in sport," he said.

"There is no place for violence in sporting events."

This is not the first time that a referee was assaulted in Gozitan football. Last February, referee Joseph Agius was attacked by a player during a second division match between Qala Saints and Oratory Youths.