The average annual basic salary rose to €19,484 in the second quarter of this year from €18,942 in the same period last year, according to Labour Force Survey estimates.

The finance sector paid the best salaries, followed by information and communications.

The highest basic salary was recorded in the Financial and insurance activities sector. Average annual salaries there varied from €34,399 among managers to €12,370 among persons employed in elementary occupations. 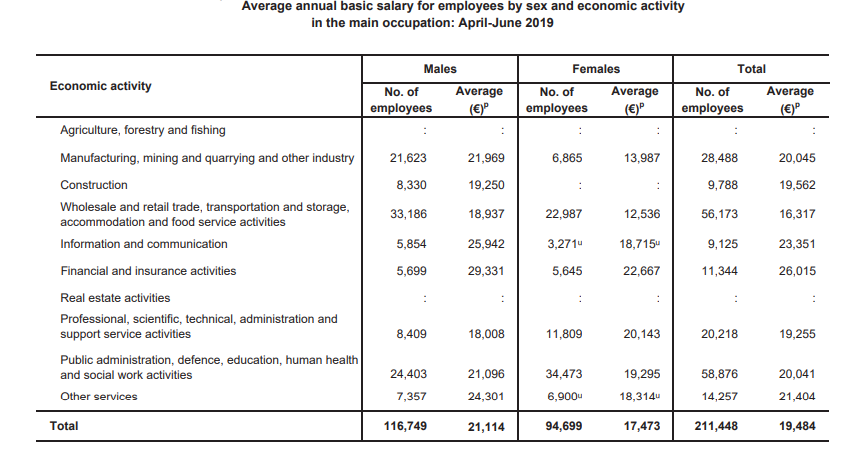 The survey found that employment increased by 7% in the second quarter of this year when compared to the corresponding quarter of 2018.

Total employment stood at 251,700 accounting for more than half the population aged 15 and over.

The activity rate for the quarter under review was estimated at 75.7 per cent with the highest rate recorded among persons aged 25 to 54 (88.4 per cent).

On average, out of every 100 persons aged between 15 to 64 years, 73 were employed. The employment rate for men in this age bracket was 80.7 per cent while that for women stood at 64.6 per cent.

The largest share of employed persons was recorded among persons aged between 25 and 34 years.

Self-employed persons accounted for 15.9 per cent of all persons with a main job.

The majority of employed persons worked on a full-time basis totalling 217,843 and 33,857 had a part-time job as their primary employment. On average, full-timers worked 42.3 hours while part-timers worked 2  hours per week.

The unemployed and inactive population

The unemployment rate for the second quarter of 2019 stood at 3.4 per cent. The largest share of unemployed persons was recorded among persons aged 25 to 74 years. Among the unemployed, 77.6 per cent stated that they had been seeking work for less than 12 months.

Among inactive persons, the main reason for inactivity related to persons reaching retirement age or taking up early retirement (40.8 per cent).

PN: Salaries are rising at half the EU average

The Nationalist Party in a statement said that according to government and EU data, wage inflation in Malta was 1.1% while the EU average growth was 2.9%.

At the same time, data issued by the National Statistics Office last week showed food price inflation of 3.75%, well ahead of the EU average.

This meant a double blow to Malta's workers, the party said.

It underlined proposals it has made in its pre-budget document, including reducing income tax on overtime and part-time work to 10%.