The average Maltese household had income of €33,573 in 2017, the National Statistics Office said on Wednesday.

Disposable income is the amount of money available for spending after taxes, social contributions and alimonies are deducted.

The figures, released on Wednesday by the National Statistics Office, were compiled for the European Statistics on Income and Living Conditions (EU-SILC) survey.

The percentage of Malta's population that is at risk of poverty or social exclusion declined marginally in 2018, with another drop also registered in the share of people who are materially deprived.

It was the fifth straight year that overall percentages of people living in poverty or on its fringes declined.

When social exclusion risks were factored out of the data, the at-risk of poverty rate increased marginally to 21.4 per cent, from 21.2 per cent in 2017.

The NSO said that in 2018, the severe material deprivation rate (SMD) among persons living in households was 3.0 per cent - 0.3 percentage points less than in 2017. 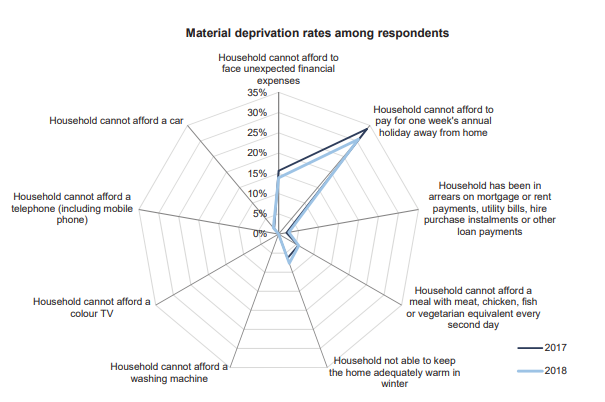 At 19.0 per cent, the at-risk-of-poverty or social exclusion rate (AROPE) decreased by 0.3 percentage points when compared to EU-SILC 2017.

According to NSO calculations, 78,685 people lived with income below the at-risk-of-poverty line (€8,868) that year. This translated into an at-risk-of-poverty (ARP) rate of 16.8 per cent, 0.1 percentage points higher than the previous year.

The statistics show how children and people of working age are far less likely to be at risk of poverty or social exclusion now than five years ago. 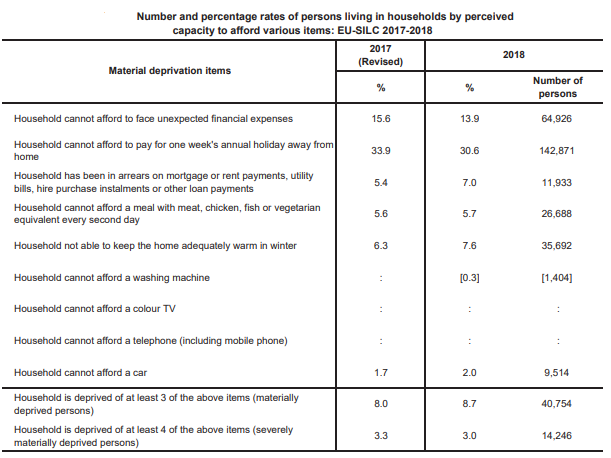 What do people struggle to afford?

Those gains are effectively wiped out when social exclusion criteria are excluded.

However, over 65s are in an increasingly vulnerable position, the data suggests.

Social Solidarity Minister Michael Falzon said he was pleased with the results.

Addressing a press conference, Dr Falzon said persons at risk of poverty had dropped for the fifth year in a row.

Asked if rampant economic growth experienced in recent years was making it difficult for certain sectors of society to keep up, the Minister said the trend had so far been “positive”. 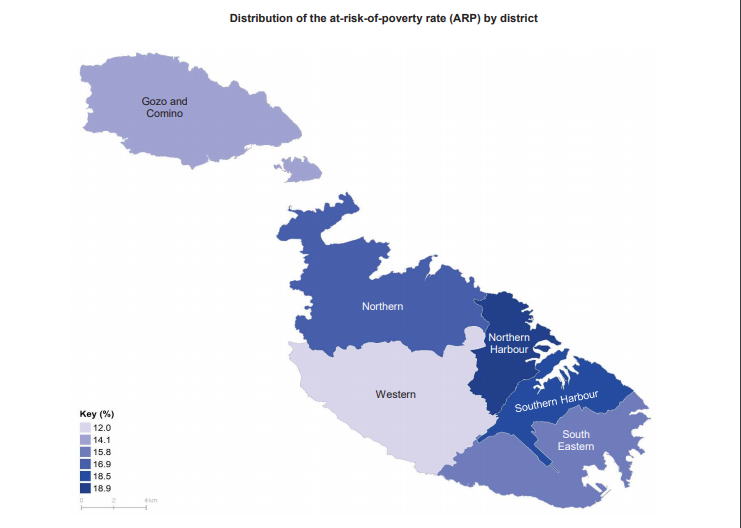 The highest proportional share of poverty is concentrated in the Northern Harbour distric. 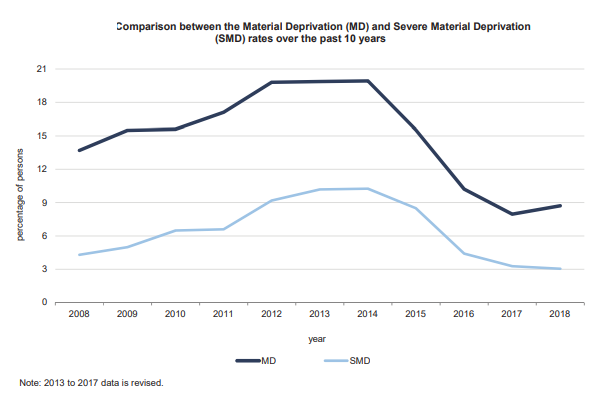 Dr Falzon said that the increase in the share of over 65s at risk of poverty could be in part due to many pensioners actually improving their lot and moving up the scale.

When the share of those who were severely materially deprived was included in the figures, he argued, the share of over 65s in a bad financial situation had actually decreased.

“If a number of elderly were below the poverty line and then their position improved then they would have likely moved into the at risk cohort,” he said.

The figures released on Wednesday, also give an insight into the gap between the haves and have-nots.

According to GINI coefficient figures, the gap has increased marginally across all sectors.

Asked about this phenomenon, Mark Musu, permanent secretary at the Family Ministry, said that while these had only increased by decimal points, it used to increase by around two per cent annually until just a few years ago.

During the press conference, Dr Falzon said the rate of persona at risk of poverty or social exclusion stood at 19 per cent, the lowest since 2005.

A look at the official statistics however shows that the 2018 figure, was a only marginal improvement of 0.3 per cent over the previous year.