The average Maltese worker puts in just over 41 hours a week while earning a shade over €18,000 a year, new figures released by the National Statistics Office have shown.

Data from the NSO's latest Labour Force Survey shows that the vast majority of Maltese workers are employees working full-time jobs. Almost one in every three working men ply their trade in the retail, accommodation, food service and storage sector. Women are most likely to work in public administration, education, social work and health sectors.

More than half the population aged over 15 - 56.7 per cent - has a low level of education

The Labour Force Survey is carried out on an ongoing basis using a sample of 3,200 private households. It seeks to identify labour market trends and is carried out in line with International Labour Organisation standards. 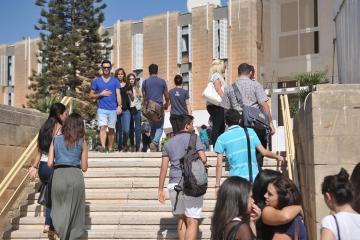 Among the key figures from this quarter's survey:

In an official statement reacting to the NSO survey, the government highlighted progress the local labour force had achieved over the past years and contrasted figures to pre-2012 ones.

It said the labour force participation rate of 65.8 per cent was the highest-ever recorded in Malta, with the rate being 7.2 percentage points lower in 2012. During that period, the percentage of working women rose from 45 per cent to 53 per cent.

The number of people in employment was also up, with 16 per cent more jobs, most of them full-time, than in 2012.

Average wages had increased by 5.7 per cent when compared to 2016, the government said, adding that the average worker now earned around €2,000 a year more than they did in March 2013.

With inflation hovering at just 0.9 per cent, workers' purchasing power had increased by 4.8 per cent over a 12-month period, the government added.