Tributes have flooded in for poet, theatre director and educator Mario Azzopardi, who died at the age of 77 on Friday.

In a statement announcing his death, the National Book Council paid tribute to his contribution to Maltese literature.

“Azzopardi was at the forefront of reshaping Maltese poetry from the 1960s onwards with themes and forms that challenged what was still written in his day. As one of the founders of the Moviment Qaqmien Lettararju he helped usher in a new era for Maltese writing,” the Council said.

Born in 1944 in Ħamrun and brought up in a very Catholic family, Azzopardi’s life revolved around academia and theatre.

In 1969 he qualified as a teacher of art with a distinction in the theory and practice of education. He resumed university studies in the nineties and graduated M.Phil. in Theatre studies with a dissertation on Maltese Theatre.

He also was the co-founder of controversial literary journals such as Il-Polz, which published radical exponents of new waves genres and in the 1980s he launched Neo, a left-wing literary magazine.

He also co-edited Analiżi, a pedagogical bi-monthly journal for students of literature, whilst teaching art, literature and drama in state schools.

Azzopardi was one of the first resident tutors at the Maltese Academy of Dramatic Art (1977-81) and served with the drama unit of the Ministry of Education. In 1979 he set up the Lyceum Youth Theatre.

Apart from his work locally, Azzopardi also conducted theatre in education projects across the globe, in London, Trento, Rovereto and Bolzano throughout the late 1980s and with Jane Maud of the Young Vic Company in London.

He was a coordinator of the International Festival for Peace, held to commemorate the Bush-Gorbachev Malta summit in 1989.

The following year, 1990, he directed The Wall in Hamburg, a project to mark the fall of the Berlin Wall.

He was also the former director of the Malta Drama Centre, who have described Azzopardi as an "important pillar" in the development of the school as well as arts education.

In 2000 he was appointed as the Education ministry's delegate on the first board of management for the St. James Cavalier Creativity Centre.

In his last publication, Epistoli mid-Deżert: Poeżiji u Poesaġġi published in 2014, Azzopardi delves into his search for God.

The Department of Maltese at the University of Malta paid tribute to Azzopardi, whose works were appreciated and studied by many Maltese students. 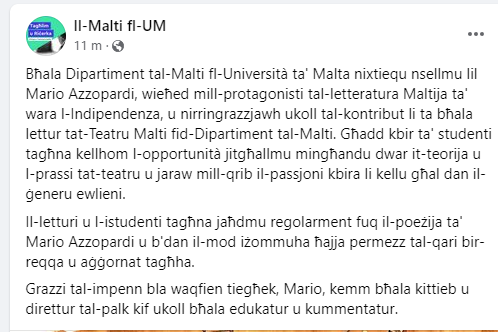 "Thank you for your unwavering commitment, Mario, both as a writer and stage director as well as as an educator and commentator."

PEN Malta said Azzopardi had consistently underlined the need for art, literature and education to instigate a radical and critical debate that questions powers.

The Carmelite Priory in Mdina also posted a heartwarming tribute to the late poet, who described Azzopardi as a 'great friend of the Carmelite community'.