Parkinson’s is a serious neurogenerative disease that affects the way body parts move.

The disease occurs due to problems with certain nerve cells in the brain. These nerve cells are usually producing the neurotransmitter dopamine, which is important for the transmission of the information of how muscles should react and therefore how parts of the body should move. 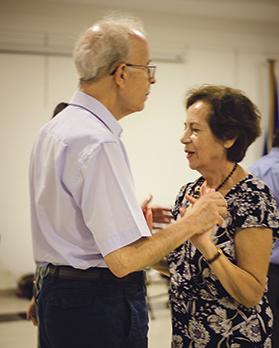 Research has shown that dance classes a beneficial effect on people with Parkinson’s disease and their caregivers.

It is still not known what ex­actly causes Parkinson’s disease, and no cure has been found. But the last decade has seen a significant increase in research into the therapeutic effect dance has on people with Parkinson’s disease.

On the basis of evidence provided by healthcare practitioners, dance scholars, neurologists and psychotherapists, it is now widely recognised that creative and expressive movement has a beneficial effect on people with Parkinson’s disease and their caregivers.

“And that is exactly what ‘Step Up for Parkinson’s’ does. It provides free specialised movement classes for people with Parkinson’s disease as well as their caregiver, which is often their spouse or other family member,” said Natalie Muschamp chairperson of Step up for Parkinson’s.

Charmaine Attard, director of AX Care said: “In Malta some 1,400 people suffer from Parkinson’s Disease. These classes are really effective and I have seen how they have helped our residents. They offer them support, interaction with others, as well as freedom of expression through movement.

“I am very proud to be hosting these regular classes at Hilltop Gardens and organising an event to raise awareness about Parkinson ’s disease.”

“Since it is so unknown, not many would know how to behave around a person who has tremors or suffers from uncontrolled movement. Step Up for Parkinson’s aims to raise more awareness and to help break this stigma, and to encourage everyone to accept who they are, and also not to feel ashamed or become isolated,” she said.