A Russian architectural firm has formally submitted to the Environment and Resources Authority its proposal for a metal replacement for the Azure Window.

The design - loved and loathed in equal measure - was submitted just a day after the government dismissed the idea of a hotel close to the site where the Azure Window stood but said it was open to proposals to develop nature trails, museums and sky observation centres, among others.

At the end of last year, architect Svetozar Andreev launched a proposal called ‘The heart of Malta’, a polygonal architectural structure consisting of mirrored steel faces.

The structure would have the same size and proportions as the original limestone arch and, according to Mr Andreev’s Russian architectural firm, it would blend with the landscape. 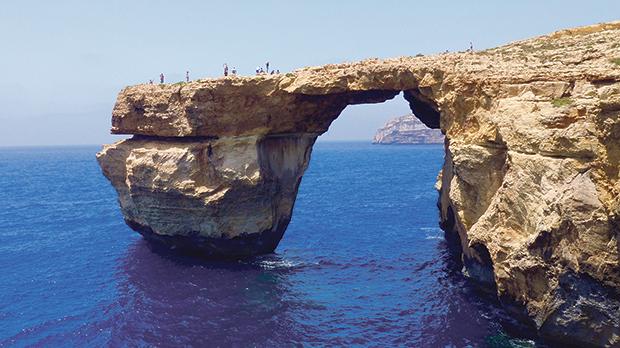 In this stock picture, visitors can be seen standing on the Azure Window just days before its collapse. Photo: Steve Zammit Lupi

When the natural ‘window’ suddenly collapsed in March 2017, the government launched an international initiative inviting people to submit ideas such as artistic installations and artificial recreations of the landmark.

However, only one submission was made in the preliminary market consultation on the setting up of the Dwejra Heritage Park issued by the Environment and Resources Authority.

An Environment Ministry spokesman told Times of Malta on Thursday the proposal outlined a number of initiatives in the area such as nature trails and paths, an interactive museum, a sky observation centre and a diving centre.

The submission also indicated that the private company owned a quarry nearby and proposed the development of a hotel there.

“While the ERA has carried out its initial evaluation of the proposal, the Environment Ministry is not considering further the development of any hotel but is still in a position to consider some of the mentioned initiatives for the area,” the spokesman added.

Read: Azure Window 'face' was there all along

When it came to the conceptualisation and development of proposed ideas for the Dwejra Heritage Park and, particularly, the Azure Window, the government remained open to consider projects that benefitted this important site, he added.

“The government will remain vigilant and will only consider for further stages ideas that strike the right balance between enhancing the visitor’s experience and, at the same time, ensuring the conservation of the natural features of the area, which is a Natura 2000 site,” the spokesman said.