It’s almost a year to the date when exposure to the elements took an irreversible toll on what was one of Malta’s most iconic landmarks – the Azure Window.

But, with numerous tourism websites still showing the natural rock formation that had put Dwejra, Gozo, on the international map, its popularity shows no signs of abating.

And even as its remains are slowly turning into a new attraction for the multitude of divers that visit the sister island, the pull of the Azure Window remains so strong that it has inspired French artist Patric Pantin to dedicate an entire exhibition to it.

It was an unimaginable event, this disappearance into the waves; we had to do something with it

Tieqa tad-Dwejra – A Tribute to the Azure Window, will showcase a series of photographic and pictorial works that take their inspiration from fragments of the arch that the artist himself brought back to the surface from the seabed where the rest of the structure now rests. 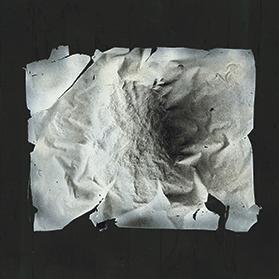 The works are based on fragments of the structure pulled up from the seabed – a scene from the bottom of the world, gone forever.

The Paris-based artist first visi­ted the Maltese islands in 2015 to take part in the Mdina Contemporary Art Biennale. He was immediately struck by the topography of Malta and Gozo, which he describes as offering very fertile ground for his imagination.

In fact, this is not the first Malta-inspired collection that has been created by the artist. Shortly after his first visit, Pantin created a large map of the archipelago from local sand, which featured in the Contemporary Art Biennale in Mdina in 2015.

“The map was 2.40 metres high, all in blue, and represented a literal transcription of my first im­pression of the islands,” he says.

Asked what led him to choose the Azure Window as the prota­gonist of his newest collection, he said the collapse of the natural arch had fascinated him. “It was an unimaginable event, this disappearance into the waves; we had to do something with it. So, a few ‘underwater exhumations’ later, I was in Paris, fragments in hand. I based the paintings on these fragments.” 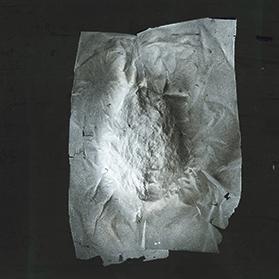 The final result is a series of works on paper, 50 x 50cm each, in black and white. Veils cover the stones, giving the illusion of a scene from the bottom of this world, gone forever.

Patrice lives and works in Pantin, near Paris, where for the last 20 years he has been honing the unique cloth technique he uses in this distinctive work.

The collection is being shown at Lazuli Art Gallery, a fair trade gallery in Victoria, between March 9 – a year to the day from the collapse – and April 1.